COLUMN: CSB players stand on solid legal ground if they decide to file case vs Amores

JRU Bomber John Amores let fly some bombs at yesterday’s NCAA game versus the College of Saint Benilde. Unfortunately, these bombs were of the illegal quality that could ultimately land the big man to jail.

Amores is currently facing a charge of serious physical injuries after his attack on UP Player Mark Belmonte a few months ago.

Let’s explore the different legal implications of his attack on CSB players.

What school sanctions can JRU levy against John Amores?

First, he may face disciplinary sanctions from his school. As a student-athlete of Jose Rizal University, Amores is under its disciplinary authority. Schools have the legal authority to sanction its students for acts of violence, especially if these occur in school-sanctioned events.

Schools could likewise impose sanctions on students who put the name and reputation of the school in a bad light. The NCAA game is obviously an event sanctioned by JRU, and attacking random opponents while wearing the school jersey for everyone to see during a live broadcast definitely puts the name of the school in disrepute.

The school has wide discretion on the sanctions it may levy on Amores. Depending on its handbook, JRU can suspend or even dismiss Amores. If Amores is on an athletic scholarship, the school may explore the possibility of revoking the scholarship based on unsportsmanlike conduct.

If it chooses to revoke the scholarship, the school, however, may not demand that Amores reimburse previous tuition costs, as this is prohibited under the Student-Athlete Protection Act.

Of course, in the course of the school’s investigation, Amores must still be given an opportunity to be heard, as this is part of his due process rights as a student. 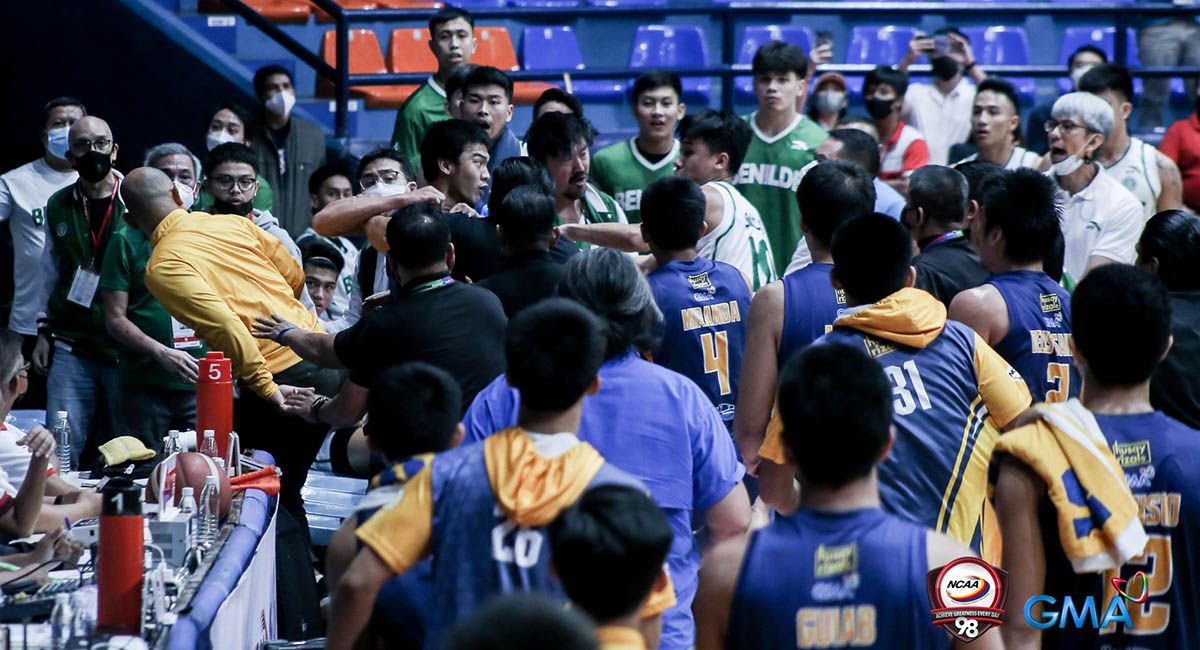 Second, he may also face disciplinary sanctions from the NCAA itself. As a student-athlete participating in the NCAA, Amores has placed himself within the disciplinary authority and the rules of the NCAA. One of these rules is to refrain from acts of violence and unsportsmanlike conduct.

Going on a blind rampage and throwing haymakers to unsuspecting players is as unsportsmanlike as it comes.

Whatever the decision of the NCAA, though, its enforcement will be limited to the NCAA. For example if the NCAA decides to impose a lifetime ban on Amores, Amores will only be banned from playing in the NCAA. Its decision does not legally extend to the UAAP, FilBasket, or the PBA, as these are completely separate entities. Amores can choose to play in those leagues, if these other associations allow him to do so. (Of course, that’s a big if.)

Civil and criminal sanctions that may await Amores

Third, he may face civil cases for monetary damages from the CSB players that he injured. Under Article 2176 of the Civil Code of the Philippines, whoever causes damage to another must pay for the damage done. This is called a tort. Torts cover both negligent acts (like your typical accident) or intentional torts. Amores’ rampage falls under intentional torts. Video footage clearly shows he intended to wallop whoever was in his way.

It actually reminds me of the 1955 American case Griggas v. Clauson, where a basketball player suddenly punched his opponent in an amateur basketball game. In the case, the US court ordered the basketball player to pay the injured party over $2,000 in damages. Converted to pesos, that’s a lot of money—and that was way back in 1955. If the CSB players choose to file a case, they have legal grounds to do so and may demand monetary damages from Amores.

Hence, what actual crime Amores can be charged with will depend on how long the medical treatment of the CSB players will last.

How these legal implications will pan out will be interesting to follow as it unfolds.

Mickey Ingles is the editor-in-chief of Batas Sportiva, practices sports law for ILC Law, and teaches Constitutional Law in the Ateneo Law School. He is also the author of Alinam, a young adult fantasy novel published by Summit Media.