ARIEL Vanguardia was on the fairway when the call came.

While he passionately plays golf, he’s glad to be back to his first love – basketball.

Vanguardia was named interim coach of a Blackwater team that is in the middle of the worst losing streak by a franchise in PBA history.

“Masunuring soldier lang tayo,” was his curt reply when asked about a comeback in the PBA, where he previously coached TnT and Phoenix. 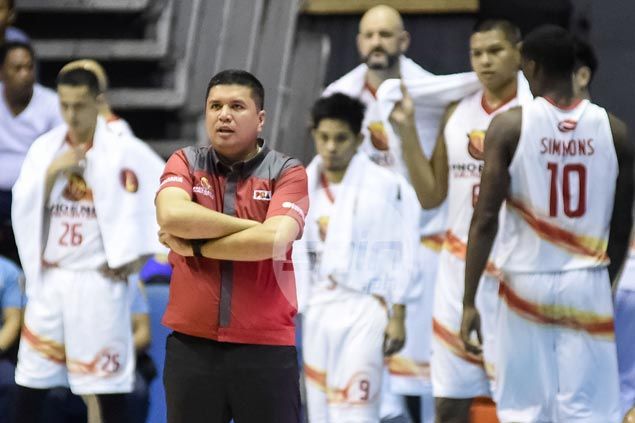 Vanguardia, who also previously coached Jose Rizal University in the NCAA, takes over from Nash Racela at the helm of a Bossing side that lost all 11 games in the PBA Philippine Cup.

Vanguardia, who serves as Blackwater alternate governor in the league board, was already being rumored of taking over the job from Nash Racela even before the Bossing ended their Philippine Cup campaign with a loss to Meralco last Saturday.

There were even talks that Vanguardia would be given the chance to get his feet wet in his coaching comeback by having him call the shots in Blackwater's remaining games in the all-Filipino conference.

But the complexity of the league's current health and safety protocols in the semi-bubble in Bacolor, Pampanga had management deferring the move and making the coaching changes instead, by the end of the team's campaign.

Team owner Dioceldo Sy later on confirmed to SPIN.ph all of the franchise's plans in the aftermath of a woeful record that dates back to its last eight games in last year's bubble in Clark, Pampanga.

"I'm super disappointed and frustrated," he said. "The team is a failure and not a reflection of my personality and the company."

Save for members of the coaching staff, Blackwater players already left for home early Sunday morning from the PBA bubble.

Racela has not returned calls made by SPIN.ph, although it was learned the entire coaching staff was taken aback by the decision as there were not a single word coming from management about an immediate coaching change.

Racela's contract with the Bossing is good until the end of the season.

The 48-year-old mentor, a product of De La Salle, last coached in the PBA in 2016-17 with the Phoenix Fuel Masters.

Prior to that, he was coach of the Malaysia Westports Dragons that won the ASEAN Basketball League (ABL) championship in 2016, and much earlier, as head coach of the Joser Rizal University Heavy Bombers who made the 2008 NCAA men's basketball finals.

He also had extensive experience serving as deputy coach of the Manila Metrostars in the Metropolitan Basketball Association (MBA), Talk 'N Text and Barako Bull in the PBA.