ONE of the most fabled ballclubs in the PBA is saying goodbye.

In a shock announcement, the Alaska organization said the ongoing Governors' Cup will be its last in a pro league where it distinguished itself as one of the most successful in a run spanning more than three decades.

During that memorable 35-year stretch beginning in 1986, the franchise owned by the Uytengsu family won 14 championships including only the fourth grand slam in PBA history with a team led by coached by Tim Cone.

With a heavy heart

"After more than three decades of basketball, 14 titles, and a grand slam, it is with a heavy heart that Alaska Milk Corporation (AMC) announces the retirement of its Alaska Aces team from the PBA," the team said in a statement.

No reason was given for the pullout, although the company hinted the decision was mainly done by Alaska' parent company, Royal FrieslandCampina, which bought a controlling stake from the Uytengsus in 2019.

Stunned fans expressed their dismay and sadness the minute the story broke on the looming departure of a proud franchise that stands as the second most successful in the pro league [tied with Purefods] after San Miguel's 27 championships.

The Aces also made 31 finals appearances, the last in 2018 when it lost to Magnolia, 4-2, in the Governors' Cup title series. The franchise's last championship came in 2013 with a team led by Calvin 'The Beast' Abueva and coached by Luigi Trillo.

The Aces continued on in the PBA after the sale to Royal FrieslandCampina under an agreement that Uytengsu, who stayed on as chairman, retained control of the operations of the team that was very dear to his heart.

"It was a really, really, really hard decision," said Uytengsu, his voice breaking in an online conference late Wednesday morning. He however added that, "I knew when I sold the company that this would happen."

“The Aces franchise will always be very special to me. I had the good fortune of starting this franchise at the age of 24 and learned so much about team dynamics and building championship teams from the players and coaching staff," Uytengsu added.

However, the company said it is pulling the plug on the PBA campaign in line with the global directive of Royal FrieslandCampina "to implement an organizational transformation that ensures long-term business sustainability."

“We thought long and hard before making this final decision. However, we believe that this will allow us to focus our resources on providing affordable nutrition for Filipino families,” said Uytengsu.

"We take great pride in our participation and success all these years and know we won with integrity. I also want to thank the PBA for our many years of partnership and wish the league continued success in the years to come."

Uytengsu said the company will try to sell the proud franchise or, if it failed to do that, all the players will be placed in a dispersal draft under PBA rules.

"Rest assured, we will ensure that each one of them will be taken care of as they transition into a new chapter in their careers," the company said. 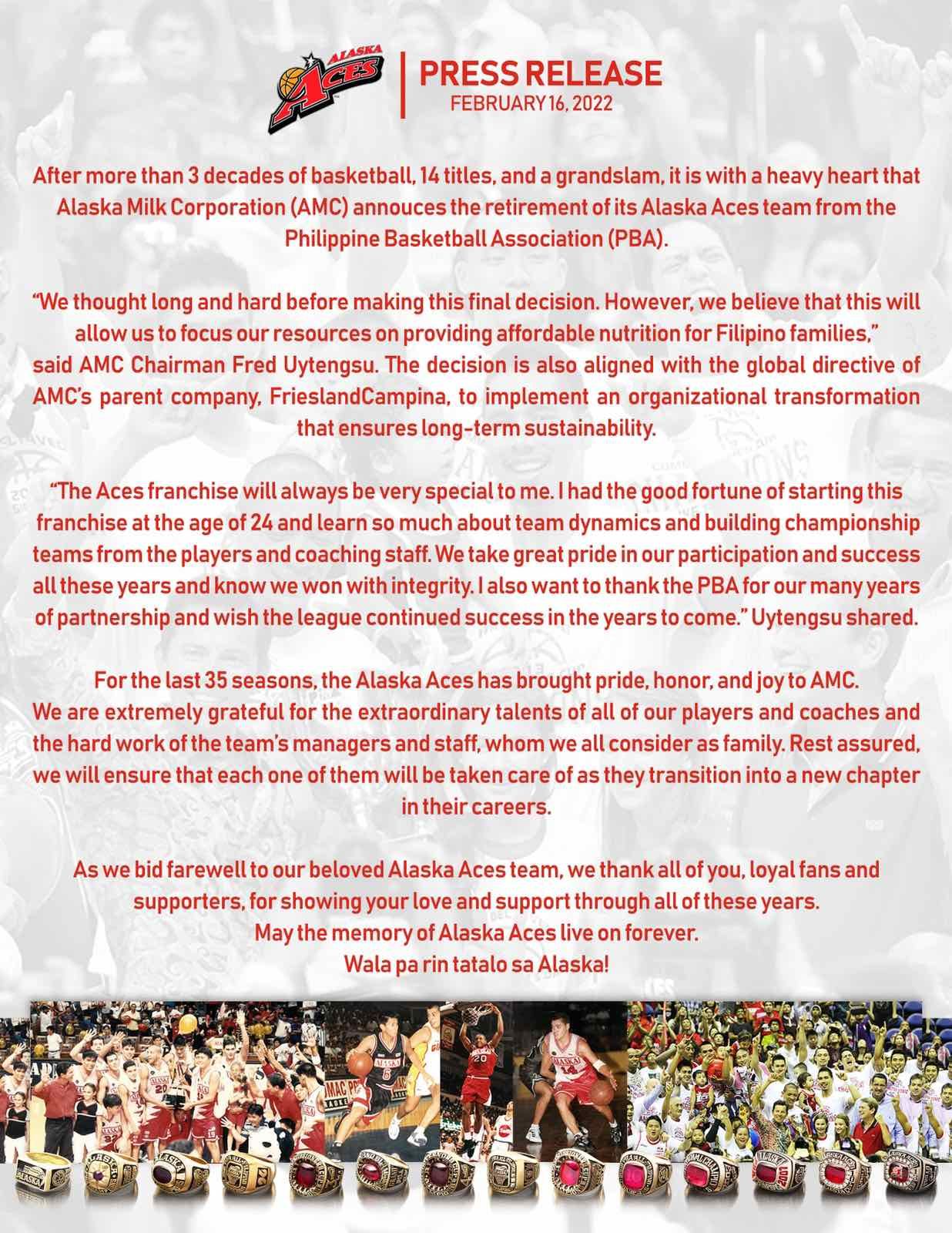