“THEY really do glow in the dark!”

This was everyone’s reaction during the Skechers Nite Run 2014 at Track 30th in Bonifacio Global City on Friday.

SPIN.ph was among the 100 participants invited to try out the innovative features of the Nite Owl GOrun3 running shoes during a 3K “smart and safe” night run around BGC. Also present were brand ambassadors, running aficionados, winners of a Facebook promo and members of the media.

The first thing you notice is how bright the shoes are. To make the Nite Owls work in low-light conditions, all you need to do is to expose the pair to sunlight (recommended) or artificial light. The three-layer Power-prene mesh uppers are treated with photoluminescent technology that produces an intense glow effect in low light or darkness. The more powerful the light source, the brighter the glow. The shoes were even brighter than the LED display of a digital watch.

In Metro Manila, runners usually train and tune up during daytime but due to hectic schedules and daily responsibilities, many opt to do early morning or evening runs in popular running venues like UP Diliman, Bonifacio High Street, Ayala Triangle, and Ultra.

While these venues provide ample trail for runners, safety is the major concern due to poor visibility on the roads especially at night and during the wee hours of the day which the Nite Owl is designed to address. 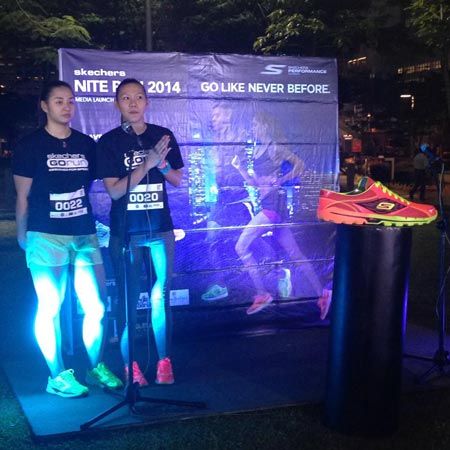 Another notable feature of the Nite Owl is the midfoot strike (M-Strike)- Skecher’s banner technology in their GOrun series. Inspired by barefoot running, the principles of minimalism encourages runners to run more naturally by positioning the body for a mid-foot strike in order to run faster, stronger, and longer. The GOrun 3 is lightweight, breathable (socks are recommended) and very flexible.

GOimpulse sensors on the outsole offer flexibility and feedback for a responsive running experience.

After the run, participants were treated to dinner and other giveaways courtesy of sponsors that included 100 Miles Café, Coffee Bean, Nestle and Unilab.

The Skechers Nite Owl 2.0 (SRP P4,795) is available in two colorways: hot pink and lime for ladies and green for men.