EVEN the tamest players lose their cool sometimes.

That's exactly the case in the Davao melee between La Salle and Far Eastern University in the 2017 Kadayawan Cup, which, it turned out, was sparked by Green Archers guard Kib Montalbo and Ken Tuffin of the Tamaraws.

That game, still fresh in the minds of those who follow the rivalry between the two schools, saw the Green Archers guard and the Tamaraws sniper bump each other on a fastbreak, sparking the free-for-all.

All hell broke loose from there, with players and even coaches getting involved in the ugly scene.

Ron Dennison, thrown out of the game minutes prior, came rushing back to the court and was caught throwing a punch.

Also joining win were FEU's Barkley Ebona and Axel Inigo, as well as La Salle's Brent Paraiso, Ricci Rivero and then-coach Aldin Ayo, who was seen grabbing Arvin Tolentino by the neck in the middle of the melee.

FEU was leading 73-59 with 20 seconds left in the third quarter when the organizers decided to scrap the match altogether.

UST, then under coach Boy Sablan, was eventually awarded the championship in the four-team pocket tournament.

Tensions from that game, however, escalated to the La Salle-FEU duels in UAAP Season 80. 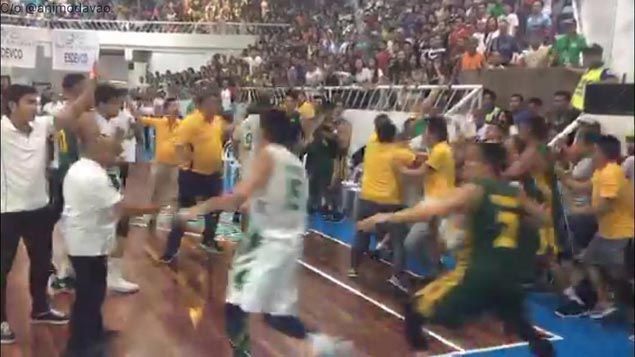 Up to this day, Andrei Caracut remains in disbelief how that incident started, given that he knows both Montalbo and Tuffin as mild-mannered.

As much as they would rather forget memories of that fateful day at the Almendras Gym, Montalbo said that they've all learned their lessons from that experience.