IN what could stir up interest from fans, a well-known dunker no taller than 5-foot-9 has expressed his desire to join the PBA slam dunk contest, promising to provide entertainment if given the chance.

The China-based Filipino dribbler wowed the crowd a few weeks ago with his dazzling aerial artistry during the final day of the NBTC National High School Championships at the Mall Of Asia Arena.

Carlos, 28, capped his show by jumping over two men, one on top of the other, for a perfect 50 score from judges Jerry Codinera, Danny Ildefonso, Kerby raymundo, Ben Mbala and Moustapha Arafat.

No wonder then that after the PBA released the names of the participants in the All-Star Slam Dunk contest, fans immediately tagged Carlos on Facebook in the hope that he will answer the challenge.

“I have been overwhelmed by hundreds of PBA fans who tagged me and broached the idea that I join the coming PBA Slam Dunk competition, atleast as a guest competitor,” sa Carlos in a taped message to the PBA sent to SPIN.ph.

“First things first, being a non-PBA player and draftee at that, I am not eligible. But with all humility, I would like to tell all of the fans who eagerly tagged me that I am willing to take the challenge,” he added.

Carlos, who have joined and won several slam dunk contests around the world, is keeping his fingers crossed that the PBA will open its door for him to join the event as ‘guest performer,' now that the league has tweaked the format of the annual showcase.

“I may not yet be in the level of those already named to the competition, but I am willing to show them that a nobody like me, can provide a fierce challenge - all for the glory of making the fans happy,” said Carlos, who claims to have a 41-inch vertical leap.

“I just hope that the PBA officials will give me a chance to become a humble part of their huge and well followed annual activity,” he said. “I don’t know if it’s possible, but again … I am up to the challenge of the fans who eagerly called my attention about the upcoming PBA All Star side event.”

Carlos also hinted that he is willing to shoulder the airfare should the PBA allow him to take part.

"I have no idea if the PBA will allow me but yes, I shall make myself available to participate in their All Star Dunk Contest. I am also willing to pay for my fare and other expenses should they allow me to compete,” he said.

“It will be an honor for me and something that will hopefully inspire me to further hone my basketball skills as I prepare for next year’s PBA draft,” added the

“I have no intentions of using the PBA to gain personal fame, I just wanted to help make the event more exciting in the simplest ways I can,” he said before going to practice with the China Slamdunk Basketball Camp, Asia’s future answer to the already establish Harlem Globetrotters of the US. 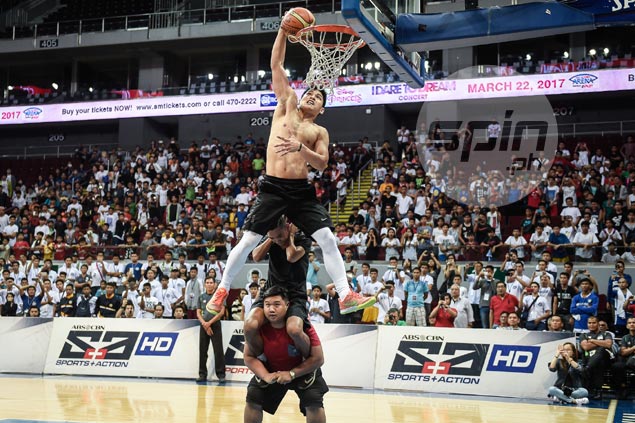 PBA legend Codinera, who was one of those amazed by the leaping ability of Carlos, hopes the PBA will allow Carlos to compete in the All Star side event.