Letran withstands Abando injury to deny Mapua in Game One

by spin.ph staff
2 days ago

FOR the first time this season, Letran found itself on the ropes. It’s a good thing the Knights have already proven that they can navigate their way out of it.

Trailing Mapua for almost the entirety of Game One and losing MVP frontrunner Rhenz Abando in the third quarter, the Knights still found a way to hack out a 68-63 win over Mapua in the NCAA Season 97 Finals on Sunday at the Filoil Flying V Center in San Juan.

The win moved the Knights a win away from a historic season sweep in the college league's first tournament in the pandemic.

[See Sigh of relief as Abando fracture ruled out]

However, the Intramuros-based side may have to wrap up a title repeat starting in Game Two without Abando, who hurt his ankle on the 3:20 mark of the third following another jaw dropping follow-up dunk.

Jeo Ambohot gave the Knights their first lead of the game on a floater with 45.3 seconds remaining, before his team got a big defensive stop on the other end resulting in free throws for Louie Sangalang.

Sangalang split the free throw on the next play for the Knights to increase the lead to two, 64-62, before Fran Yu won another possession by outhustling the Mapua bigs for the loose ball. 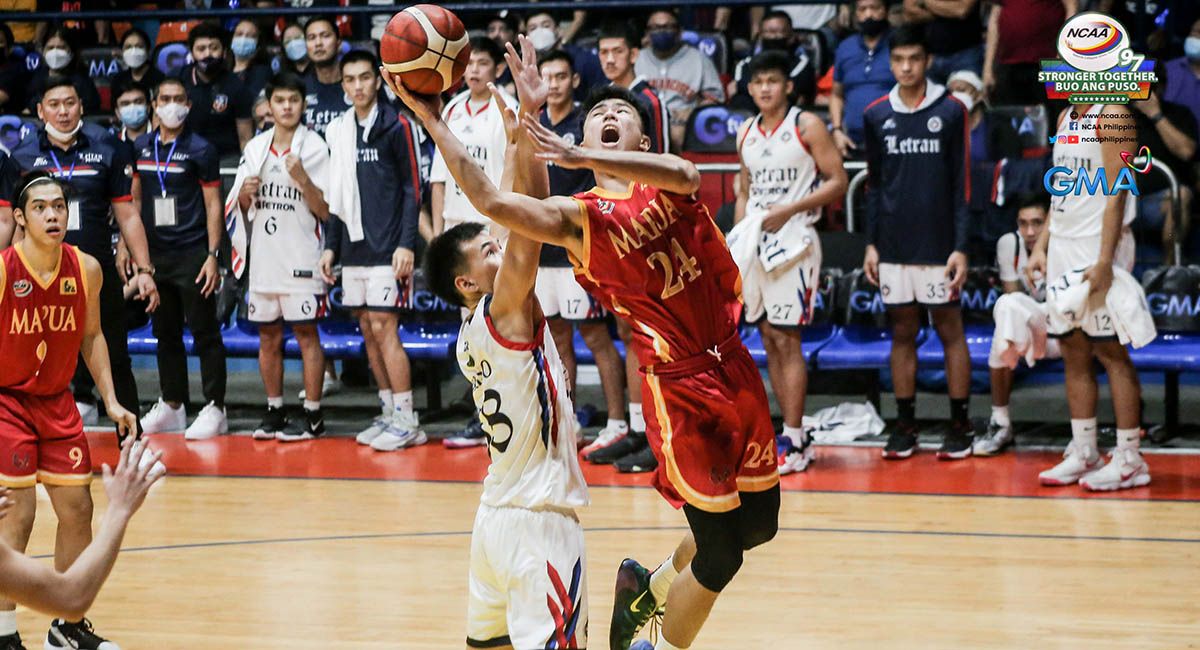 Yu, last season’s Finals MVP, then drove the final nail in the Cardinals’s coffin as he threaded a pass through traffic to a cutting Brent Paraiso to give the champions a comfortable 66-62 lead with 15.3 seconds remaining.

“In the end nasuklian kasi na-foul out yung bigs nila."

The Knights had to pull out all stops in the end game as they struggled form the field, making just 33 percent of their shots and missing all 15 shots from beyond the three point line.

Mapua capitalized on Letran’s paltry shooting, taking control of the game from the get-go and leading by as many as 10 points early in the first half before turning back every comeback attempt from the Knights.

The Cardinals looked good up until the final 3:18 of the game after Adrian Nocum drilled a huge three-pointer to put the Cardinals ahead, 62-58. That’s when the Knights amped up their defense and held their opponents without a field goal from that point on, ending the game with a 10-1 rally for the amazing comeback.

Paraiso led the way for the Knights with a solid all-around game of 14 points, five rebounds and five assists as Sangalang added 14 points, seven boards and two blocks.

Abando, for his part, was already making his presence felt before the injury as he bowed out with 13 points and seven boards.

Paolo Hernandez, whose hot shooting led the Cardinals early but was held scoreless in the second half to finish with eight points.