CHICAGO — Zach LaVine scored a season-high 30 points as the Chicago Bulls coasted to a 111-97 victory over the Toronto Raptors on Monday night (Tuesday, Manila time).

LaVine, who didn't play in Sunday's nine-point loss at Toronto because of injury management on his knee, scored the Bulls' first nine points of the fourth quarter before committing his fifth foul with seven minutes, 26 seconds left.

But the Bulls held a 15-point lead and were able to cruise the rest of the way.. They improved to 2-2 in four series of back-to-back games.

For the second time in as many nights, the Raptors double-teamed Bulls leading scorer DeMar DeRozan, who took only three shots in the first half and scored his first points on a three-point play with 2:43 left in the second quarter. DeRozan finished with nine points, equaling his season low.

But the Bulls relied effectively on their depth to shake off a slow start in which theycommitted five turnovers in the first five minutes.

Reserves Goran Dragic and Javonte Green scored 15 of the Bulls' 30 first-quarter points that enabled them to overcome a nine-point deficit. That compensated for the brief loss of LaVine, who committed two fouls slightly more than four minutes into the game.

Raptors swingman Scottie Barnes missed his first six shots but responded with a thundering dunk, and Gary Trent Jr. followed with a three-pointer that cut the Raptors' deficit to 56-53 with less than a minute left in the second quarter. 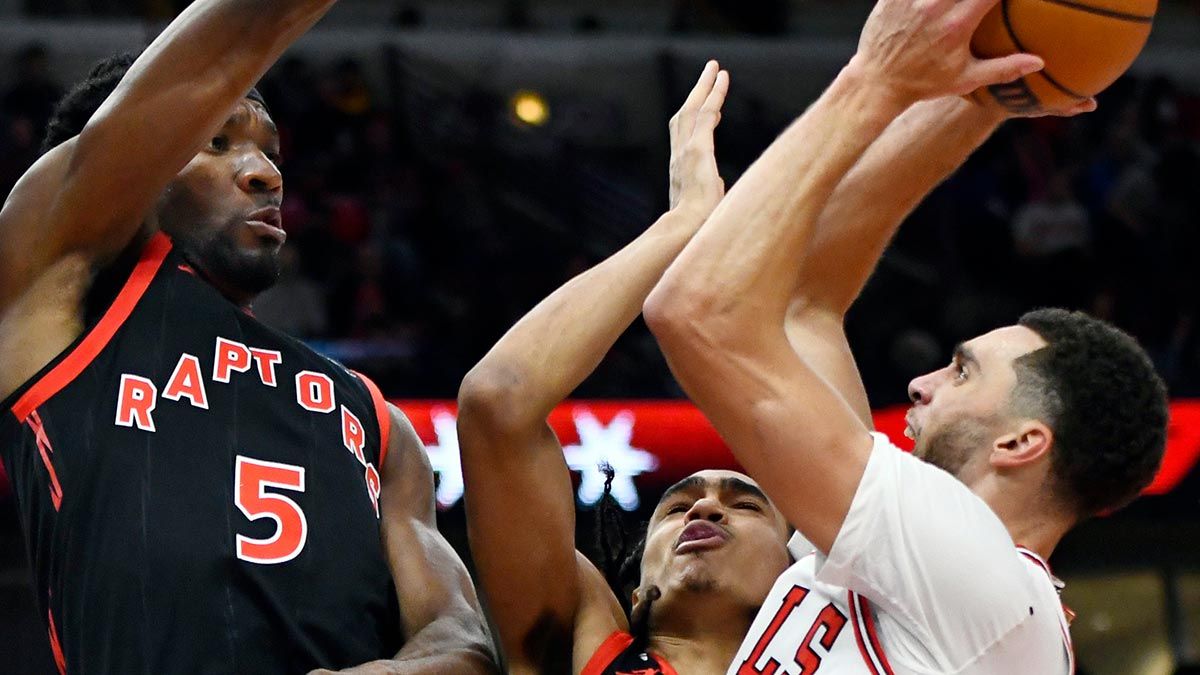 The Bulls will play one game in their next five days, allowing coach Billy Donovan to maximize their practice time that had been reduced to morning shooting sessions or rest following back-to-back games. "I think what we need more than anything else is, even for some of our younger guys that are playing like this, is a lot of attacking closeouts, reading the defense, how to drive it, how to space it and relocate.," Donovan said. "We need to work on more of those concepts."

Raptors coach Nick Nurse returned to Chicago for the first time since earning his Ph.D in Sports Leadership from Concordia University in nearby River Forest last May. "I put that so far in my rear view mirror now that it's done," joked Nurse, who did revisit that moment Monday with one of his professors.

Raptors: C Khem Birch (right knee) underwent an MRI, and Nurse said doctors are determining how the soreness can be managed in a quick manner for him to return. Birch missed his third consecutive game.

Bulls: C Andre Drummond (left shoulder) was ruled out prior to tipoff.. Doctors were concerned with his range of motion. ... G Coby White (left quad) has experienced reduced swelling, but he has been relegated to light basketball work and is not close to returning, Donovan said. ... G Ayo Dosunmu made a pregame plea for fans to participate Tuesday on Election Day.