RHENZ Abando’s early stint with Korean club Anyang KGC includes going up against the champion of the PBA Philippine Cup.

The East Asia Super League (EASL) on Wednesday released its full schedule for its inaugural home-and-away season and action kicks off with a doubleheader in Korea headlined by the match pitting Anyang and the winner of the all-Filipino Cup.

Abando, a member of Gilas Pilipinas and NCAA Rookie-MVP in Season 97, is skipping his final year with Letran, signing a contract with Anyang in the Korean Basketball League (KBL).

Now he gets to play as a pro against the Philippine Cup champions when the Asian regional league fires off on Oct. 12. The Philippine Cup is now down to the last four featuring San Miguel, TNT, Meralco and Magnolia.

In Manila, the runner-up of the Philippine Cup hosts former NBA player Andrew Nicholson and the Bay Area Dragons

The semifinals of the PBA’s season-opening conference start on Wednesday in a pair of best-of-seven series pitting the top seed Beermen against the highly-motivated Bolts, and the defending champion Tropang Giga against the third seeded Hotshots in a rematch of last year’s finals.

The two teams that advance to the best-of-seven title series will represent Asia’s pioneering pro league to the EASL.

The eight teams representing ballclubs from the major leagues around the Asian region has been divided into two groups of four each. 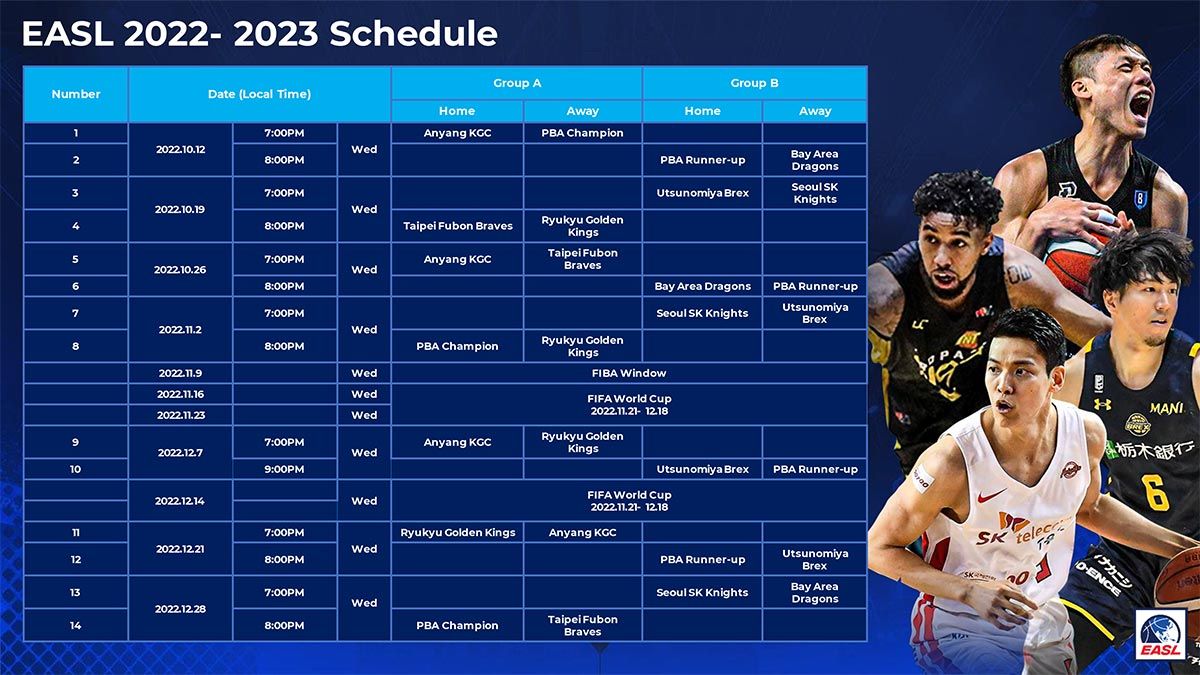 In Group A Are Anyang, Braves, Kings, and the PBA champion, while in Group B are the Knights, Brex, Dragons, and PBA runner-up.

The other half of the eight-team field make their respective debuts on Oct. 19 as reigning P. LEAGUE+ champion Taipei Fubon Braves meet B.LEAGUE runner-up Ryukyu Golden Kings at home, while it’s a clash of champions between B. LEAGUE’s Utsunomiya Brex against KBL’s Seoul SK Knights in Japan.

Capping the action in October is the game between Anyang and Braves in Korea, and the PBA runner up team against the Dragons in Manila on the 26th.

Only two games will be held in November to give way to the FIBA World Cup qualifier window, and it features the Knights going up against Brex in Korea, and the PBA champion hosting the Kings on Nov. 2. 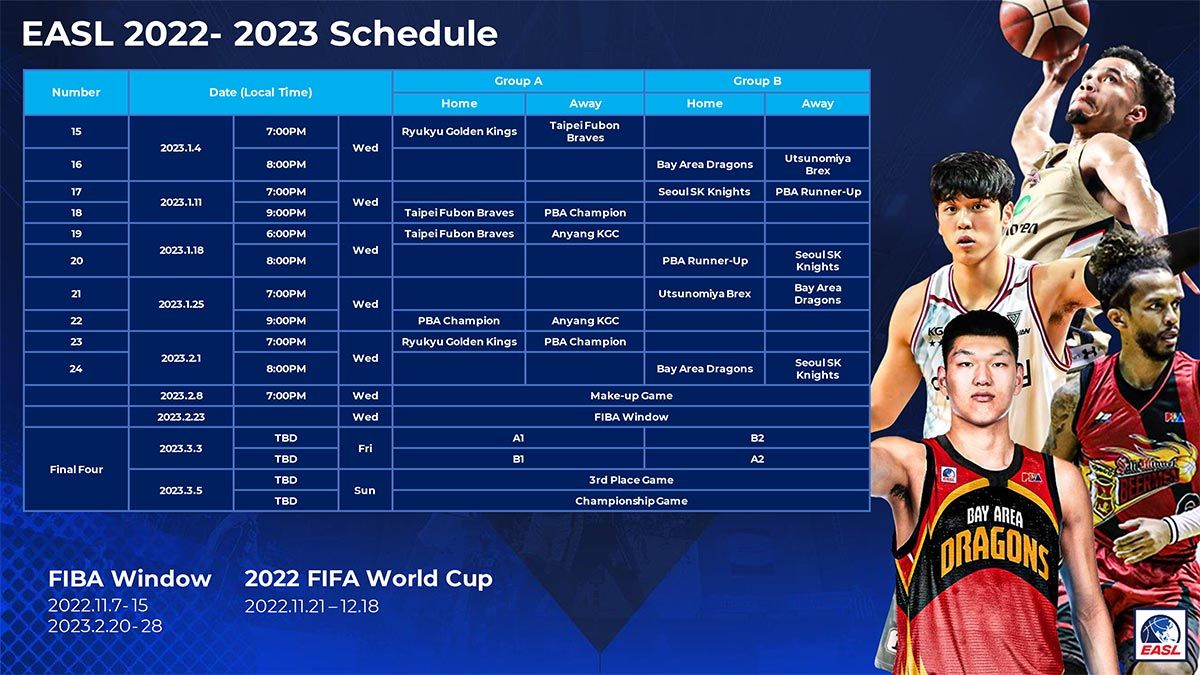 In December, the PBA runner up plays two games against Brex on the road on Dec. 7, and then takes the same Japan-based team at home on the 21st.

The PH Cup champ meanwhile, clash with Jet Chang and the Braves on the Dec. 28 in Manila in what would be a return trip for the P. LEAGUE+ MVP, who once suited up for the KIA franchise as Asian import in 2015.

The rest of the Filipinos’ schedule will have the PH Cup runner up travelling to Korea to face the Knights on Jan. 11 and the champion going to Taipei and battle the Braves on the same day, the runner up goes up against the Knights in Manila on the 18th, while the champion team hosts Anyang on the 25th and then goes to Japan on Feb. 1 to meet the Kings.

Top two teams in each group advance to the crossover on March 3, with the two teams to survive playing for the $1 million final on March 5.