EJ Obiena is set to lose his status as a Philippine national athlete.

An investigative body formed by the Philippine Athletics Track and Field Association (PATAFA) has recommended that the Olympic pole vaulter be expelled from the national team in the latest twist to an ugly mess between the warring parties.

Aside from Obiena's expulsion, the Patafa body recommended the filing of a criminal complaint against Obiena over EUR 6,000 (PHP 360,000) representing the salary of the athlete's coach which it claimed was not turned over.

"Now he has to face the consequences," said Patafa president Popoy Juico at the end of an online press conference that was also carried on Facebook Live.

The Patafa said it is also taking action against coach Vitaly Petrov, who the national federation claimed started all the ruckus by complaining about unpaid salaries - "and turning us into collecting agents," said Juicio - and later retracting his complaint when he was paid, belatedly, by the Obiena camp. 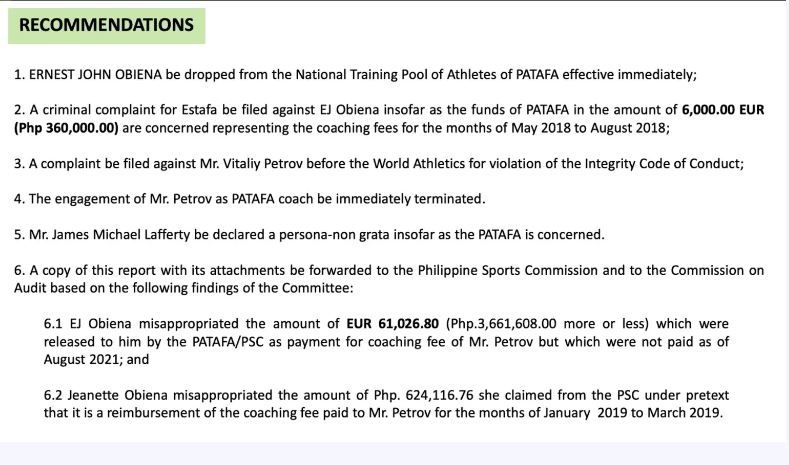 The Patafa investigative committee has also recommended the filing of a complaint against the legendary Ukranian coach before the World Athletics for what it claimed was a 'violation of the Integrity Code of Conduct.'

His services as a Patafa coach should also be terminated immediately, the Patafa body said.

Aside from that, Patafa also wants Obiena's longtime adviser James Michael Lafferty be declared a persona non grata by the federation.

Obiena, 26, rose from the ranks to become the world's No. 6 ranked pole vaulter and earn a place in the 2020 Tokyo Olympics, where he finished 11th. He also set a new Asian record of 5.93 meters last September - an effort that was ranked No. 3 by World Athletics last year.

However, he fell foul of his own association when the Patafa claimed funds channeled through Obiena that were meant for Vitaliy Petrov didn't reach the famed coach, as claimed by Ukrainian legend and now athletics official Sergey Bubka.

When news of the Patafa internal probe into the matter leaked, it sparked a back-and-forth war of words that has raged to this day.

As an offshoot, the Philippine Olympic Committee, the highest sports body in the country, declared Juico a persona non-grata last week, saying the longtime Patafa chief 'maligned' Obiena with the accusations,

The Patafa administrative committee said it is also set to submit a copy of its report to the Philippine Sports Commission (PSC) and to the Commission on Audit (CoA).

The report also cited Obiena's mother Jeanette, who the federation accused of "misappropriating the amount of P624,116.76 she claimed from PSC under the pretext that it is a reimbursement of the coaching fee paid to Mr. Petrov for the months of January 2019 to March 2019."

Jeanette Obiena is part of the Patafa staff.