Carrying the hopes of an entire nation starved for Olympic glory on her shoulders, Hidilyn Diaz delivered a weightlifting silver medal from the Rio Games to become the Philippines' biggest sports hero of the year. Diaz is SPIN.ph's Sportsman of the Year for 2016, and this is her inspiring story

Well, some of us stayed up late, tired eyes fixed on the television set in the hope of witnessing history unfold, while those who were sound asleep woke up to a joyous celebration not seen since the epic fights of Manny Pacquiao during his peak years.

Thousands of miles away, Hidilyn Diaz bravely carried the weight of expectations of a nation starved for Olympic glory and ended the Philippines' 20-year medal drought by winning a silver medal in weightlifting in the Rio de Janeiro Games.

A star was born.

Soon after landing in Manila, Diaz was whisked off to Davao City where she was met by President Rodrigo Duterte, who promised P2 million as incentive. That was on top of the P5 million reward for an Olympic silver medalist under the government's Athletes Incentives Act.

But more than the financial windfall, the shy weightlifter from far Zamboanga became the unlikely face of the Filipino athlete - a defiant symbol that anyone can rise above the quagmire of corruption and politics in Philippine sports and stand proud at the highest levels.

Not bad for an athlete who was bullied as a kid and had to break free from the shackles of a deeply rooted tradition that women belong at home - and certainly shouldn't be doing some heavy lifting - so she can win her first weightlifting gold in the Batang Pinoy, but only because she was the only competitor.

This is Hidilyn Diaz, SPIN.ph's Sportsman of the Year for 2016. And this is her story. 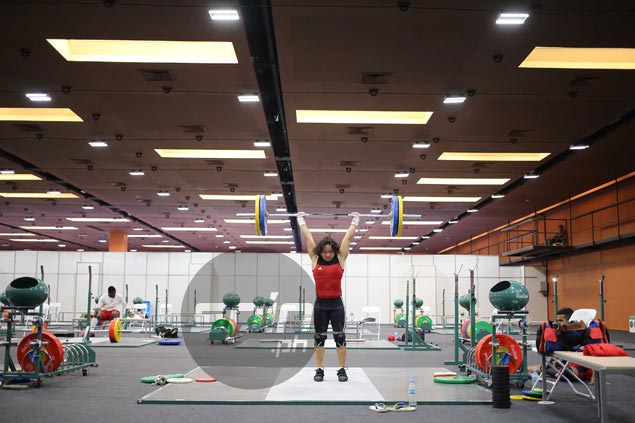 Lifting came naturally for Diaz who, belonging to a family of eight residing in Barangay Mampang in Zamboanga City where running water wasn't available, was constantly given the errand of getting pale loads of water from a deep well pump nearby.

It was also easy for Diaz to get interested in weightlifting. Her cousins were already into it, and the then 11-year-old Diaz tried out the sport more out of curiosity - and partly to get her mind off neighborhood boys who she said kept picking on her.

However, it wasn't easy to get her mother's approval.

As it was, life wasn't easy for the Diaz brood. Her father was a farmer who later drove a tricycle to provide better for the family. On the side, he brought home fish and vegetable which a young Hidilyn peddled in the market.

But Hidilyn's life changed when she was spotted by a former weightlifter named Elbert Atilano, who almost instantly saw potential in this stocky girl who showed the correct technique the first time he saw her lift a heavy barbell over her head.

Diaz remembered her first encounter with Atilano as if it was yesterday.

Years later, when Diaz made her Olympic debut at the tender age of 17 as a wild card entry in the 2008 Beijing Games, everyone was surprised - except Atilano.

For the coach, Diaz merely fulfilled her destiny. 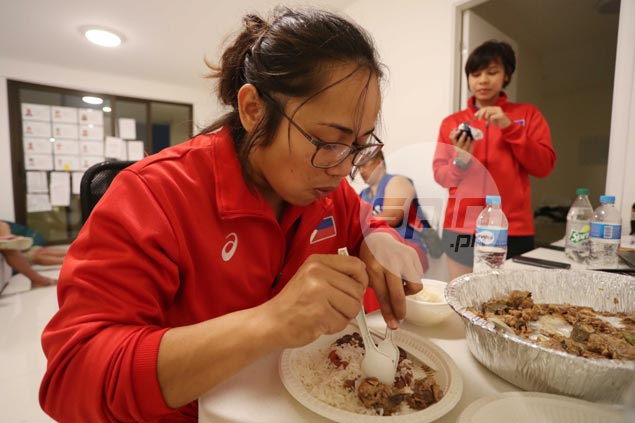 She got hooked to weightlifting before she could reach puberty, but Diaz never imagined this hobby would take her as far as the Olympics. In fact, she had no idea at that time what the Olympics was all about.

Diaz also fondly remembered her first-ever competition in weightlifting back the 2002 Batang Pinoy in Puerto Princesa. She won the gold not because of pure talent, but for the sheer lack of participants.

Hallow as the victory may be, it served as the launch pad for a blossoming career. Just two years later, Diaz was good enough to be part of the national team pool. Then she got called up for the Asian Youth Championship, where she finished just a few places out of the podium.

By the time she competed in her second Olympics, much was already expected from Diaz - and with good reason. While she merely got a ‘free pass’ to the Beijing Games, Diaz qualified on her merits for the 2012 Olympiad in London.

But unknown to many, Diaz was fighting a bigger battle from within. She had lost the fire to compete, and had lost her sense of purpose. It didn't help that she qualified for the London Olympics just two months before the actual competition. Emotionally and physically, she wasn't ready.

After going bust in London, things went downhill for Diaz that it drove her to the throes of quitting. Injuries took a toll on her performances, so much so that he failed to get a spot in the team to the 2014 Asian Games. Worse, her longtime coach Antonio Agustin also became collateral damage.

But like all great athletes before her, Diaz soon found a way to overcome adversity. The inspiration came from an unlikely source when she was stumbled on one of the weekly prayer gatherings of popular preacher Bo Sanchez.

Along the way, it suddenly hit her. 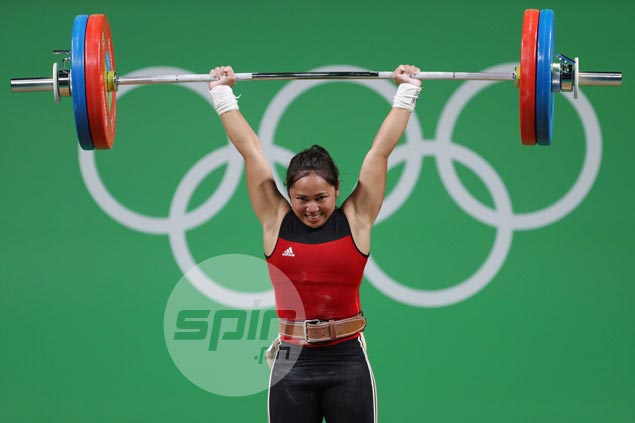 By 2015, Diaz, rejuvenated and motivated, captured a bronze medal in the World Championship in Houston, Texas by lifting a total of 213 kilograms - good enough to earn her a ticket to a third Olympic appearance in Rio de Janeiro.

At that time, she already knew that an Olympic medal was within reach. But there was just one problem: a shoulder injury.

That injury persisted until the days leading to the Rio Olympics, but there was no turning back.

At the Riocentro Pavilion 2 where the weightlifting competition was held, Diaz was still bothered by the injury as she struggled in the snatch, lifting only 88 kilograms - a good 12 kgs. behind pace-setter Hsu Shu-ching of Chinese Taipei.

Just like the two previous Olympics, the 25-year old was once again seeing her chance fade away. But she didn't lose hope, only because her favorite clean and jerk event was still to come.

True enough, she fared better in the clean and jerk. She lifted 112 kgs. to end up with a total of 200 kgs. and surpass the 199 of Korea’s Yoon Jin Hee, assuring herself of a podium finish.

Diaz already had a wide smile on her face knowing she had won a medal, but more good news came her way. Heavy favorite Li Yajun failed in all her attempts in the clean and jerk. Within minutes, Diaz' guaranteed bronze had turned into silver - the first by a Filipina, and the country's first outside boxing. 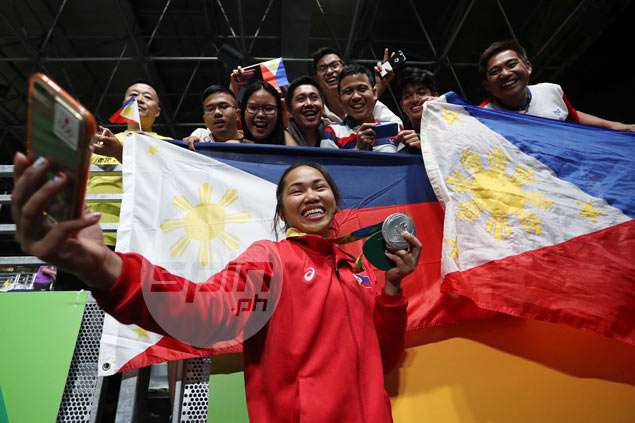 In between smiles and poses during a recent photo shoot at the rundown weightlifting gym inside the Rizal Memorial Sports Complex, Diaz supervised a training session for an aspiring weightlifter, giving instructions in the Chavacano dialect to better connect with the girl.

That SPIN.ph photo shoot wasn’t the first for Diaz since her Rio feat, and it definitely won’t be her last. She has landed endorsement deals left and right and continues to be showered with incentives by a grateful nation, including a house and lot in Clark that was a gift from one sponsor.

Another incentive has allowed Diaz to pursue her dream of going back to school while the first thing she spent for from her winnings was a tour for her parents.

Her life may have completely changed, but Diaz assured she won't be going as far as to follow the career path of Olympic heroes before him like 1996 Atlanta Olympics silver madalist, Mansueto 'Onyok' Velasco, saying showbusiness is simply not her cup of tea.

What she wants to do is to give back to a sport that has brought her fame and fortune she never even imagined.

But a bigger goal is to deal with some unfinished business. She has brought back former coach Agustin to her team and resumed her training just months after her Rio success, her sights firmly fixed on winning the country's first-ever Olympic gold medal three years from now in Tokyo.