HIDILYN Diaz received a good number of accolades after winning a historic silver medal in the Rio Olympics, but the gift she received from a fan last Thursday was something different.

The Olympic heroine met Rowel Panizares, a 42-year old artist who reached out to the weightlifter via her Facebook account and told her he wanted to present her with a gift for her great accomplishment in Brazil.

Last week, Panizares finally had the chance to present Diaz with her own customized vinyl figure.

A meetup was arranged at a lobby in a Bonifacio Global City hotel where Rowel was given a chance to present the item personally. He was understandably thrilled over the experience.

The customized vinyl Funko Pop figure took a week to make in Diaz’ likeness. The details were accurate, down to the Olympian’s uniform and the Olympic logo on the weights on the barbells.

Diaz was so happy wth her gift that she even autographed the figure she was supposed to receive. In fact, the caricature of the figure Panizares made is now Diaz’ profile picture on Facebook.

As a gesture of her appreciation, Diaz autographed a poster and another figure Panizares made for his own collection.

Many Funko collectors actually asked if Panizares would sell the figure, but he explained it was meant for the Pinay weightlifter who also commissioned him to make more figures of her which she would give as tokens of appreciation to the people who supported her.

She also asked to be made a poster which she plans to hang in her new house in Clark, Pampanga, part of the incentives she won for her Rio achievement. 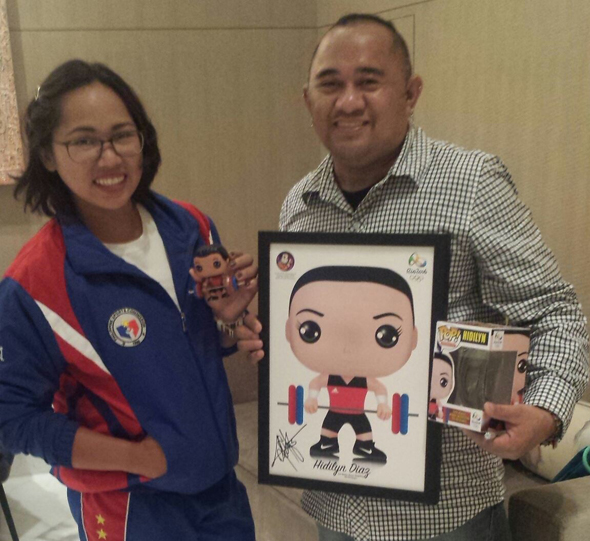