NOTHING comes close to the dominance La Salle has had in recent years when it comes to women's volleyball.

Winning six titles in the past decade, the Lady Spikers of coach Ramil de Jesus have been fixtures in the Final Four, owning the longest active streak with 11 straight appearances.

Nobody knows how La Salle's campaign this UAAP Season 82 would have transpired as the tourney has been scrapped altogether because of the global COVID-19 pandemic.

The last time the Lady Spikers failed to make it in the postseason, it was controversial, to say the least.

It was UAAP Season 70 in 2008 and La Salle was in the running for a coveted semifinal slot.

Sitting with a 6-7 card, La Salle was in a neck-to-neck race with the 7-6 Ateneo for the last playoff seat behind leaders Adamson, defending champion University of Santo Tomas, and past season's runner-up Far Eastern University.

Bear in mind that this was the Taft side's first season back after serving a suspension a year prior stemming from the eligibility scandal the men's basketball team found itself in.

It turns out, La Salle just couldn't get rid of that stench that easily.

An "honest mistake" on the part of the Lady Spikers forced them to drop their run altogether as Jacq Alarca's situation led to the team forfeiting seven of their games and all their wins in the second round.

Alarca, who was the team's leading scorer, filed a leave of absence in the middle of the season yet continued to compete for La Salle.

"She decided to go on LOA thinking that she’s already eligible because the tournament has started," said Bro. Bernie Oca, La Salle’s then-representative to the UAAP Board as quoted in a report from the Philippine Daily Inquirer.

"It was an oversight on our part. The rule says the player has to be a student until the end of the tournament."

According to the UAAP rules, a player must be student of his/her school until the end of the tournament.

University of the East's Rolando "Brenn" Perez, the head of the UAAP eligibility committee, dropped the hammer and ruled to forfeit all of their wins where Alarca played starting on Jan. 15, 2008, the date when La Salle okayed Alarca's leave of absence.

"La Salle’s wins have been forfeited only after Jan. 15 wherein her LOA was approved by her university and only the games where she played," he said in a separate report from People's Journal. 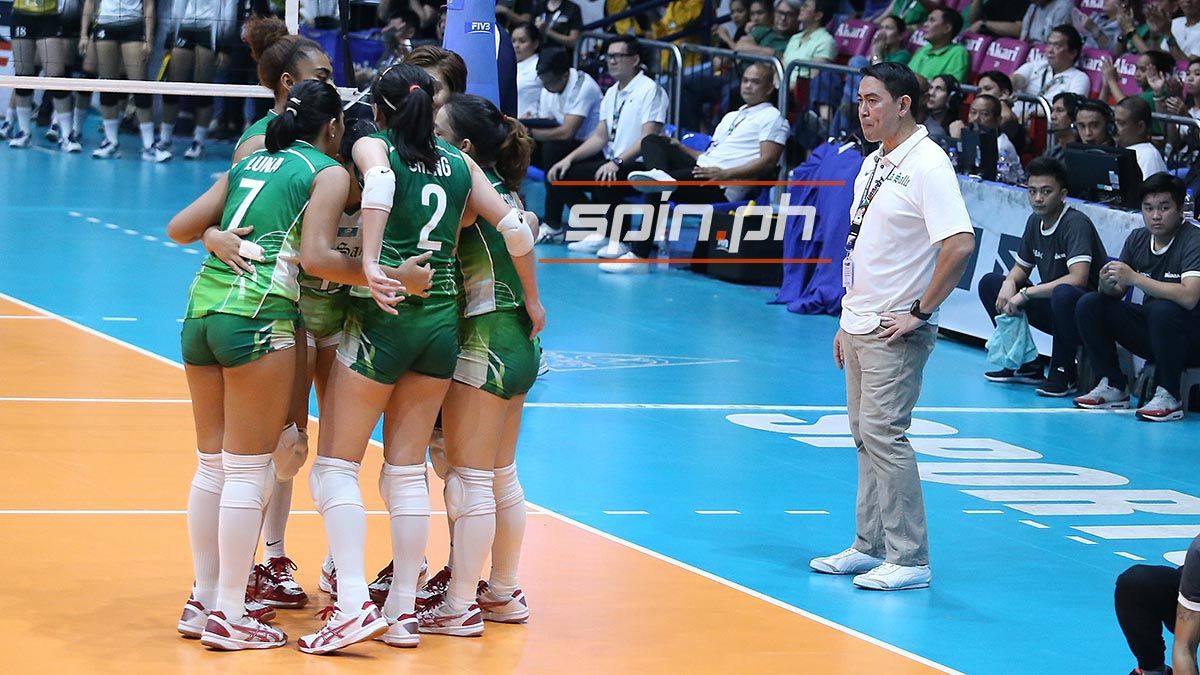 The Lady Spikers went 4-3 in that stretch, winning matches over National University to end the first round, and second round victories over cellar-dwellers University of the Philippines and University of the East. Most painful of which was the crucial four-set win La Salle had over Ateneo on Jan. 30.

Oca further elaborated that the gaffe was brought upon by La Salle adhering to a three-term academic calendar, compared to the two-semester calendar used by majority of the member-schools in the UAAP.

"It was an honest mistake," he said. "[Alarca] passed the eligibility in the second term and enrolled in the third term. The problem was most of the women’s games during the third term were on Thursday [and it conflicted with her class schedule] so she decided to go on leave."

With the 5-foot-9 scorer being ruled ineligible, the Lady Spikers saw their record drop to 2-11.

La Salle won its final asssignment against NU, but bowed out with a 3-11 record, taking home a lot of questions on how the season would have turned out.

Had La Salle not get its games forfeited, it would have wound up tied with Ateneo at fourth place as the Lady Eagles fell to the Lady Tamaraws in their last elimination assignment. Both would have sported identical 7-7 win-loss cards.

That would have set up a fourth-place playoff between the two teams, with the winner facing Adamson, which won in its own first-seed playoff over FEU and UST.

Instead, Ateneo benefitted from the ruling and got a free pass to the Final Four, the Lady Eagles' first semifinal berth.

Bitter of a pill was it to take, La Salle rolled with the punches and came back with a vengeance a year later, capturing the UAAP Season 71 crown behind Season MVP Manilla Santos, where Alarca was named as the Best Blocker.

The 5-foot-9 hitter was also hailed as the Season MVP in UAAP Season 73, on top of her Best Attacker and Best Server awards in her final year as the Lady Spikers reclaimed the championship. That triumph kickstarted their three-peat from 2011 to 2013.

As for La Salle, it never missed the Final Four since.