EJ Laure, other UST rookies show glimpse of what they can do for Tigresses

UNIVERSITY of Santo Tomas got the needed numbers from young EJ Laure and other rookies showed they can also deliver as the Tigresses got off to a hot start in the volleyball tournament of UAAP Season 77 on Saturday at MOA Arena.

Veterans Pam Lastimosa, Ria Meneses and Jessey de Leon combined for 24 points, but first year players led by Laure grabbed their share of the limelight in the opening-day win over University of the East.

Although coach Odjie Mamon downplayed the quick win as it was scored against a struggling UE side, the match gave a glimpse of what the young Tigresses’ can do.

“They don’t want to give it up sa mga veterans and because of that they earned their spot sa line up. They are competitive,” he added.

Cheering at the stands star rookie EJ Laure was her family headed by her father, PBA player Eddie Laure.

Although EJ’s performance in her UAAP women's team debut was a far cry from her matches in the V-League where she emerged as the team’s leading scorer, the elder Laure was proud. 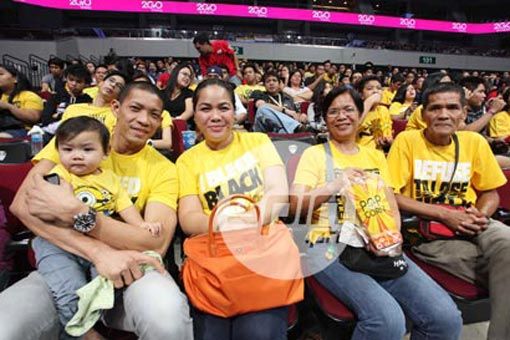