HALFWAY through the UAAP Season 80 women's volleyball tournament, and the early favorites, underdogs and dark horse teams have already emerged.

While some teams lived up to expectations, there are also others that have been disappointing so far this season.

Here’s SPIN.ph’s list of contenders and pretenders after the first round of eliminations. 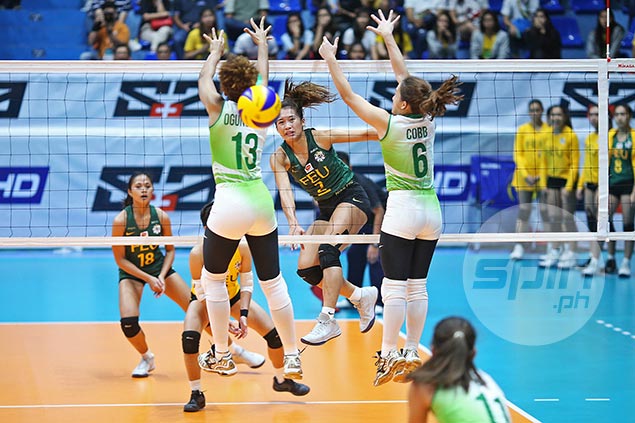 FEU had a rough start in the season having three consecutive five-setter matches - against title contenders Ateneo, Adamson and La Salle - for a 1-2 win-loss card early on.

But the Lady Tamaraws got their groove when they faced University of the Philippines, which they defeated in straight sets.

From then on, the Morayta-based squad sustained its momentum to end the first round with four consecutive victories. 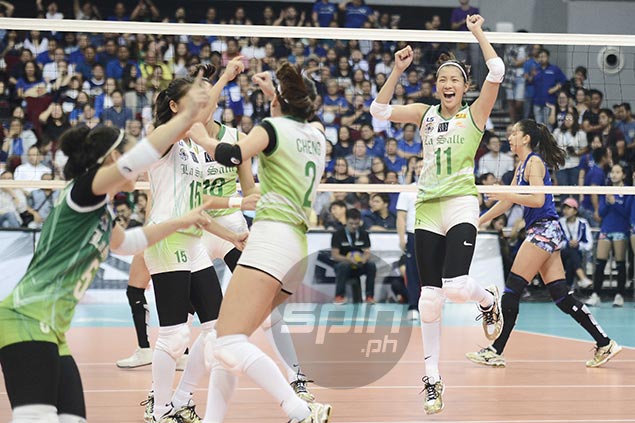 A winner’s character is measured by how they can get back up after a tough loss.

In the case of treble-seeking La Salle, it took two heartbreaking losses before it showed the heart of a champion.

After three straight wins, the Lady Spikers came crashing back to earth when they lost two of their next three games - a painful five-set defeat to National University and a four-set loss to Adamson within a week. 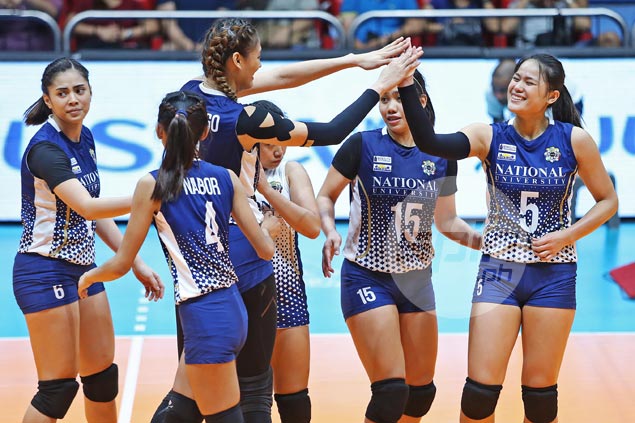 Early favorite NU lived up to expectations, finishing the first round with a 6-1 win-loss record to take the No. 1 spot.

But before the end of the first round, FEU stunned erstwhile undefeated NU.

Lady Bulldogs team captain Jaja Santiago was the first to admit that it was a wake-up call for the them and urged the players to bounce back strong.

Her teammates responded on Santiago’s call as they only needed three sets to defeat UP to end the first round on a high note. 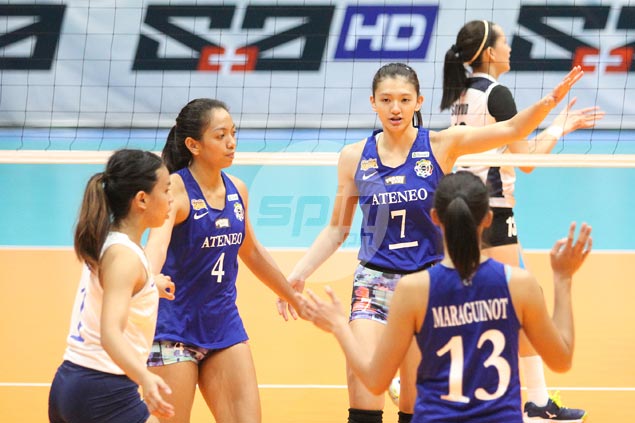 Ateneo is proving doubters wrong as it ended the first round with a 4-3-2 win-loss card at the No. 4 spot.

After a turbulent offseason, the Lady Eagles started the season with back-to-back losses but they recovered with five straight wins.

Ateneo, however, lost to rival La Salle at the end of the first round. 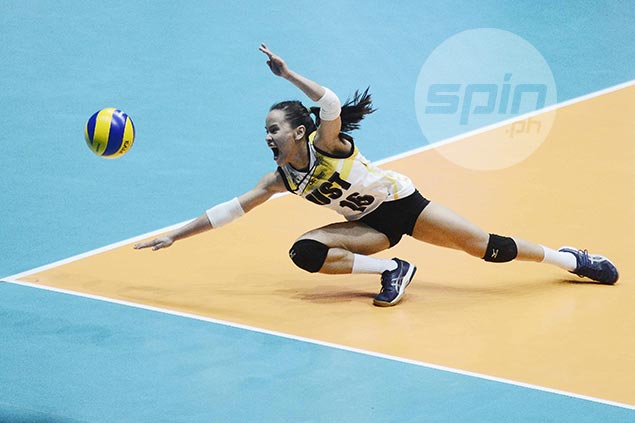 UST seemed to be just doing fine after it received a big blow when top hitter EJ Laure suffered a shoulder injury during the offseason.

The Tigresses leaned on Sisi Rondina as they pushed La Salle to the limits, dragging the back-to-back defending champion in five sets in the season opener and even pulling off a straight-set victory over Adamson.

Rondina, however, could only do so much.

After a 2-2 start, the España-based squad came crashing down with injuries as Fil-Italian rookie Milena Alessandrini suffered a shoulder injury and libero RJ Rivera injured her knee.

UST ended the first round with three consecutive losses tied with UP at the the sixth spot with a 2-5 win-loss record. 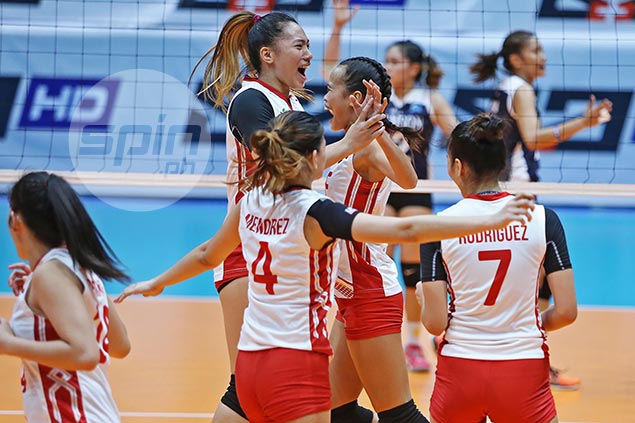 Heading into the season, former UE coach Francis Vicente was full of hope for UE.

But the veteran mentor’s dreams crashed before his very eyes as the Lady Warriors went on a five-game losing slump.

UE, at least, enters the second round on a high.

University of the Philippines 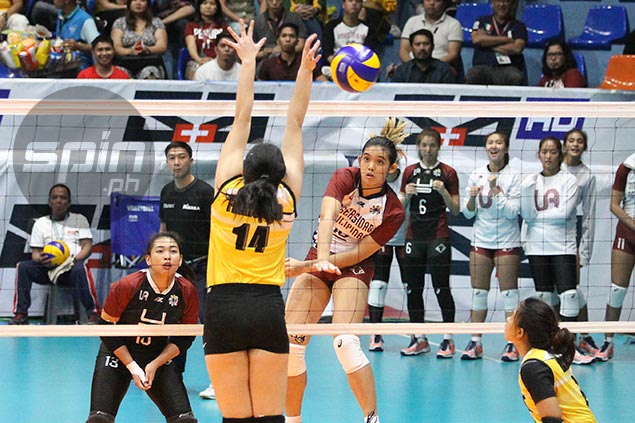 UP started the season with a five-set win over UE but four straight losses followed before the Lady Maroons bounced back at the expense of UST.

Still, UP ended the first round with a loss as NU, which came from a four-set defeat to FEU, vented its ire on the Lady Maroons. 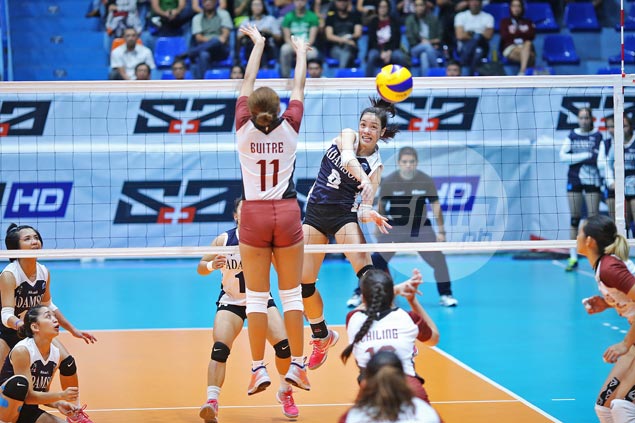 Early favorite Adamson couldn’t find some consistency in the first round.

Although the Lady Falcons scored a major upset over back-to-back champion La Salle, they also lost to cellar dweller UE to end the first round.

Even Adamson coach Air Padda said that their loss to UE was ‘really embarrassing’.