SISTERS Jaja Santiago and Dindin Santiago-Manabat finally stopped Foton’s three-game skid with a pivotal 25-15, 29-27, 25-14 victory over the winless Marinerang Pilipina to boost its chance for the third spot in the Philippine Superliga All-Filipino Conference on Tuesdat at the Malolos Sports and Convention Center.

After their valiant efforts were wasted for the past three matches that resulted a string of defeats, the towering Santiago sisters made sure to end the preliminary round on a high note, finishing with 16 points apiece, sending the Lady Skippers into a winless prelims campaign.

Dindin delivered 13 kills, two aces and a block, while her younger sister, Jaja nailed 14 kills and a pair of blocks. 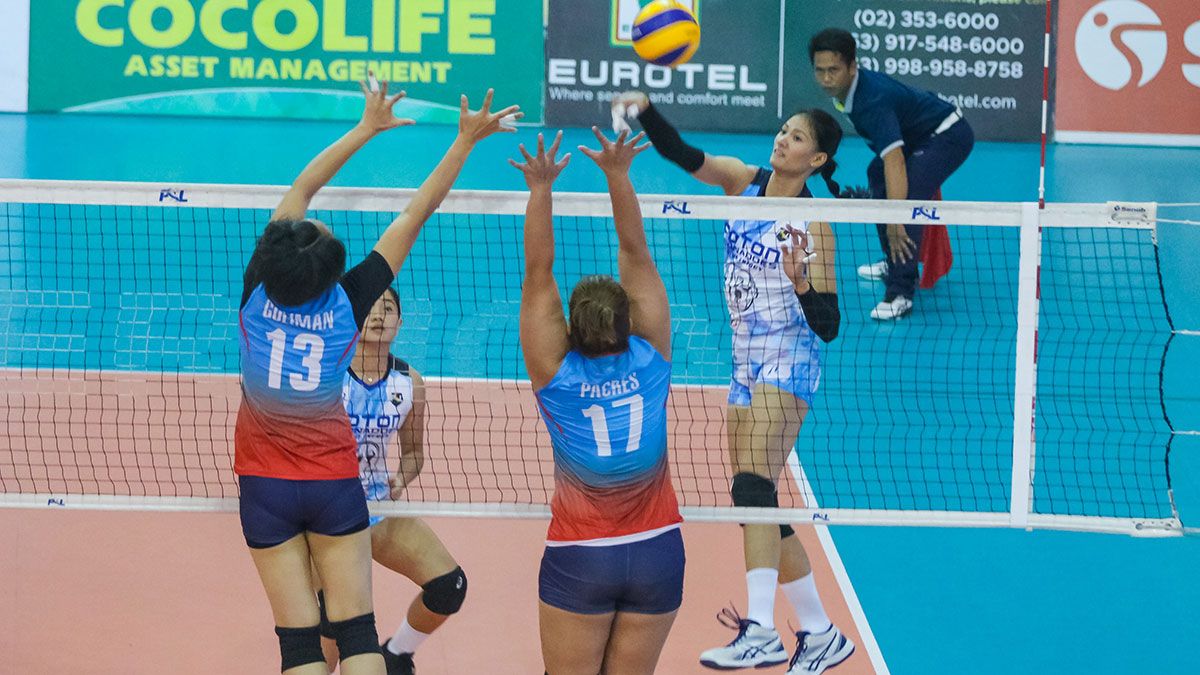 Dindin Santiago-Manabat goes for a kill over Nica Guliman and Dimdim Pacres.

Wing spikers Mina Aganon and Elaine Kasilag also instrumental with nine and eight points, respectively, as well as setter Gyselle Sy, who had 20 excellent sets on top of five markers.

Eya Laure, who replaced injured Maika Ortiz, played sparingly on her PSL debut finishing with two markers as Foton coach Aaron Velez opted not to force her game as she is still adjusting to the team’s system.

Foton finished the elimination round with an 8-6 win-loss record tied with idle Generika-Ayala but the Tornadoes won the quotient with 25 points, two markers ahead of the Lifesavers.

But as of posting time, Foton needs a losing result from Cignal, which battles battling F2 Logistics, to secure the No. 3 spot and set a knockout quarterfinals showdown with No.6 PLDT on Thursday at the Arena in San Juan City.

If Cignal beats F2 Logistics, the HD Spikers top the quotient and steal the third spot, while Foton drops to No.4 facing fifth placer Generika-Ayala in the quarters.

Nobody scored in double figures for Marinerang Pilipina with Dimdim Pacres and Judith Abil leading the way with nine and eight markers, respectively, finishing its first conference winless and will face No.1 Petron (13-1) in the knockout quarterfinals also on Thursday.