NATIONAL coach Roger Gorayeb said he has nothing but gratitude for the players who answered the call to play for flag and country in the Asian Under-23 Women's Volleyball Championship.

The multi-titled coach said he has nothing more to ask for from 11 players led by UAAP star Alyssa Valdez, National U standout Jaja Santiago and University of Santo Tomas pair Ria Meneses and EJ Laure who will fly the flag in the May 1-9 showpiece at the Philsports Arena.

The tough-looking mentor almost became emotional when asked about the situation of the team during its practice on Friday evening at the Blue Eagle Gym inside the Ateneo campus, praising the players for making personal sacrifices for the sake of the country.

Although there is one more slot for a setter in the team that actually started out as a 14-member pool, Gorayeb said are more than enough. 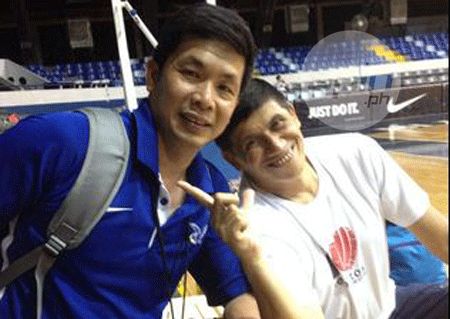 At the end of the exhausting three-hour training made up of drills and ball exercises under Ateneo coach Tai Bundit, Gorayeb gathered the team for a huddle and had only one thing to say to the players.

As his players kissed him goodbye, Gorayeb praised the players for their dedication and commitment to the cause.