Here, plain and simple, is single biggest reason why La Salle spikers are so successful

PLAYERS have come and gone in the 10 successive years that La Salle has reached the UAAP women's volleyball finals, winning it six times. But one remains constant -Ramil de Jesus.

Now on his 21st year as head coach of the Lady Spikers, de Jesus has shown no sign of slowing down. He is in fact on track for an 11th career championship when top-seeded La Salle takes on second seed Far Eastern University in a best-of-three finale starting on Saturday.

So what makes de Jesus tick?

The answer is plain in simple.

There is nothing fancy about the guy. He isn't as good a dancer on the sidelines as Ateneo rival Tai Bundit, or as glib as Roger Gorayeb. Neither does he do those attention-grabbing and often senseless outbursts you routinely see from coaches on live television.

Instead, as his longtime assistant Noel Orcullo attests, the instructions during de Jesus' timeout huddles are a reflection of what the man is - snappy and direct to the point.

No drama, no sarcasm. Just a no-nonsense guy talking some sense into his players. 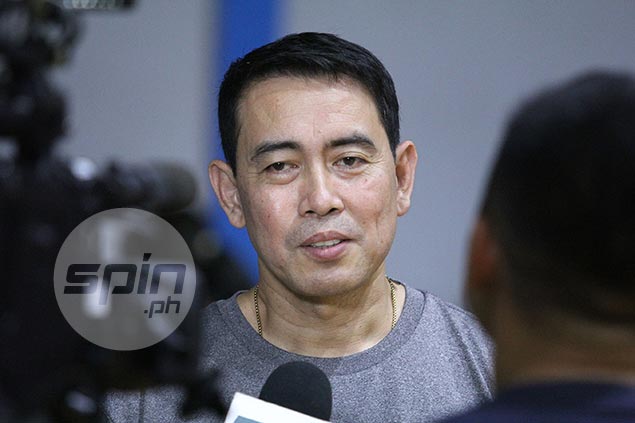 More than rival coaches in the UAAP and the Philippine Super Liga, delos Santos and de Jesus actually go back a long way. Delos Santos was a freshman at Far Eastern University in 1995 when de Jesus, a former outside spiker for the Morayta-based squad, was on his first year as trainer.

Sixteen years later in the finals of UAAP Season 73, delos Santos' Tigresses were already at set point, 24-19, and looking to extend the match to a fouth set when de Jesus' Lady Spikers mounted a comeback that still eats up delos Santos to this day.

Last year in the PSL Grand Prix, delos Santos’ Petron team was just a set away from the title leading 9-0 in the third set when de Jesus’ F2 Logistics turned the tide with an all-too-familiar comeback.

La Salle joined the UAAP in 1986 shortly after bolting the NCAA and the Lady Spikers won their maiden title in 2000 when de Jesus came in. He now has 10 UAAP championships, including two three-peats (2003-2005 and 2011-2013) that will become three if La Salle beats FEU in this year's finale.

“Coach Ramil has a passion for the sport itself, and passion to train each player he handles,” shared Manila Santos-Ng, the only La Salle volleyball player whose jersey was retired by the Taft-based school.

“I remember him telling stories on how/what is volleyball during his time, and how it evolved. He loves the sport so much and all the players are lucky to be under him because aside from that, he knows how to develop players to reach their maximum potential,” she added.

Reyes was an outside spiker who de Jesus converted into a setter after one player got pregnant. She became one of the best in the league - thanks to de Jesus' painstaking guidance.

RDJ’s tough love for his players is well-known. A lot of people don't get it. But the players actually do. It's also perfectly all right for the players that he is timid with praise.

“He might be strict but alam mo naman magiging fruitful.” said Reyes.

Over the years, however, some Lady Spikers feel their coach has lightened up a bit, so much that some of the current players, like Kim Dy, for example, can now enjoy light moments with the tough drilllmaster.

There was even a post-game interview last Valentine’s Day when the Lady Spikers gifted their coach not only with a win but also a bouquet of flowers, leaving de Jesus blushing and smiling from ear to ear revealing a pair of dimples. 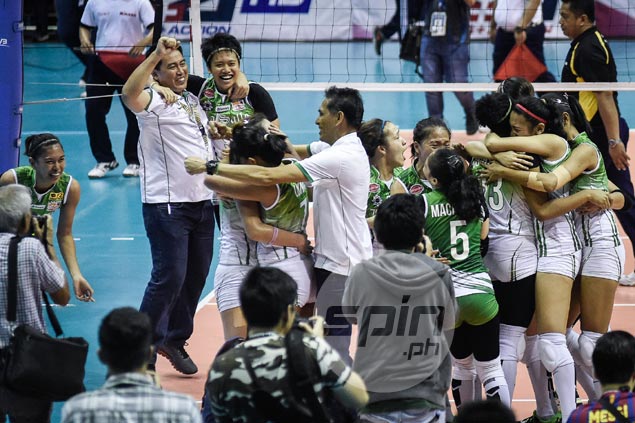 But that doesn't mean he has softened up. One thing he can't tolerate - his players swore - is a diva.

For most of these players, de Jesus is a simply a father shaping the future of his daughters, who, more often than not, become successful wherever they ended up next.

“He is a disciplinarian like a real father. He is very strict when it comes to studies and sport. He makes sure we are all doing our home work and not lacking in anything. He will always ask us how our grades are and he will do his best to monitor and remind us from time to time,” Santos-Ng explained.

“The tough love coach Ramil has for the players may seem difficult to understand for the current players, but in time, they will realize how beautiful and effective these strategies are. I’m sure they will love coach Ramil back.”