LAOAG — Premier Volleyball League officials will not punish or require to pay a fine in case an individual violates its health and safety protocols inside the bubble.

But if a player contracts the virus, the team will shoulder the Covid-19 test and pay a price for affecting the team’s campaign in the Open Conference, starting on Saturday at the PCV Socio-Civic Cultural Center in Bacarra.

PVL official Tony Boy Liao said in case a player breaches the bubble rules and gets sick, her roommates will be isolated.

Two to three players are sharing one room at Fort Ilocandia, where they are only allowed to go out during conditioning training in open spaces of their hotel or during their one-hour training at the game venue.

It could take at least two weeks for a patient to recover from Covid-19.

The single-round robin eliminations will only run for three weeks starting on Saturday and only four teams will advance to the semifinals.

“Kung ang team mo you only have 14 players, 11 na lang yun wag sana mangyari, knock on wood, dalawa nagpositive magkaibang kwarto anim na players yun,” he said. “We will allow the teams as long as they have eight players to play.”

So far, so good 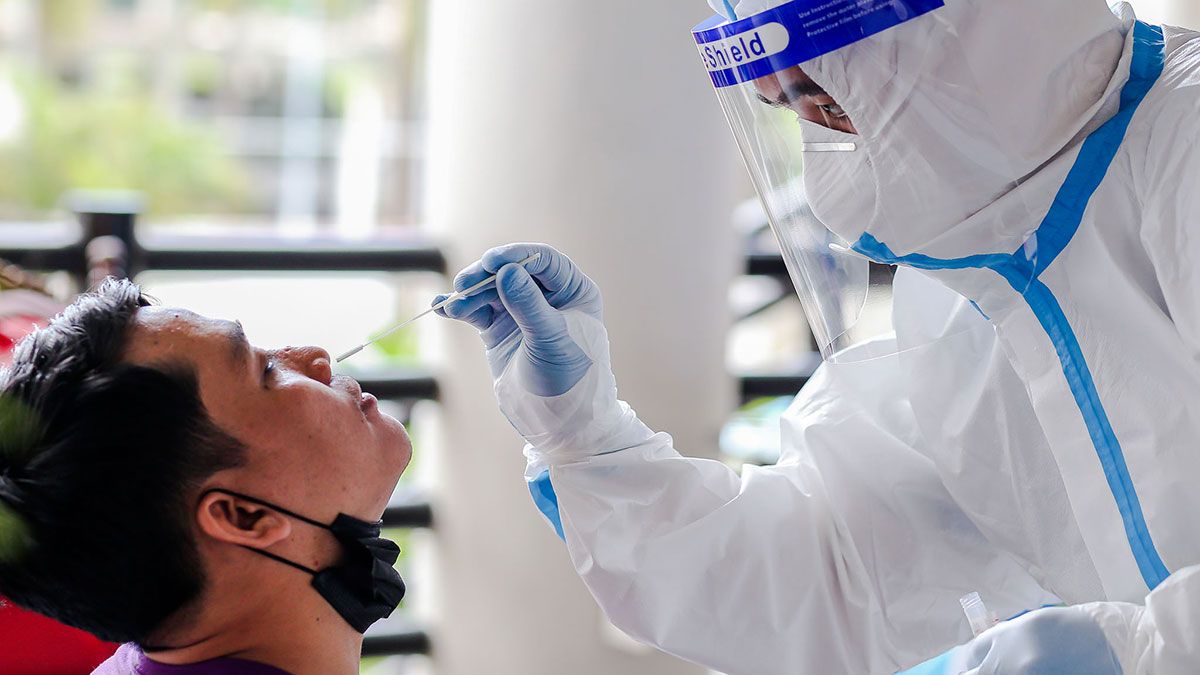 A total of 228 team members at Fort Ilocandia and 104 league and technical officials, media and TV production at Java Hotel have tested negative in their RTPCR and antigen tests.

The delegates had another RT-PCR swab on Thursday morning and will undergo antigen every 10 days.

PVL president Ricky Palou said they are having mixed emotions this bubble: happy that volleyball is finally returning to action, but still wary of the ongoing pandemic.

Palou added the teams are all happy, comfortable and following the protocols but they always remind everyone not to let their guards down.

“That’s why we keep on telling everybody please be very careful,” he said. “Social distancing wag kayo pagala-gala. When somebody gets infected, you get pulled out, your team gets affected.”

There will be no switching court sides during PVL games as part of health and safety protocols at the PCV Socio-Civic Cultural Center in Bacarra.

Competing teams will not switch court every after set for their safety and to give way for sanitation of court, net and balls and to minimize close contact between both squads.

The successful FIVB Volleyball Nations League (VNL) 2021 observed the no-change-court rule during its bubble tournament for men and women in Rimini, Italy.

Palou said the 10 teams understood that they have to stay on the same court for the whole game for their safety.

“Okay lang sa kanila kasi it’s for their own good. Kasi the teams they have their own equipment, water so pag lumipat, kung may infected doon, madadamay lahat,” Palou said.

“They understand naman, in fact, they welcome it nga at this point in time for safety precautionary measures.”

Even during the warm ups, the players are only allowed to prepare on their own side. Stretching for 30 minutes before the introduction of teams and match officials and will be given another 10 minutes for ball warm-ups for and another five-minute spiking drills.

All the teams are only allowed to bow since handshakes are prohibited. Wearing masks is optional for the starting six and libero, head coach, first and second referee.

The substitute players, coaching staff, and the rest inside the venue should wear mask and observe social distancing from their benches all the time.

After the game, the players are not allowed to huddle and take a shower, they can only change clothes and go directly to the exit doors.

The teams for the next game can’t enter the venue as long as the squads of previous match are still inside, that’s why play dates are scheduled 1 p.m., 4 p.m., and 7 p.m. for triple-headers and 3 and 6 p.m. for double-headers and to also give more time for the 30-minute court sanitation.

Only a maximum of 100 people is allowed inside the PCV Socio-Civic Cultural Center.