THE champion of the ongoing Premiere Volleyball League (PVL) Invitational Conference will represent the country in the Asian Volleyball Confederation (AVC) Cup for Women that starts in two weeks at the PhilSports Arena in Pasig City.

The Philippine National Volleyball Federation (PNVF) decided on Sunday morning to field the PVL Invitational champion, instead of a 14-member national team that had 12 players from the National University (NU) varsity squad.

The PNVF, through its president Ramon “Tats” Suzara, officially informed NU president Dr. Carlos Ermita, Jr. of the development in an email sent on Sunday.

“We are now writing to inform your good office, though with much regret, that we shall be releasing the NU student-athletes and coaches from the national training program, effective today [Sunday], 7 August 2022,” the PNVF said in its letter to Ermita.

“We have been compelled to make this difficult yet important decision due to the recent turn of events within the team's training schedule and corresponding availability. We feel that the said student-athletes and coaches, alongside the team manager Engineer Bing Diet, may not be able to commit to perform at their best level given a number of restrictions and conditions that hinder the continuous conduct of training and overall program,” the PNVF said.

The federation added: “However difficult it may have been, please trust that with this decision, we have considered to serve only the best interests and utmost welfare of the student-athletes, the coaches, the university management, the national team program, while keeping aligned with PNVF's strategic goals as a national federation, fully responsible and accountable for the sport of volleyball in the Philippines.”

The PNVF, Suzara said, will request the PVL Invitational champion to include the two non-NU players on the national team—Jelai Gajero of California Precision Sports and Trisha Genesis of Akari — to be its 13th and 14th player on the lineup.

The reorganization of the national team to the AVC Women’s Cup came a day after the announcement of the composition of a team composed of collegiate players.

PVL president Richard “Ricky” Palou, also the PNVF treasurer, as well as the management of the potential winners of the Invitational, agreed to lend their players for the AVC Cup event set from August 21 to 29.

The NU-laden national team was supposed to be one of two guest teams — the other being Chinese-Taipei club KingWhale — in the Invitational, which it will use as an official national team program tune-up for the AVC Cup.

The national team was supposed to face Creamline at 5:30 p.m. on Monday, but following the reorganization of the squad, the PVL had to revise its schedule. 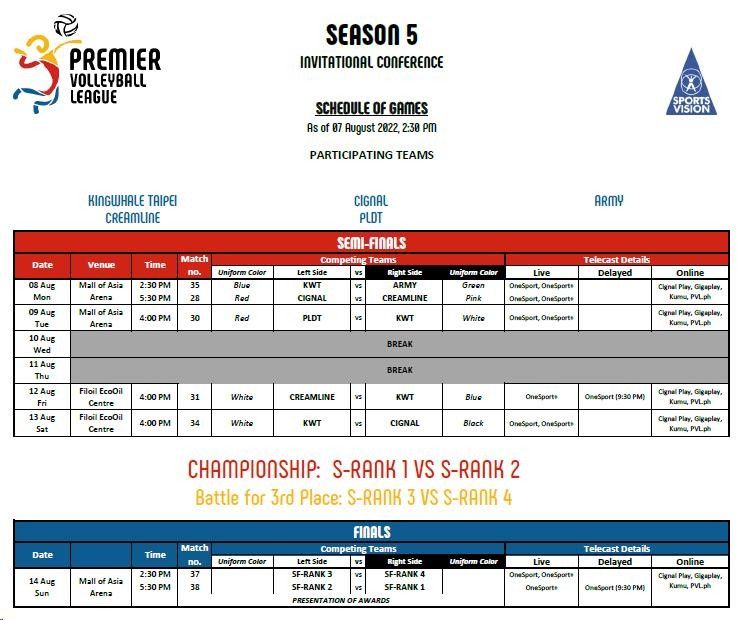