Season MVP Alyssa Valdez racked up a total of 29 points for the PLDT HOME Ultera Ultra-Fast Hitters while Jaja Santiago and Gretchel Soltones chipped in 17 points each.

Jovelyn Gonzaga was the biggest contributor for the Lady Troopers with 19 points, followed by Dindin Santiago-Manabat with 17 points, Mary Jean Balse with 13 points and Rachel Anne Daquis with 11 points.

The Lady Troopers almost won in the fifth set, but the Ultra-Fast Hitters fought hard and came out on top after spectacular plays from Valdez and Santiago, 7-5. Santiago was named Finals Most Valuable Player after her ultimate comeback score propelled the team to its first Shakey’s V-League Open Conference crown.

“We are so proud of the PLDT HOME Ultera Ultra-Fast Hitters for their victory at this year’s Shakey’s V-League,” PLDT VP and HOME Marketing Head Gary Dujali said. “They have done tremendously well throughout the entire season as a team and as individuals, and we are honoured to have them represent our brand and inspire the country towards sports excellence. It was an exciting and memorable season not only for the participants, but also for the volleyball enthusiasts and their families who enjoyed and supported each game.”

Presented by PLDT HOME Ultera, the Ultra-Fast LTE for a Happy Family, the Shakey’s V-League Season 12 Open Conference ran from April 5 to May 31. A total of eight teams participated in this league including PLDT, Baguio, Cagayan Valley, Fourbees, Meralco, Coast Guard, Navy and Philippine Army.

Shakey’s V-League is among the projects supported by PLDT HOME Ultera as part of its sports advocacy. Earlier this summer, PLDT HOME Ultera also implemented the Install Patrol tour together with the country’s top coaches, volleyball superstars and the local government units, in which they visited numerous cities nationwide to promote volleyball to young athletes at the grassroots level.

PLDT HOME Ultera delivers Ultra-Fast LTE for a Happy Family with Internet speeds of up to 10 Mbps for as low as P999 a month, reinforcing that the strongest connections are at home. For more details, log on to pldthome.com. 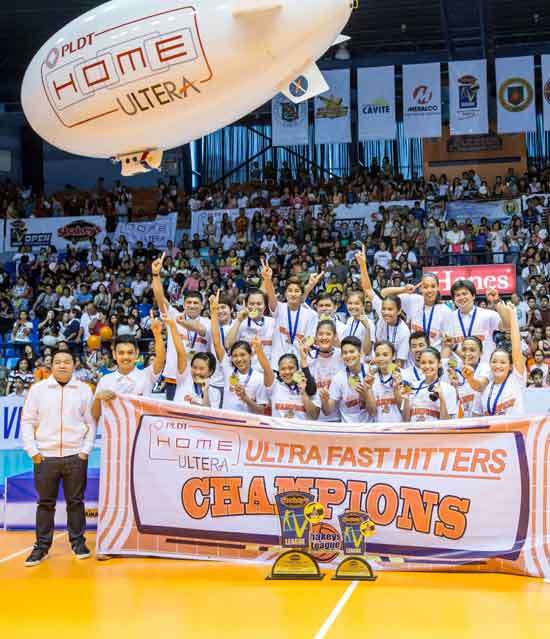