THE Philippine Superliga issued a call for unity ahead of the elections for volleyvball's national association, saying the focus should be on bringing back the sport to its feet amid the pandemic and not on politicking.

PSL president Dr. Ian Laurel released a statement on Friday encouraging fellow volleyball stakeholders to 'set aside personal interests' and work for the return of volleyball from 10 months of inactivity due to the COVID-19 pandemic.

"It is with utmost humility that I hope we can put our personal interests aside and put the interest of Philippine Volleyball above our egos and personal gains," Laurel said.

"Now is not the time to draw out party lines and divide the volleyball community even deeper. In fact, this is the time to break down the walls that divide us for the greater good of the sport that we all love. Let us work together to prevent another era of divisiveness." 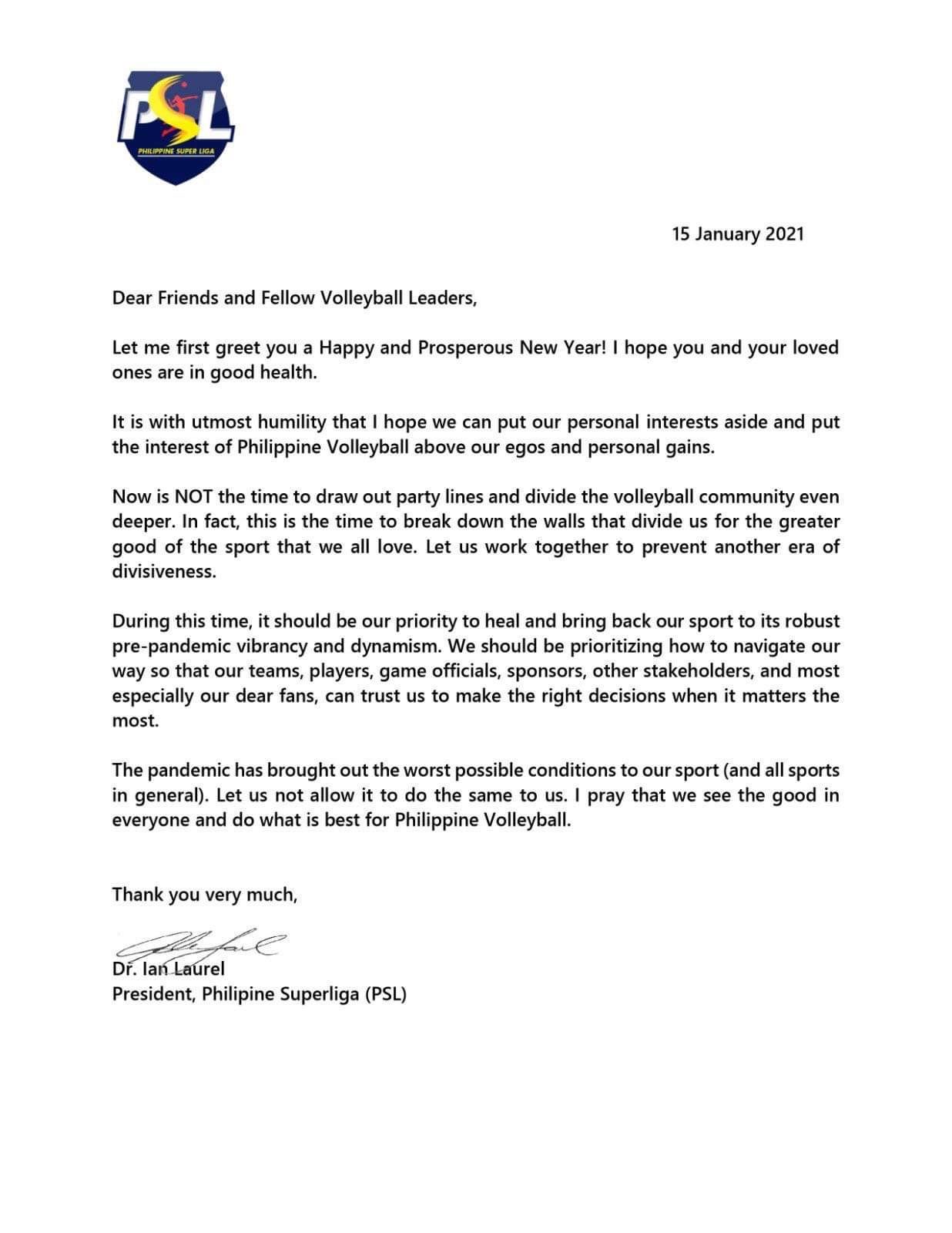 Soriano, sources said, is being groomed to run for president of the new association which will be formed after the elections called by the international volleyball body and to be supervised by the Philippine Olympic Committee (POC).

The PSL bloc, which for years has been allied with LVPI president Joey Romasanta, has not made any announcements in connection with the elections which is set either in the third or fourth week of the month.

Instead, Laurel called for an end to hostility among the rival leagues.

"During this time, it should be our priority to heal and bring back our sport to its robust pre-pandemic vibrancy and dynamism," Laurel said.

"We should be prioritizing how to navigate our way so that our teams, players, game officials, sponsors, other stakeholders and most especially our dear fans, can trust us to make the right decisions when it matters the most," he added.

No official volleyball game or training has been held in the country since the last playdate of PSL Grand Prix on March 10, 2020.

All the volleyball teams in the country, even the national squad, haven't received a go signal from the government to conduct face-to-face trainings.

The PSL is looking to return to action through the Beach Volleyball Challenge Cup under a bubble format in Subic on February 25 to 27 and is hoping to stage the All-Filipino Conference tentatively set on March.

On the other hand, the PVL has announced plans to turn professional through the Games and Amusement Board (GAB), clearing the way for its teams' return to practices and eventually to competition.