PLDT HOME Ultera brings the best collection of volleyball talent to a weekend of ultra fun for the family at the Puerto Princesa City (PPC) Coliseum, capping a near week of incredible activities which started in the westernmost province of the archipelago as early as Monday.

Members of the renowned Amihan and Bagwis teams will be conducting a volleyball clinic and an exhibition match aimed not only to promote the sport but also to introduce PLDT HOME Ultera, the ultra-fast wireless LTE for the home.

Other members of the squad are scheduled to fly in before the main activities begin on Sunday, April 26th.

The undertaking actually kicked off last Monday when top coaches began an intensive volleyball clinic for select participants. Before the weekend, coaches from the Amihan and Bagwis teams will join the clinic.

The real fireworks, however, begin on Saturday, April 25th, when the players begin arriving in Puerto Princesa with the first group arriving at about 9 a.m.

Guestings and mall tours are scheduled to drum up the Sunday showpiece. The contingent will also pay a courtesy call on city officials led by Mayor Lucilo Rodriguez Bayron as well as provincial officials led by Governor Jose Chavez Alvarez.

Sunday’s activities begin as early as 8 a.m. with a motorcade around Puerto Princesa. After lunch, the Install Patrol (the collection of Amihan and Bagwis players) hold a meet-and-greet outside the PPC Coliseum with the much awaited volleyball clinic and exhibition match to follow shortly after.

As a large turnout is expected, only those who are at venue early enough will be admitted. However, those fortunate enough to subscribe to a PLDT Home Ultera plan will have a rare opportunity to rub elbows with their favorite players as they will have a special audience with the Install Patrol upon subscribing.

So to those in Palawan looking to have a once-in-a-lifetime chance to get to know the best volleyball players in the land, be part of history this Sunday.

Puerto Princessa City, Palawan is one of the many areas powered by PLDT HOME Ultera. For a chance to win free tickets to the biggest sporting events this summer, create a myHome ID, linked to your Ultera account.

PLDT HOME Ultera delivers Ultra-Fast LTE for a Happy Family with internet speeds of up to 10 Mbps for as low as P999 a month. It is currently available in PLDT Sales and Service Centers, Smart Stores, and PLDT HOME Booths nationwide.

To know more about PLDT HOME Ultera log on to www.pldthome.com. 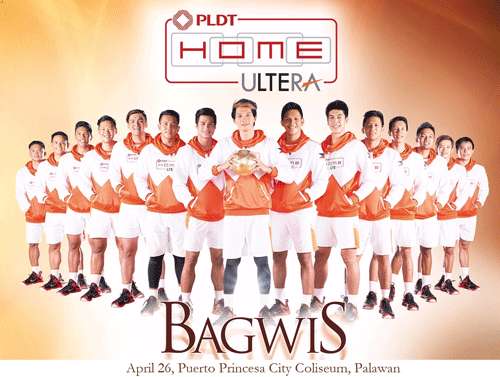