Already without skipper Ara Galang, the Lady Spikers, the pair claimed, also lost their valuable ‘sixth man’ during Game One of the UAAP women’s volleyball finals against Ateneo with the vaunted La Salle crowd smaller than usual at the Smart Araneta Coliseum.

Both Gumabao and Gohing rued support from fans was left wanting as the team got clobbered by Alyssa Valdez and the highly-motivated Lady Eagles in straight sets, 25-19, 25-18, 25-18.

The two former Lady Spikers noted how blue-shirted Ateneo fans made up well over half of the crowd inside the Big Dome.

Galang, the best player of the team, suffered an ACL, MCL medial meniscus tear and big bone bruises on her left knee during the stepladder semis and was ruled out of the finals.

As if that was not enough, Camille Cruz also suffered an ALC tear on her right knee during the third set of the series opener. 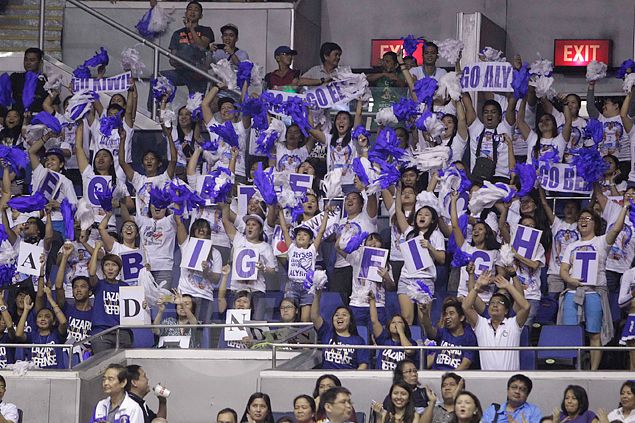 It is during this time of adversity, according to Gohing, when the team badly needs the cheers and support of La Salle students and alumni.

To help boost the morale of the backed-against-the-wall Lady Spikers, who need to beat their longtime rivals three straight games to reclaim the title, the former champion players have called out for more support.

“I really hope and pray that this Saturday lumabas or manood silang lahat,” Gumabao pleaded.

Despite the tremendous odds the team is facing, both Gumabao and Gohing still believe coach Ramil de Jesus and the Lady Spikers can recover and rise above the challenge.

“I still have hope. I still believe in them and kung gusto talaga nila, kakayanin nila. But we'll see on Saturday if gusto nila, if gusto ng puso nilang manalo. But whatever happens naman, we'll always be here cheering for them,” said Gumabao.

“Wala nang atrasan, siguro gawin na lang nila 'yung best nila para whatever happens the next day, they won't regret as long as they did their best,” said Gohing.

Game Two of the series is set at 3:30 p.m. at the Mall of Asia Arena, with Ateneo needing just one more win to retain its title.