Kathy Bersola, UP Lady Maroons studied La Salle as if they were preparing for thesis defense

UNIVERSITY of the Philippines standout Kathy Bersola and the rest of the Lady Maroons studied La Salle's game as if they were preparing for a thesis defense.

Bersola bared the Lady Maroons coaches and players spent the days leading up to the match against the defending UAAP women's basketball champions poring over reams of statistics, PowerPoint presentations, scouting reports, and videos.

From the video room, they then moved to scrimmages where the coaches ran through every single detail about the attack, defense, and tendencies of a La Salle team that until Wednesday afternoon looked tough to beat.

The hardwork translated into a rousing 25-22, 25-21, 25-19 win over the Lady Spikers on Wednesday at The Arena in San Juan - the Lady Maroons' first against the UAAP power in nine years, or since winning in 2008 after one La Salle player was declared ineligible.

The victory was stunning as it was emphatic. The Lady Maroons dominated La Salle in almost every single department, converting more attacks (39-23) and aces (7-3) while showing off a better defensive ploy (60-38 digs).

UP coach Jerry Yee begged off from the post-match interviews saying his blood pressure shot up during the game, but his assistant Rald Ricafort was there to reveal how fastidiously the team worked with the help of another coach, noted stats guy Benson Bocboc.

The pre-game bull sessions were no different from a lecture, he added. 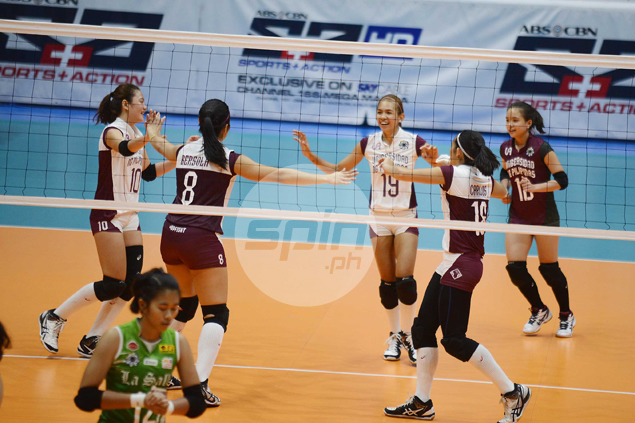 Bersola was the first to attest how the detailed preparations made the job a lot easier for the Lady Maroons the moment they entered the court.

With every La Salle attack, it was as if the Lady Maroons knew where the ball was going. They also pounced on every single hole in the Lady Spikers' defense.

The Lady Maroons' third win in a row, coming at the expense of the reigning champions at that, had suddenly raised expectations of a first championship in 35 years for State U.

But Bersola isn't worried about the Lady Maroons suddenly becoming overconfident, counting on the disciplinarian Yee to keep the players grounded.

In fact, the Lady Maroons were back in practice the day after the famous win over La Salle. They play University of Santo Tomas on Sunday yet.

Yee also is never remiss in reminding the players not believe everything they read, especially on social media.