LESS than two months after the horror knee injury that deprived her of a stint in the last UAAP women's volleyball finals, De La Salle star Ara Galang is taking it one step at a time as she tackles the road to recovery.

The soft-spoken but hard-hitting Lady Spikers captain made a rare appearance at the Shakey's V-League games on Tuesday, able to walk without the help of crutches and with no imobilizer to protect her injured knee.

The fourth-year Enterpreneurship student admitted there's still pain in her left knee, months after tearing her ACL, MCL, and medial meniscus tear and suffering a big bone bruise after an awkward fall in La Salle’s stepladder semifinal match against National University in the UAAP in March.

But more than the pain in her knee, Galang admitted suffering emotionally due to the injury, enough to lose her appetite which she said hasn't gone back to normal. 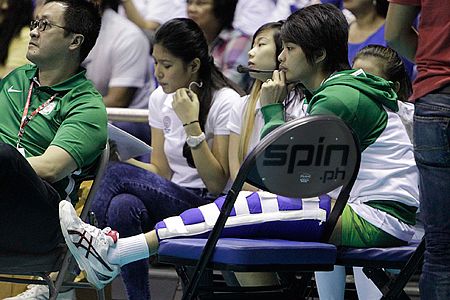 Still, Galang is heartened by the small progress she makes every day, trying to stay patient as she works hard to be fit enough to join the Lady Spikers in time for the next UAAP campaign.

Doctors have given her six to eight months to make a full recovery.

These days, Galang splits her time between classes and therapy sessions, which took the time usually alotted for volleyball practices with the Lady Spikers in the morning and sometimes late in the afternoon.