Basketball is Ara Galang's first love - and Kobe Bryant, Michael Jordan will always be her idols

NOT all cases of first love last.

And in some instances, a heartbreak may end up leading one to his or her true love.

Take the case of De La Salle star Ara Galang, who once dreamed of doing crossovers inside a basketball court and swishing balls through the net - not spiking over them.

The soft-spoken Lady Spiker shared to SPIN.ph how she and her friends in elementary scgool dreamt of making it to the girls’ basketball team at Holy Family Academy in Angeles City, Pampanga, only to be told the only available club team for girls was volleyball.

This twist of fate became a blessing in disguise for Galang as she proved to be a natural in volleyball, becoming part of the school's varsity, then getting recruited for an athletic scholarship in high school and college, first by Angeles University Foundation before landing a spot in one of the country's most successful volleyball programs in La Salle.

Galang pointed out, though, that in the event volleyball didn't pan out for her, she would still have found a way to satisfy her thirst for competition in some other sport.

Her competitive fire and single-minded determination was none more evident than during her recovery from a horro injury in last year's UAAP playoffs against National University when she suffered tears to her ACL and MCL tendons and big bone bruises in her knee.

Not only did she endure months of recovery and rehabilitation, Galang also came back earlier than anticipated and has since played with no fear. 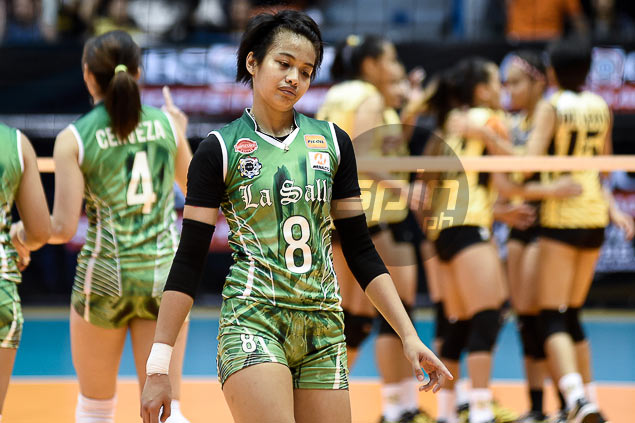 She traces this competitive nature back to her first love, specifically from her two basketball idols who also happen to be ruthless competitors - Michael Jordan and Kobe Bryant.

There's one more thing competitors like Galang love: winning. And on her final year in the UAAP, there's nothing more Galang wants than bringing back the championship to Taft after archrival Ateneo took away the title from them in the last two seasons.

Galang though is careful not to get ahead of herself.