SUBIC - Hong Kong bets dominated the junior elite division in Day One of the 2015 ASTC Asian Triathlon Cup in Subic Bay on Saturday.

Yu Hang Kok beat compatriot Michael Lam by one second with a time of 56 minutes and 54 seconds to take the gold in the men’s junior elite. Oscar Coggins finished third to complete a podium sweep for Team Hong Kong.

“In the swim, I was kind of worried because there were some jellyfish, on the road it was a little bit hot but I was able to manage it,” said Kok, a first-time winner in the ASTC.

In the distaff side, Camden Richter (1:05:38) and Cheuk Yi Hung of the former British colony took the gold and silver medals, respectively, with Yu Yan-huang of Chinese-Taipei settling for the bronze.

Richter, the defending champion, said she benefited from her familiarity with Subic, having raced in the freeport three times previously.

“(Coach) told me to go out really hard because it was a smaller race and there wasn’t that many people to fight in the water to get to the first buoy and to try and stay away as long as I could,” said Richter, who considered the run the most difficult due to the heat but kept it up to finish strong.

Bailee Brianna Brown of Hong Kong also claimed first place in the women’s mini sprint in the 13-15 category with a time of 48:52. Coming in second and third were Nicole Eijansantos and Sam McInnes, both from the Philippines.

Another international participant who came in strong was Mohamad Chebat of Syria who bested Filipino athletes Austin Morfe and Joaquin Rafael Tayag in the men’s sprint (16-19 age group). 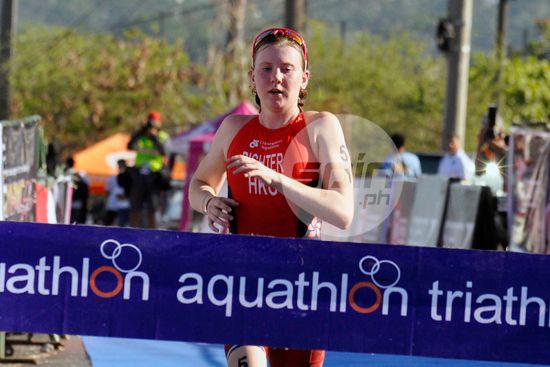 On Sunday, close to 600 triathletes will be seeing action in mini-sprint, sprint and standard distance events around Subic Bay.

At stake is P600,000 in cash for the elite category winners and P10,000 for the Century Tuna Male and Female Superbods awards.