MELBOURNE, Australia — Searching for inspiration when he was down two sets and facing triple break point, with his prospects of winning a record 21st Grand Slam title almost shot, Rafael Nadal thought back to some of his most difficult defeats.

A renowned right-to-the-end competitor, Nadal dug deep in that critical moment and won the next four points to survive the immediate threat from Daniil Medvedev. Minutes later he held for 3-3 in the third set and swung the momentum of the Australian Open final around.

The 35-year-old Spaniard now has one more major title than Roger Federer and Novak Djokovic, his long-time rivals in the so-called Big Three.

He was the only one of three who had a chance to claim the record solo in Australia.

Federer is still recovering from knee surgery and Djokovic was sensationally deported from Australia on the eve of the tournament because he wasn't vaccinated against COVID-19.

It's all history now that Nadal, who has had injury problems of his own has become just the fourth man to win all four of the sport's major titles at least twice.

"I was repeating to myself during the whole match, 'I lost a lot of times here having chances, sometimes I was a little bit unlucky,'" Nadal said. "I just wanted to keep believing until the end."

"Tonight has been unforgettable. I feel very lucky." 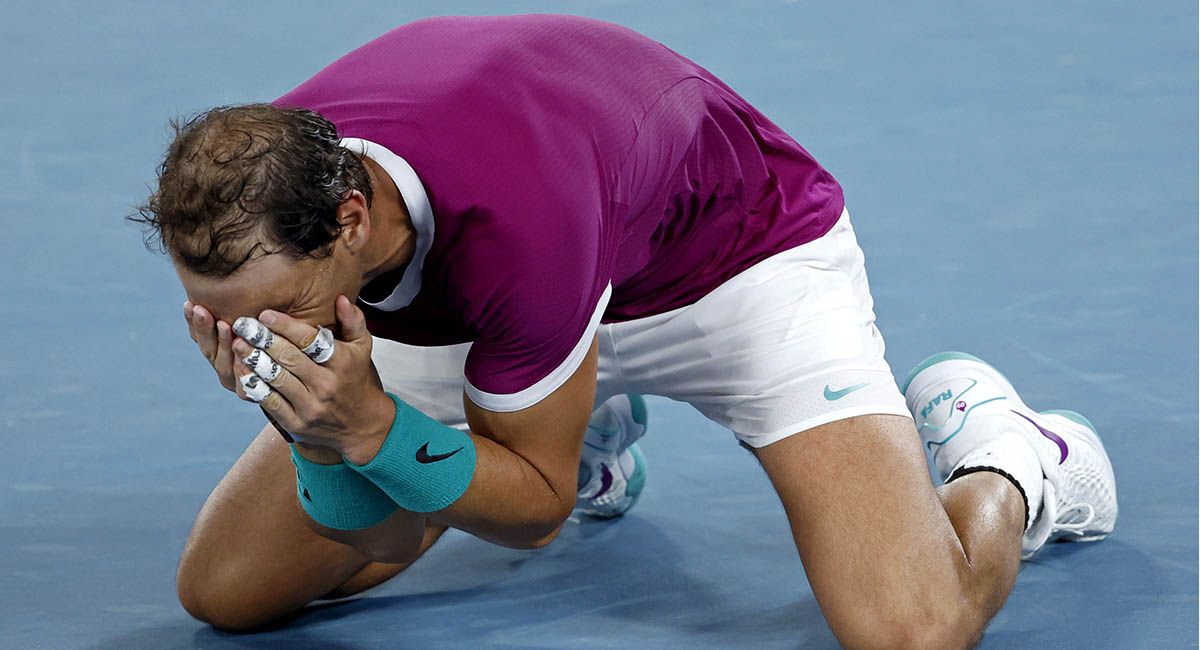 Nadal was broken when serving to serve it out for the first time at 5-4 in the fifth set, but he made no mistake two games later, converting the first of his championship points.

Taking everything into account, "the scenario, the momentum," he said, "without a doubt probably the biggest comeback of my tennis career."

Certainly, he added, "The most unexpected. And most surprising, I think, for everyone."

On Monday, Nadal indicated he wouldn't be reducing his schedule for the rest of 2022.

"Of course, after this month of practicing hard, playing very long matches, the foot was able to hold all this stress, of course I feel more confident that I going to have the chance to keep going, keep fighting, keep enjoying this beautiful sport," he said. "That's what make me happy. I just feel confident now that I going to have my chances to keep playing tennis for a while, yeah."

Federer and Djokovic were watching the final, from a distance, and both used social media messages to offer congratulations to Nadal for breaking their three-way tie atop the men's Grand Slam standings.

Nadal and Medvedev packed a lot of drama into the final that started Sunday night, was delayed in the 84-minute second set when a human rights activist jumped onto the court, and finished close to 1:15 a.m.

Nadal was serving for the second set but was broken in that game. Then Medvedev had his moments to break again in the third set but admitted he got tight.

"Should have done better. Should have hit a winner," Medvedev said. "Maybe would have won the match."

"Tactically nothing changed," he added, "but Rafa stepped up."

Indeed, he did. And at 1:30 a.m. he stepped up onto the podium to give his victory speech.

In the background, Rod Laver, the 83-year-old Australian tennis great for whom Melbourne Park's main stadium is named, was holding up his smartphone to capture the scenes. A woman nearby held up a sign that stated: "Rafa is the GOAT."

Later officials released a short video of Laver and Nadal embracing in what appeared to be the player gym. Laver had apparently asked tournament officials to allow him to congratulate the fellow legendary left-hander and new singles major leader.

For now, in terms of men's major titles at least, Nadal is the Greatest Of All Time.

Nadal praised Medvedev for the part he played in what eventually became the second longest Australian Open final ever. Nadal's loss to Djokovic a decade ago, lasted 5:53.

Nadal's 21st major title was even more remarkable considering he had two matches under his belt in the second half of 2021 because he was sidelined with a chronic foot injury. He also overcame a bout of COVID-19.

"For me, it's just amazing," he said, adding that it was only six weeks ago "I didn't know if I'd be able to play on the tour again."

Nadal won his first Australian Open title in 2009 and then lost four other finals here. His conversion rate in major finals is now 21 out of 29.

Medvedev, who was aiming to be the first man in the Open era to win his second Grand Slam title at the very next major, was ever-so-close to spoiling another 21st celebration.

Djokovic was chasing the same record at the U.S. Open last year, and a calendar-year Grand Slam, when Medvedev beat him in straight sets in the final.

Federer also had his chance at 21, but Djokovic stopped that after saving match points en route to winning the 2019 Wimbledon final.

For Nadal, this was just the fourth time — and first since 2007 — he's rallied from two sets down to win a best-of-five-set match. It's the first time it has happened at the Australian Open final since 1965.

Medvedev, who lost the 2021 final in Melbourne to Djokovic, began his post-match news conference by talking about having been "a young kid who dreamed about big things in tennis" who now has become a bit disillusioned. He spoke a little later about being disappointed in the way spectators treated him in the final and earlier in the tournament.

"From now on, I'm playing for myself," Medvedev said. "For my family. To provide (for) my family, for people that trust in me. Of course for all the Russians, because I feel a lot of support there."

Medvedev continued his love-hate relationship with Australian crowds. He stayed calm for the first two sets before complaining about the yelling and noise between first and second serves.

After Nadal broke him in the third game of the fourth set, on a double-fault, Medvedev walked to the changeover giving an ironic thumbs-up to the crowd.

After Medvedev served a double-fault to open the fifth set, Blom warned the crowd that anyone yelling between first and second serves could get kicked out by security.

Medvedev did manage to hold that game but in the end he didn't quite have the endurance.

"I want to congratulate Rafa," he said. "What he did today was amazing. You're an amazing champion."