MELBOURNE, Australia — Rafael Nadal left the muttering and the preening, the underarm serving and the 'tweening, to his younger, flashier opponent, Nick Kyrgios.

Surely, Nadal was content to collect the win in the latest installment of their rivalry.

The No. 1-ranked Nadal kept his thoughts to himself and limited his shot-making to the more traditional variety in an entertaining 6-3, 3-6, 7-6 (6), 7-6 (4) victory over home-crowd favorite Kyrgios on Monday to reach the Australian Open quarterfinals and get closer to a record-tying 20th Grand Slam title.

"What can I say again about Nick? When he is playing like today, with this positive attitude, he gives a lot of positive things to our sport. So I encourage him to keep working like this," Nadal said. "Honestly, he is one of the highest talents that we have on our tour."

Here's how the elevated stakes and tension affected both men: At 5-all in the pivotal third-set tiebreaker, Kyrgios double-faulted. That offered up a gift-wrapped set point. But Nadal failed to take advantage because he double-faulted right back.

Still, two points later, the 23rd-seeded Kyrgios put a forehand into the net, and the set was Nadal's. Not long after, Kyrgios double-faulted again to get broken at love.

That put Nadal ahead 2-1 in the fourth, seemingly in charge.

"Against Nick," Nadal would say afterward, "you are never (in) control."

Sure enough, Nadal faltered while serving for the win at 5-4, double-faulting to create a pair of break points, the second of which Kyrgios converted with a jumping forehand and celebrated by throwing his head back and screaming. Spectators rose and roared and waved their Australian flags in support of the 24-year-old from Canberra.

"A scary game," Nadal called it.

But he regrouped and pulled the win out in the closing tiebreaker, which ended with Kyrgios putting a forehand into the net. 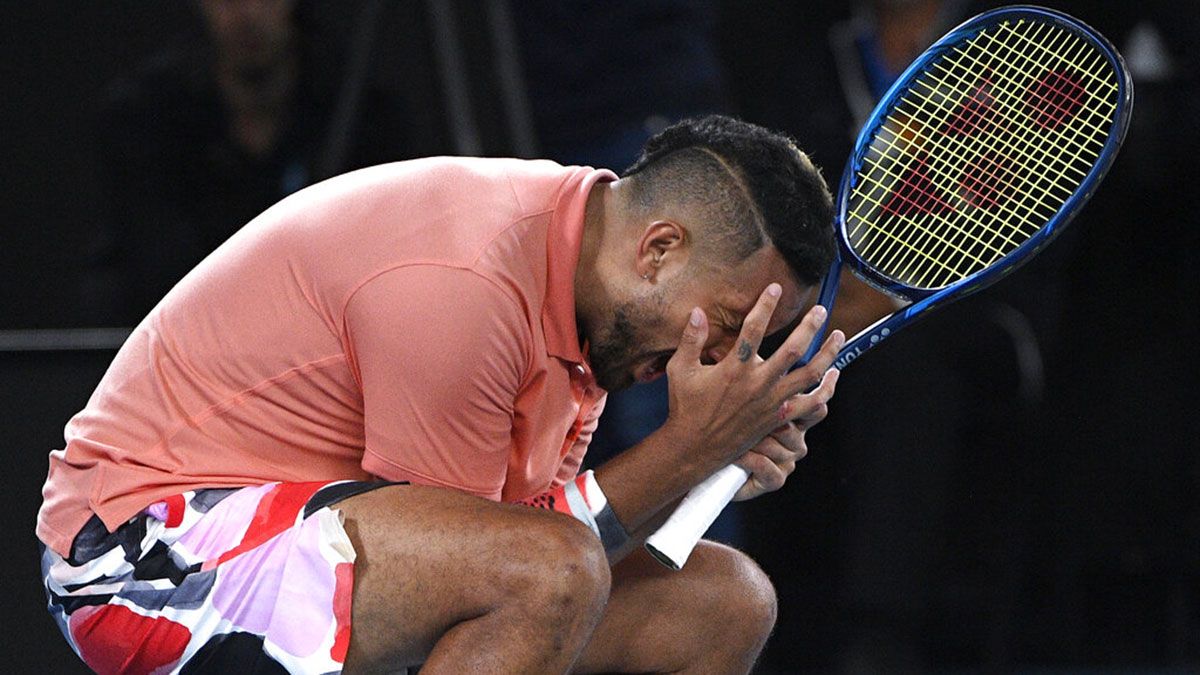 Nadal was just the better player overall. One measure: Nadal finished with more than twice as many winners, 64, as unforced errors, 27.

Kyrgios delivered 25 aces and some memorable moments -- including walking out on court and warming up for the match in a No. 8 Los Angeles Lakers jersey to honor Kobe Bryant, the five-time NBA champion and 18-time All-Star who died in a helicopter crash Sunday at age 41. 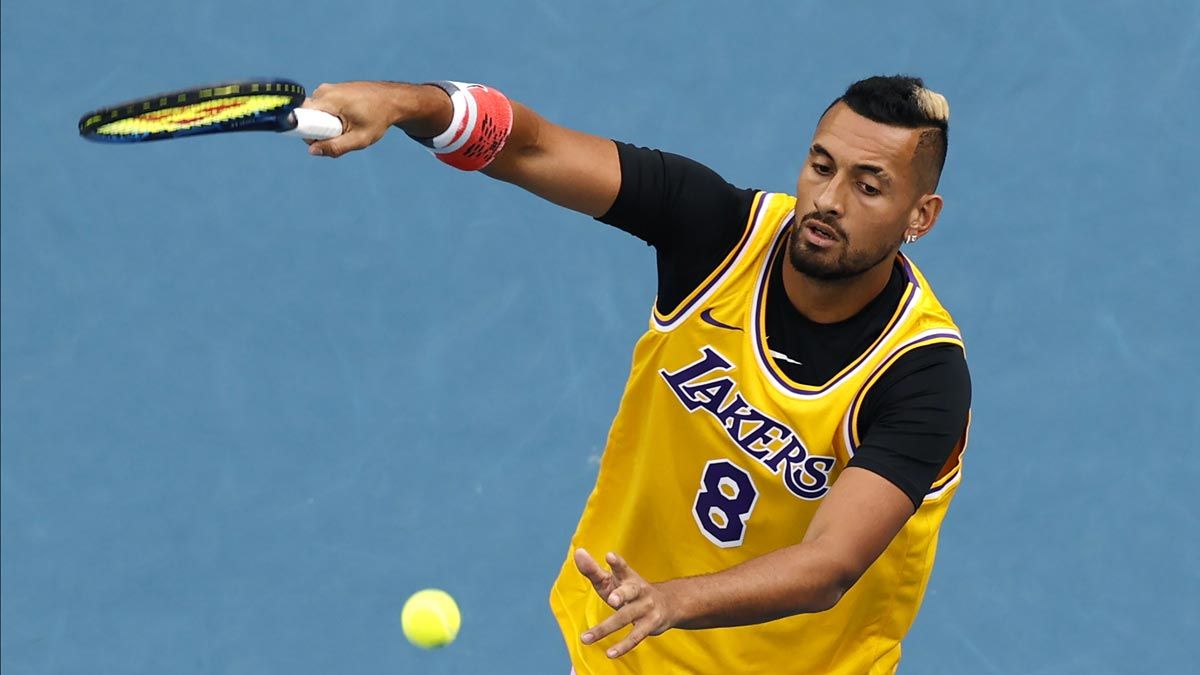 "I wake up this morning with this terrible news. Super sad," Nadal said about Bryant. "He has been one of the greatest sportsmen in history."

A video tribute to Bryant was played on the Rod Laver Arena scoreboards before Monday's match.

On Wednesday, the 33-year-old Nadal's 41st career Grand Slam quarterfinal will be against No. 5 Dominic Thiem in a rematch of the past two French Open finals, both won by Nadal.

The other men's quarterfinal on the top half of the bracket is No. 7 Alexander Zverev vs. No. 15 Stan Wawrinka, who is a three-time major champion, including at the Australian Open in 2014. Tuesday's quarterfinals are defending champion Novak Djokovic against No. 32 Milos Raonic of Canada, and Roger Federer against 100th-ranked Tennys Sandgren of the United States.

There will be a first-time women's champion at Melbourne Park this year, because the last remaining previous winner in the draw, Angelique Kerber, lost to 30th-seeded Anastasia Pavlyuchenkova 6-7 (5), 7-6 (4). Pavlyuchenkova faces Garbiñe Muguruza in the quarterfinals Wednesday, when Simona Halep meets No. 28 Anett Kontaveit.

The match of the day was Nadal vs. Kyrgios, in part because of the quality of the play. There was also this subplot: Put simply, Nadal and Kyrgios do not get along.

They traded verbal barbs through the media last year after Kyrgios beat Nadal at a tournament in Mexico (which is why a spectator kept yelling "Acapulco!" in the stadium Monday). When they met again at Wimbledon in July, Kyrgios ripped a shot right at Nadal's midsection, then refused to apologize.

Kyrgios came into this one following a five-set win that lasted nearly 4½ hours, sapping energy and emotion, and it appeared to affect him in the early going.

Nadal, meanwhile, looked like he was just back from vacation -- some fishing, some golf, some beach time -- and fresh as can be. That spin-filled forehand of his was at its uppercutting best: Nadal accumulated eight forehand winners before Kyrgios managed to produce one.

The first set quickly belonged to Nadal. Yet the entire tenor shifted in the second, which was preceded by a bit of confusion for Nadal. He left two rackets at his sideline seat while he headed to the bathroom after the opening set, telling a ballkid he wanted one re-strung. When Nadal returned, he realized the wrong one had been removed.

The show must go on, though, and Nadal generated three break points in the first game of the second set. Kyrgios erased the first with a 132 mph ace. The second vanished amid some of his typical outrageousness: Kyrgios chased down a lob and, back to the net, flicked the ball through his legs to prolong a point that ended when he bashed a forehand that forced an error. He took care of the third in a more traditional manner.

And then, 63 minutes in, Kyrgios earned his first break opportunity and used it for a 3-1 lead with a squash forehand passing shot that Nadal let float by. The ball landed on the back of the baseline and Kyrgios marked the occasion with a leap and a fist in the air.

Soon enough, it was a set apiece, and Kyrgios was strutting to the sideline with a towel dangling from his teeth.

Truthfully, Kyrgios should be "Mic'd Up" every time he plays, and his patter was strong on this cool, breezy evening, whether he was complimenting Nadal with "Too good!" or admonishing his entourage to "Say something!" or sarcastically criticizing himself by shouting "Well done!" after a bad backhand.

After another mistake, Kyrgios yelled, "Come on, Nick!" and smacked himself in the forehead with his racket strings.

There was more, too. He complained about a line judge who he thought was laughing at him. And he was warned for racket abuse after destroying one by spiking it after flubbing a shot in the third-set tiebreaker. The way the fourth set ended probably angered Kyrgios, too, but he quickly packed up his things and left.