Peng Shuai tells Olympic officials she is safe and well

BEIJING — Missing Chinese tennis star Peng Shuai told Olympic officials in a video call from Beijing that she was safe and well, the International Olympic Committee said on Sunday after Peng reappeared in public at a youth tournament in Beijing, according to photos released by the organizer.

The 30-minute call came amid growing global alarm over Peng after she accused a former leading Communist Party official of sexual assault. China's ruling Communist Party has tried to quell fears abroad while suppressing information in China about Peng.

Peng "thanked the IOC for its concern about her well-being," the Switzerland-based Olympic body said in a statement.

"She explained that she is safe and well, living at her home in Beijing, but would like to have her privacy respected at this time. That is why she prefers to spend her time with friends and family right now," the statement said.

Peng, who played for China at three Olympics from 2008 to 2016, made the sexual assault allegation on Chinese social media three weeks ago against a former member of the Communist Party's ruling Standing Committee, Zhang Gaoli.

That post was removed within minutes and the former top-ranked doubles player went missing from public view. She did not respond publicly to calls for information to show she was safe.

Peng adds to a growing number of Chinese businesspeople, activists and ordinary people who have disappeared in recent years after criticizing party figures or in crackdowns on corruption or pro-democracy and labor rights campaigns.

Some reemerge weeks or months later without explanation, suggesting they are warned not to disclose they were detained or the reason.

Bach, the IOC president, has invited Peng to join him at a dinner when he arrives in Beijing in January "which she gladly accepted," the IOC said Sunday. Terho and Li were also invited.

"I was relieved to see that Peng Shuai was doing fine, which was our main concern," Terho said in the IOC statement. The hockey player from Finland represents athletes on the IOC executive board.

"She appeared to be relaxed," Terho said. "I offered her our support and to stay in touch at any time of her convenience, which she obviously appreciated."

The photos of Peng posted Sunday by the China Open on the Weibo social media service made no mention of her disappearance or her accusation. The former Wimbledon champion was shown standing beside a court, waving and signing oversize commemorative tennis balls for children.

Peng's disappearance and official silence in response to appeals for information prompted calls for a boycott of the Winter Olympics in Beijing in February, a prestige event for the Communist Party. The women's professional tour threatened to pull events out of China unless the safety of the former No. 1 doubles player was assured.

The IOC had previously remained quiet about the status of Peng, helping to contribute to the IOC's multimillion-dollar revenue from broadcasting and sponsorships.

The Olympic body's stated policy is "quiet diplomacy." The IOC had said Saturday it would "continue our open dialogue on all levels with the Olympic movement in China."

Discussion of Peng's accusation has been deleted from websites in China. A government spokesman on Friday denied knowing about the outcry. The ruling party's internet filters also block most people in China from seeing other social media abroad and most global news outlets. 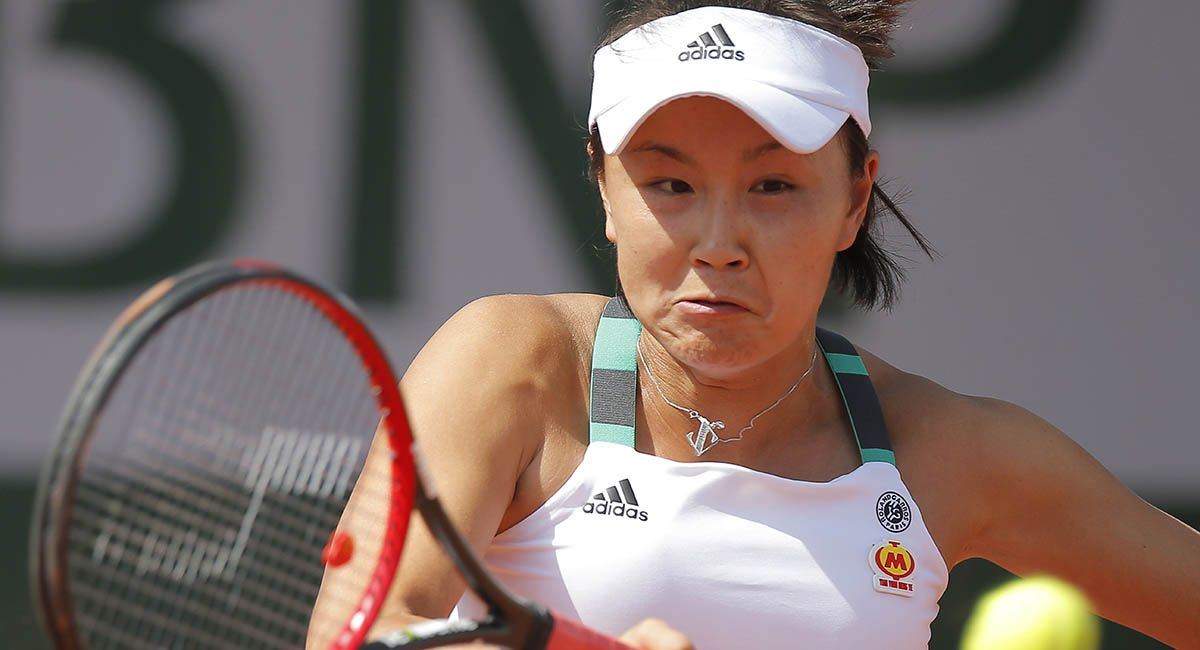 Peng Shuai adds to a growing number of Chinese businesspeople, activists and ordinary people who have disappeared in recent years after criticizing party figures or in crackdowns on corruption or pro-democracy and labor rights campaigns.

Comments on Chinese social media on Sunday criticized the Women's Tennis Association and others who spoke up about Peng. Comments in Chinese on Twitter poked fun at the awkward release of photos and video of Peng by employees of state media this weekend while the government stayed silent.

"When will the WTA get out of China?" said a comment on the Sina Weibo social media service, signed "Sleep Time."

Peng's appearance Sunday was mentioned in the final sentence of a report about the tournament on the website of the English-language Global Times, a newspaper published by the ruling party and aimed at foreign readers, but not immediately reported by other media within China.

The Global Times editor, Hu Xijin, said Saturday on Twitter, which can't be seen by most internet users in China, that Peng "stayed in her own home freely" and would "show up in public" soon.

The Global Times is known for its nationalistic tone. Hu uses his Twitter account to criticize foreign governments and point out social and economic problems abroad.

A comment on Twitter signed bobzhang999 said, "Hu Dog, with so many photos, why don't you let Peng Shuai talk?"

Tennis stars and the WTA have been unusually vocal in demanding information about Peng. Other companies and sports groups are reluctant to confront Beijing for fear of losing access to the Chinese market or other retaliation.

The ruling party has given no indication whether it is investigating Peng's accusation against Gao, 75, who left the Communist Party's ruling Standing Committee in 2018 and has largely disappeared from public life.

Even if Peng's accusation is deemed valid, people in China often are jailed or face other penalties for embarrassing the party by publicizing complaints about abuses instead of going through the secretive, often unresponsive official system.

The status of star athletes such as Peng is especially sensitive. State media celebrate their victories as proof the party is making China strong. But the party is vigilant about making sure they cannot use their prominence and public appeal to erode its image.

Steve Simon, the WTA's chairman and CEO, expressed concern for Peng's safety after Hu, the newspaper editor, posted two videos Saturday that appeared to show her in a restaurant.

"While it is positive to see her, it remains unclear if she is free and able to make decisions and take actions on her own, without coercion or external interference. This video alone is insufficient," Simon said. "Our relationship with China is at a crossroads."

The IOC said Saturday it would "continue our open dialogue on all levels with the Olympic movement in China."

Asked two weeks ago about human rights in China, senior IOC member Juan Antonio Samaranch said "we are not discussing with the Chinese government anything" about that subject.

The IOC has previously said its partner in organizing the Winter Games is the local organizing committee, not the Chinese state. That committee is controlled by the Communist Party.

Emma Terho, the newly elected head of the IOC's Athletes' Commission that is charged with representing the interests of Olympic athletes, said in a statement Saturday "we support the quiet diplomacy" approach favored by the IOC.

Last week, the foreign arm of state TV issued a statement in English attributed to Peng that retracted her accusation against Zhang. The WTA's Simon questioned its legitimacy while others said it only increased their concern about her safety.