NEW YORK — Dominic Thiem was talking about himself and the rest of the men in the U.S. Open semifinals, but he might as well have been offering advice to tennis fans the world over.

"Once we step on the court," Thiem said, "the other three are forgotten anyway."

Those "other three" are far better known as the so-called Big Three of men's tennis — Roger Federer, Rafael Nadal and Novak Djokovic — none of whom will be anywhere near Arthur Ashe Stadium on Friday when it hosts No. 2 seed Thiem of Austria vs. No. 3 Daniil Medvedev of Russia, and No. 5 Alexander Zverev of Germany vs. No. 20 Pablo Carreño Busta of Spain for the right to participate in the final.

None of the men left has won a Grand Slam championship; the last first-time Slam winner was Marin Cilic at the 2014 U.S. Open.

"Every single one of us deserves this first major title. Everybody will give it all," Thiem said. "That's what's on the mind."

The eventual champion will be the first man born in the 1990s to grab a Grand Slam trophy: Zverev is 23, Medvedev is 24, Thiem turned 27 a week ago, and Carreño Busta is 29.

Federer, Nadal and Djokovic simply have not left room for other folks. They won the past 13 Grand Slam titles and 56 of the last 67; this is the first Slam since 2004 without at least one of them in the semifinals. 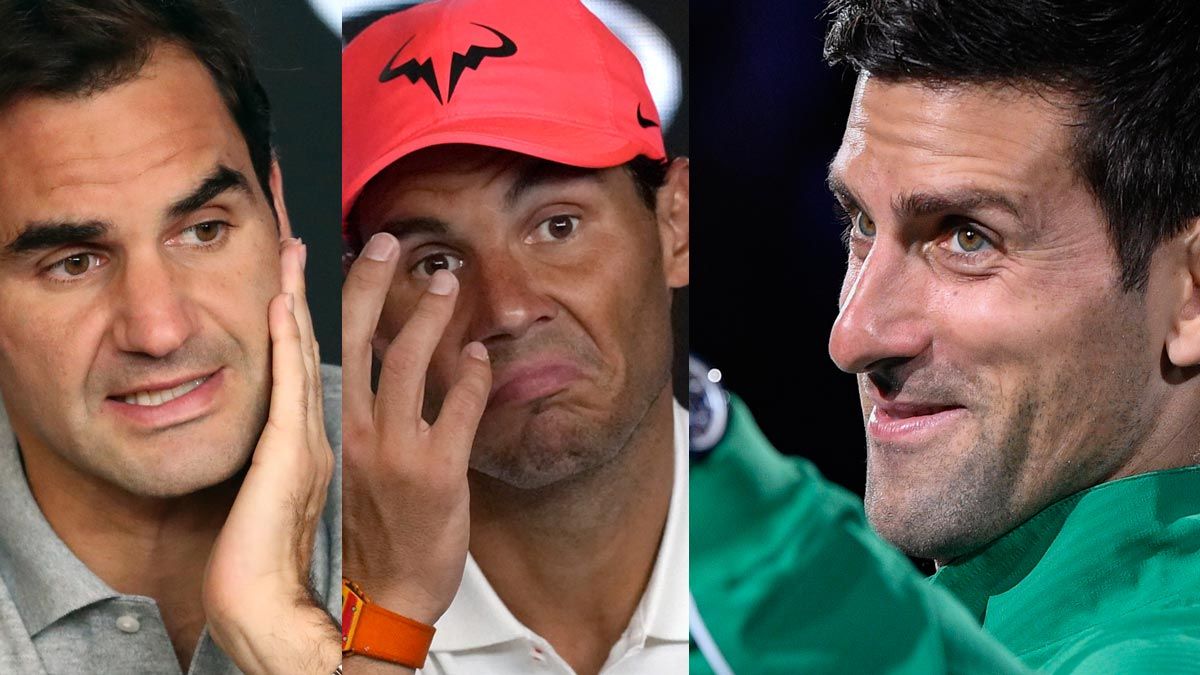 It took quite a confluence of events for that to happen.

Federer is sidelined for the rest of 2020 after two operations on his right knee; Nadal cited concerns about international travel amid a pandemic for deciding not to try to defend his 2019 championship in New York; Djokovic was disqualified from his fourth-round match against Carreño Busta for accidentally hitting a line judge in the throat with a ball while walking to the sideline after dropping a game.

"The Novak news shocked us all. And obviously for us younger guys, we see that as a massive opportunity," said Zverev, who made his Grand Slam semifinal debut at this year's Australian Open and now is in his second in a row. "But we have to put our head down and just do our job and focus on ourselves."

Either he or Carreño Busta, also a semifinalist at Flushing Meadows in 2017, will reach his initial Slam final.

The semifinal that will draw more attention is Medvedev vs. Thiem. Both have reached major finals before — and always run into Nadal or Djokovic.

Medvedev was the runner-up to Nadal at last year's U.S. Open in a five-set, four-plus-hours thriller. Thiem is 0-3 in major title matches, losing to Nadal at each of the past two French Opens and to Djokovic at the Australian Open in February.

It will be intriguing to watch Medvedev's serving against Thiem's returning.

Asked about Thiem, Medvedev offered this appraisal: "Very aggressive. Tries to take everything with his forehand. Goes for it. Doesn't ask questions."

And Thiem's take on Medvedev: "I would say that he comes very close to the Big Three players, in terms (of) that he can play his level, his top level, for doesn't matter how long -- I mean, four, five, six hours. That's going to be really, really difficult."

Makes sense, really, that the highest form of praise Thiem could think of was comparing Medvedev to Federer, Nadal and Djokovic.