MELBOURNE, Australia — Love him or hate him -- and make no mistake, there are plenty in each camp -- Nick Kyrgios never allows for a dull moment when he's on a tennis court, whether it's shot selection, showmanship, momentum swings, barking at his entourage or mocking another player not even involved in the match at hand.

All of the above happened during his ever-eventful 6-2, 6-4, 4-6, 7-5 victory over Gilles Simon in the Australian Open's second round Thursday night.

That included a moment when Kyrgios — currently on six months' probation from the ATP for verbally abusing tennis officials — poked fun at the man he might meet in the fourth round, Rafael Nadal. After being warned for taking more than the allotted 25 seconds between serves, Kyrgios mimicked how Nadal fidgets before a point, as if to remind the chair umpire that there are folks who more egregiously waste time.

When a reporter asked Nadal about Kyrgios' imitation of the 19-time major champion, the Spaniard replied: "I really don't care. I'm here to play tennis."

About the only boring segment of the proceedings came during the in-stadium interview, when an allusion was made to later rounds and Kyrgios, an Australian seeded 23rd, told the Melbourne Arena crowd, "I'm not thinking ahead. ... I'm just taking it one match at a time at the moment."

After Kyrgios wrapped up, the No. 1-seeded Nadal was still in the early stages of what became a 6-3, 7-6 (4), 6-1 win against Federico Delbonis over at Rod Laver Arena.

Those results were the most intriguing of Day 4 at the year's first Grand Slam tournament, especially given the distaste Kyrgios and Nadal have for each other in a raucous rivalry that provided one of the highlights of Wimbledon in 2019.

Never too early to begin pondering a meeting with a quarterfinal berth at stake during Week 2 in Melbourne, with the popular Nadal facing the home-backed Kyrgios. 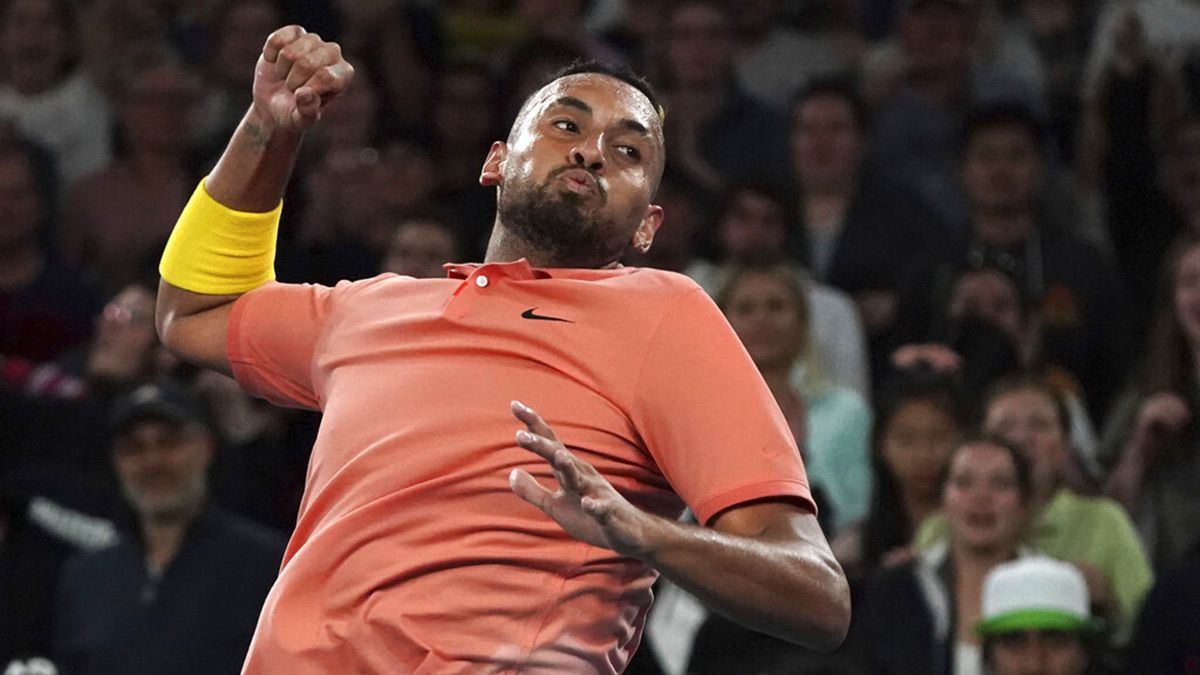 For that to materialize, Kyrgios first needs to beat No. 16 Karen Khachanov of Russia on Saturday, when Nadal plays No. 27 Pablo Carreno Busta in an all-Spanish matchup.

A massive overnight storm blew dirt all over town, turning the Yarra River brown and leaving traces of red dust on the blue courts Thursday. The playing surfaces required power washing, which delayed the start of action on some outside courts for more than four hours.

Among the noteworthy winners were U.S. Open runner-up Daniil Medvedev, who took a medical timeout because of a nosebleed late in the second set of his 7-5, 6-1, 6-3 victory over Spanish qualifier Pedro Martinez, along with two-time French Open finalist Dominic Thiem, No. 7 Alexander Zverev, No. 10 Gael Monfils and a trio of women who have been ranked No. 1 and own Grand Slam titles: Simona Halep, Angelique Kerber and Garbiñe Muguruza.

Nothing captivated a crowd quite like Kyrgios did against Simon, a 35-year-old from France who is ranked 61st.

Not all for good reasons, though.

Yes, Kyrgios delighted the fans with his between-the-legs shots and his booming serves -- to the tune of 28 aces, including one at 136 mph to end the match.

He also probably made them nervous with the way he seemed to completely give away the third set after twice being a single point from serving for the win, holding break chances while already leading 4-2. Kyrgios dropped the last four games of that set, no longer showing the patience in baseline exchanges that helped build a lead in the first place.

There also were the consecutive double-faults that allowed Simon to get to 4-all with his first break of the match.

That was part of a stretch in which Kyrgios veered off course for quite a while. The talented 24-year-old went from a total of 10 unforced errors over the first couple of sets to 30 over the next two.

Kyrgios later described himself with a vulgar term for that reaction and said he apologized to his entourage in the locker room.

"They don't deserve that. They do a lot of things for me, on and off the court," he said. "No, it's not acceptable from me. Nothing to do with them."

Eventually, he got himself headed back in the right direction, earning break points at 5-all in the fourth with the help of an unnecessary leaping backhand that seemed to fly out of control yet somehow landed on the baseline. Kyrgios got that key break with a forehand winner to lead 6-5, then extended his arm toward the spectators.

Then he turned toward the stands behind the baseline and let out a roar.

"Could have gone to a dark place, and I brought it back. I somehow scraped the win," Kyrgios said later. "Maturity? I don't know. I'm just happy to get the win."