SO here's a dose of realism — or surrealism — for the first video game tournament of the coronavirus pandemic involving professional tennis players: A match supposedly was postponed on Monday because of Rafael Nadal's balky back, except the tournament director later admitted he was just kidding.

That bit of silliness from Day 1 at the controller-instead-of-racket Madrid Open came 24 hours after another pro, Gael Monfils, really did withdraw because of ties to a streaming service not involved in this virtual venture.

Add those bizarre developments to technical glitches, some odd announcing and plenty of enthusiasm from the participants — including a particularly creative Belinda Bencic, the 2019 US Open semifinalist who posted a video of herself entering a living room to the strains of "I Love Rock 'n' Roll" — as tennis joined the move to gaming for a sports world largely on hold during the COVID-19 outbreak.

"I don't know when it's going to be over, this nightmare, because it's been really long already, and it feels like it's never going to be over," said Feliciano Lopez, a pro who's been ranked in the top 20 in singles and doubles and now oversees the Madrid Open.

The real clay-court tuneup for the French Open was supposed to be played May 1-10. But it is among more than 30 tournaments canceled or postponed because tennis tours are suspended until at least mid-July. Wimbledon was called off for the first time in 75 years. 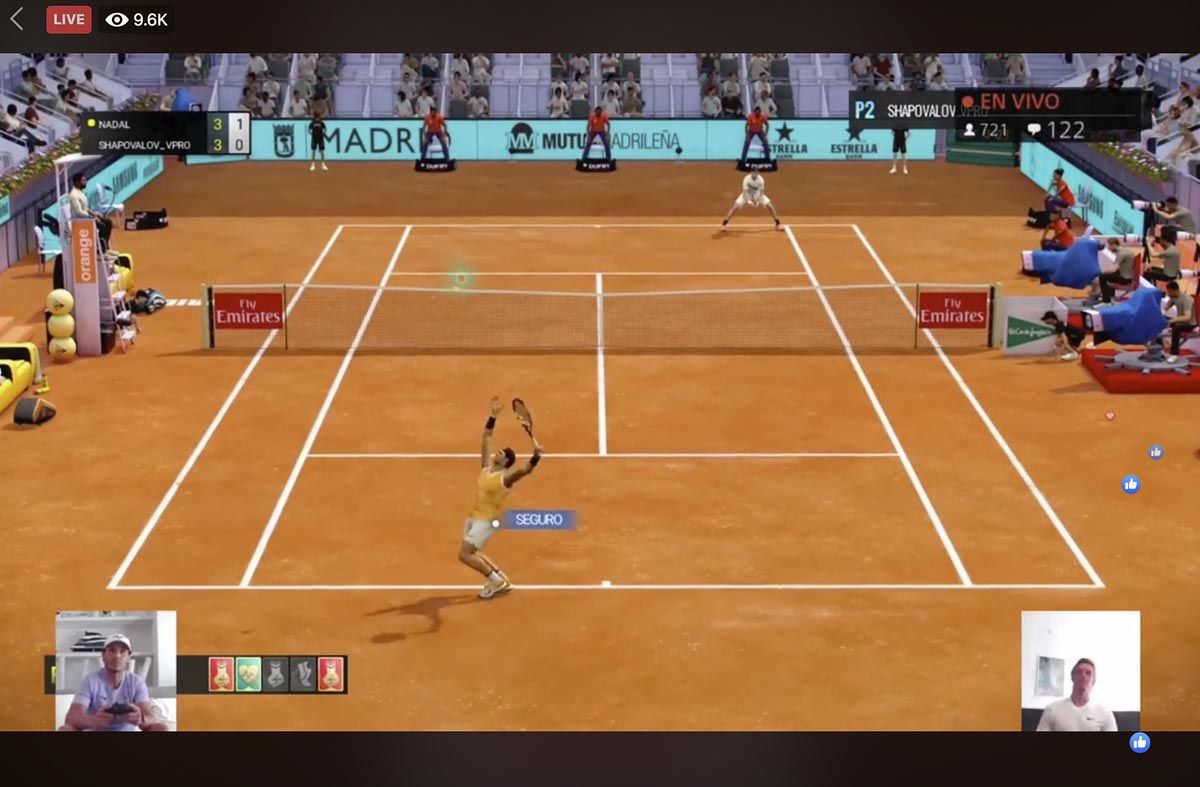 "The first thing when we started working on this project was to give the fans something that they don't have right now," Lopez said.

It was Lopez who earnestly (well, seemingly earnestly) said Monday he got a text from Nadal explaining "he was really worried about the injury" to his back and wanted to put off a match. There was zero indication at the time that this was an attempt at humor.

But later, Lopez wrote on Twitter: "Guys, I was joking of, course."

There are 16 women and 16 men in the four-day pretend Madrid event, including 19-time Grand Slam champion Nadal, three-time major winner Andy Murray and former No. 1 women Caroline Wozniacki — who retired from the tour in January — Angelique Kerber and Karolina Pliskova. A combined €300,000 (about US$325,000) in prize money is available, with the champs deciding how much to donate to tennis players having a hard time financially now. An additional €50,000 (about US$55,000) is going to virus-related charity.

There's a round-robin format, with one-set matches up to just 3 games, and tiebreakers at 3-all. Each match lasts about 10 minutes.

Viewers can watch streams available with English and Spanish commentary, which sometimes drowns out the players, who can be seen and heard via picture-in-picture boxes.

Diego Schwartzman, who won twice Monday, acknowledged practicing "for a few days" — and also acknowledged that "I'm not really good at this game."

The No. 8-ranked Bencic provided the highlight. The 23-year-old from Switzerland walked up a stairway decked out full tennis regalia, replete with a white visor, and lugged a racket bag that she unzipped to grab a game controller.

There were some hiccups with Monday's stream, interrupting matches or interviews.

"It was a little bit 'laggy' on my side," said Shapovalov, a 21-year-old from Canada currently ranked 16th. "It seemed like the internet wasn't great."

A minute or so into Friday's tournament draw, a co-host on the English feed apologized after sitting around in silence. There were more apologies from that day's announcers, including for not knowing how to pronounce players' names properly — not even close on some — and for not really knowing much at all about real professional tennis.

Then again, none of this has anything at all to do with real tennis, of course.