BELGRADE, Serbia — Novak Djokovic could be barred from the French Open later this year because he’s not vaccinated against COVID-19, a possibility that raised the stakes for the tennis star just hours after he was deported from Australia and prevented from defending his Australian Open title.

A plane carrying the No. 1-ranked player touched down in his native Serbia on Monday, closing at least the first chapter in a dizzying drama that has resonance in the world of elite sports, Australian pandemic politics and the polarized debate over the coronavirus shots.

Djokovic was expected to receive a hero’s welcome from his countrymen, many of whom think he was unfairly treated in Australia. But only handful of fans waving the Serbian flag greeted him at the airport in the capital, Belgrade.

At the same time, clouds gathered over what would come next for the player: French officials said a new law requiring vaccination to enter sports venues would have no exceptions. Much could change between now and the start of the French Open, which is the next Grand Slam, in late May. But that raised the possibility the recent saga in Australia would be not just a blip but an ongoing challenge for the unvaccinated athlete, who is increasingly being held up as a hero by the anti-vaccine movement.

Djokovic had argued that he was exempt from strict Australian vaccination rules because he had recently recovered from COVID-19. But once he arrived in the country, Australian authorities said that exemption wasn't valid. They eventually cited the public interest and revoked his visa, saying his presence could stir up anti-vaccine sentiment and that kicking him out was necessary to keep Australians safe. 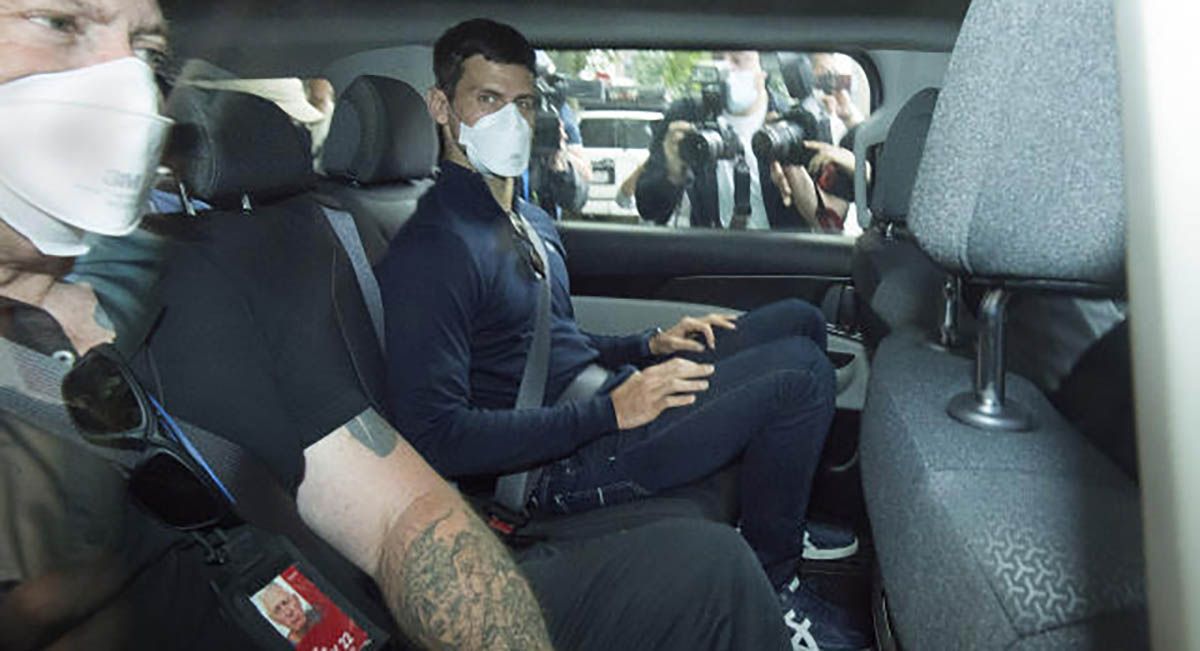 As he flew home from Australia, a member of the French Parliament added a new twist. Christophe Castaner said a new law that will exclude unvaccinated people from sports venues, restaurants and other public places will apply anyone who wants to play in the French Open — a reversal of plans to create a “bubble” around the tournament.

France’s sports ministry said Monday once the new law is in place, there will be no exceptions until further notice.

For now, a warm welcome awaits Djokovic, who has overwhelming support in his native Serbia where his closest family lives. Serbian President Aleksandar Vucic has accused the Australian government of “harassing” the top-ranked tennis star and urged him to return home.

“God bless you Novak," read one of the banners held by the fans at the airport as he whisked through the passport control and customs and then driven by his brother Djordje to his apartment in Belgrade.

The legal battle over whether Djokovic held a valid exemption to vaccine rules that would allow him to play in the Australian Open ended Sunday with his deportation.

Vaccination amid the pandemic is a requirement for anyone at the Australian Open, which started Monday in Melbourne. Djokovic has won nine titles there previously. He had hoped this year to win his 21st Grand Slam singles trophy there, breaking the record he shares with rivals Roger Federer and Rafael Nadal for the most in the history of men’s tennis. Federer is not playing while recovering from injury, but Nadal is competing.

More than 95% of all Top 100 men and women in their tours’ respective rankings are vaccinated. At least two other men — American Tennys Sandgren and Frenchman Pierre-Hugues Herbert — skipped the first major tournament of the year due to the vaccine requirement.

Djokovic’s attempt to get the medical exemption for not being vaccinated sparked anger in Australia, where strict lockdowns in cities and curbs on international travel have been employed to try to control the spread of the coronavirus since the pandemic began.

Djokovic tested positive in Belgrade on Dec. 16, but received the result late Dec. 17, he said, and scrapped all his commitments except a long-standing interview with L'Equipe newspaper the following day. He later described this “an error” of judgment.

Asked if Djokovic would face any penalties for flouting his isolation while being infected when he returns to Serbia, Serbian officials said he would not because the country is not in a state of emergency.

Djokovic has almost an iconic status in Serbia, whose president had called the court hearing in Australia “a farce with a lot of lies.”

“Novak, welcome home, you know that we all support you here,” said Snezana Jankovic, a Belgrade resident. “They can take away your visa, but they cannot take away your Serbian pride.”