AFTER a six-year hiatus, the Sofitel Manila Half Marathon makes a comeback that is hoped to lead to bigger things.

The 2014 run will feature 5k, 10k and 21k categories, and will be held at the Mall of Asia grounds on August 17. The race is a collaboration between the Sofitel Philippine Plaza and Runrio, the premier running event organizer in the country.

“The Sofitel Manila Half Marathon aims to be at par with other international marathons such as the Boston Marathon or Singapore Marathon,” said Sofitel Philippine Plaza general manager Adam Laker, adding the race could pave the way for a possible full marathon.

This was confirmed by running coach and organizer Rio dela Cruz who said the 21K can serve as a fitting preparation for both amateurs and professionals for a planned Manila International Marathon next year.

The race is open to 6,000 runners - available slots are 3,500 for 21K, 1,000 in the 10K and 1,500 in the 5K. Dela Cruz said the smaller number of participants is meant for less crowding along the race route and is aimed at imparting a “good experience,” particularly for the 21K runners

Proceeds of the event will contribute to the upliftment of the lives of Manila’s street children through the Virlanie Foundation, the beneficiary of the marathon.

During the press launch, the talented Virlanie Children’s Choir performed acapella renditions of “What a Wonderful World” and “Tagumpay Nating Lahat”.

Last year, Sofitel’s two runs managed to raise P1.5 million – a part of which was used to purchase a van that was handed over to the foundation for their activities.

The 2014 run follows two running events brought about by the Sofitel-Runrio partnership in 2013: The Sofitel Runrio Battle of the Sexes Leg 1 and 2.

Just like the two Battle of the Sexes events, the Manila Half Marathon shall be a green race. Runners are highly encouraged to bring their own water bottles for refilling at hydration stations, instead of using paper and plastic cups.

Cash prizes and luxury prizes from Sofitel are at stake for the top three male and female winners of each category. 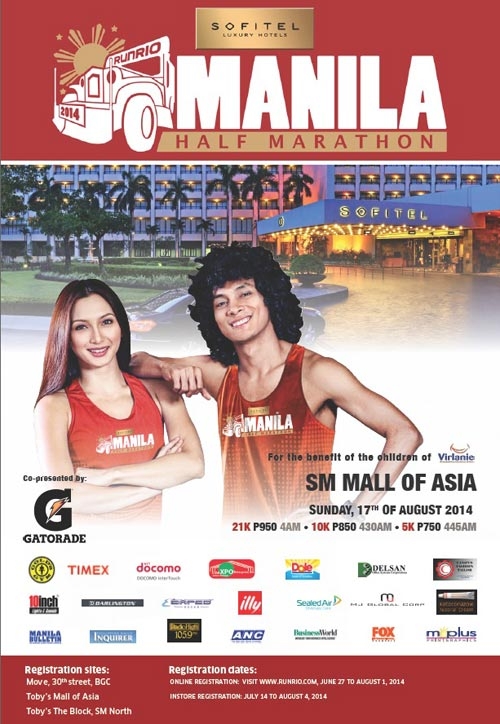