STANDING in front of the gathered duathletes for the race briefing of the inaugural Powerman Duathlon Pilipinas in Balanga, Bataan, race director Thumbie Remigio took exception to a particular group with the following remark: There are a lot of newbies racing tomorrow - what are you all doing here? The crowd reacted with laughter laced with unequal amounts of worry and anticipation.

Anyone who has done a duathlon (run-bike-run) is aware of the pain cave that waits during and after the race; some argue it is tougher than a triathlon of the same distance. And anyone who has done races organized by Mr. Remigio knows that his races are never easy. So this was a race worth doing, and one that pulled me out of my self-imposed multi-sport hiatus since the beginning of the year, to once again test my mettle. I’ll stick to the essentials and try to provide useful input for both future participants and organizers.

My timepiece recorded over the published 10k, the ‘extra mileage with no extra charge’ typical of a number of multi-sport races I have done, but more notoriously present in ultra marathons. As promised, it was a flat course that took us through town streets lined with commercial establishments, in front of the town square, and along open roads and the main highway. The water stations were strategically placed every two kilometers, which did the participants good for hydration, as the sun began to muscle its way through the cluster of early morning clouds. There was also more than enough room to run without any crowding as most runner observed the ‘slow runners to the right, fast runners to the left’ rule; but even without such, one could do carioca run exercises without any possibility of bumping another participant.

Entering and exiting the bike transition is a commute, so it’s good to clip your shoes on the bike and put them on as you mount, or when you’re astride your steed, rather than wear them at your transition spot and walk/run to the mounting area. Same goes for bike-to-run transition: learn/master the flying dismount to save time and the awkward feeling of running to your transition spot on semi-crushed bike legs. 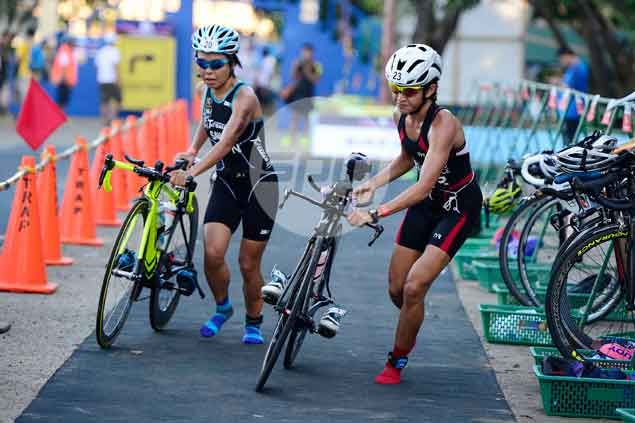 The two-loop bike leg ran along the main highway and the national road, highlighted by a few climbs that saw a number of (suspected newbie) racers dismounting at the steeper portions to push their bikes up the inclines. Technically, the course was not as challenging as riding up Barangay Sampaloc in Tanay, or Teresa in Antipolo. I consider the race inclines short and sweet, and not enough to give the average cyclist any ‘oh, shit’ moments when confronted with consecutive climbing and hairpin turns. Of course, this is coming from someone who has only seen Ambuklao Road in Benguet from the inside of a light SUV. I’ll be sure to prep for that one.

The weather at that point was still forgiving, which made the bike ride pleasant enough to go on occasional surges and recover adequately between ascents. And what goes up must come down, so the descents were also welcome on the back end of each loop. I found quite annoying the five consecutive (and not at all smooth, mind you) road bumps early into the ride, which slowed momentum entering a stretch of the national road. A dog with a death wish crossed my path TWICE along the course, and all town folk could muster was a hearty laugh or a unhelpful, reprimanding ‘Hoy, alis diyan! (Hey, get outta the way!)’

Although one side of the main highway was clearly closed to vehicular traffic through the use of traffic poles and tape, some portions proved a bit unwieldy after some of the tape came undone, flapping and tossing in the wind. This compelled racers to ride further to the left, which might have posed some hazards to oncoming racers from the opposite side. I did see some mobile race marshals patching up the tape, while others removed the tape outright.

The lone aid station at the 15 km U-turn point was sufficient for topping up hydration, and the volunteers were quick to hand cups of cold water, or even pour the same on overheated riders.

Having a short pedestrian overpass from bike-to-run transition onto the main course is a good idea to keep both arriving cyclists and departing runners on a steady, uninterrupted flow of activity; but it doesn’t always bode well for some who are already experiencing muscle tightness and cramps. Me, for instance.

By around the time most participants entered Run 2, the sun was out in full force and beating down hard on Roman Super Highway. The rolling terrain made for a more challenging run route for even the short course racers, while the one kilometer of ‘uphell’ from kilometer four to five leading to the U-turn for those running the 10k claimed more than a few souls and became terrain for the walking dead.

This is where the hydration stations proved their worth. With abundant supplies of cold water, energy drinks, ice soaked sponges, and ice, the five stations that dotted the Run 2 course were lifesavers for runners who were melting in the unusually hot November morning. Side note: I was still hoping to find something more solid to put in my fuel tank other than the gels I had, but maybe the bread and rice cakes were only available at the bike aid station. The aid station volunteers were not only helpful, but also engaged personally, encouraging and cheering runners on to keep fighting and finish the race. 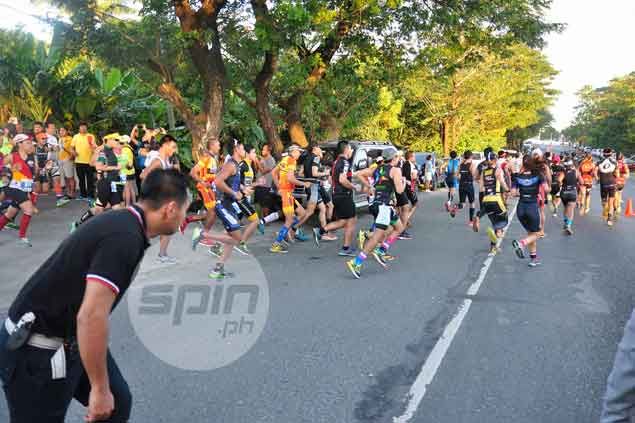 The dash to the finish line arch is a short distance from the turn off the run course, and that made for a great finish. Other races have participants cursing under their breath or screaming at marshals/volunteers in desperation to find the finish line that’s nowhere in sight. This one increases the possibility that you’ll finish the race with a big smile.

In a nutshell, the Powerman Duathlon Pilipinas 2015 is worth the trip, the training, and the tribulation. A lot of newbies may have undergone a rude awakening to the sport that is duathlon at Powerman, but I’m pretty sure that most, if not all, will be back next year to challenge a course that has broken them (in), yet has made them stronger in the process. As for the veteran racers and old hands, this race served as a formidable test for one’s mental tenacity and physical endurance, and stands as another outstanding proving ground for athletic strength and skill.

It’s supposed to be hard… the hard is what makes you great.

Strength doesn’t come from what you do. It comes from overcoming the things you once thought you couldn’t.