OUR Filipino athletes who brought home precious medals from the Tokyo Olympics may have been the talk of the town in 2021.

But their compatriots who fell short of wearing those coveted prizes on their necks in Japan also deserve the spotlight.

After all, some of them refused to come home empty-handed as they turned their Tokyo heartbreaks into success in their next tournaments – all contributing to the best year in Philippine sports history.

Caloy Yulo and EJ Obiena are prime examples. The stocky gymnast and lanky pole vaulter failed to live up to great expectations of winning medals in their respective Olympic sports. But both used their disappointments to fuel their drives toward their next stops. 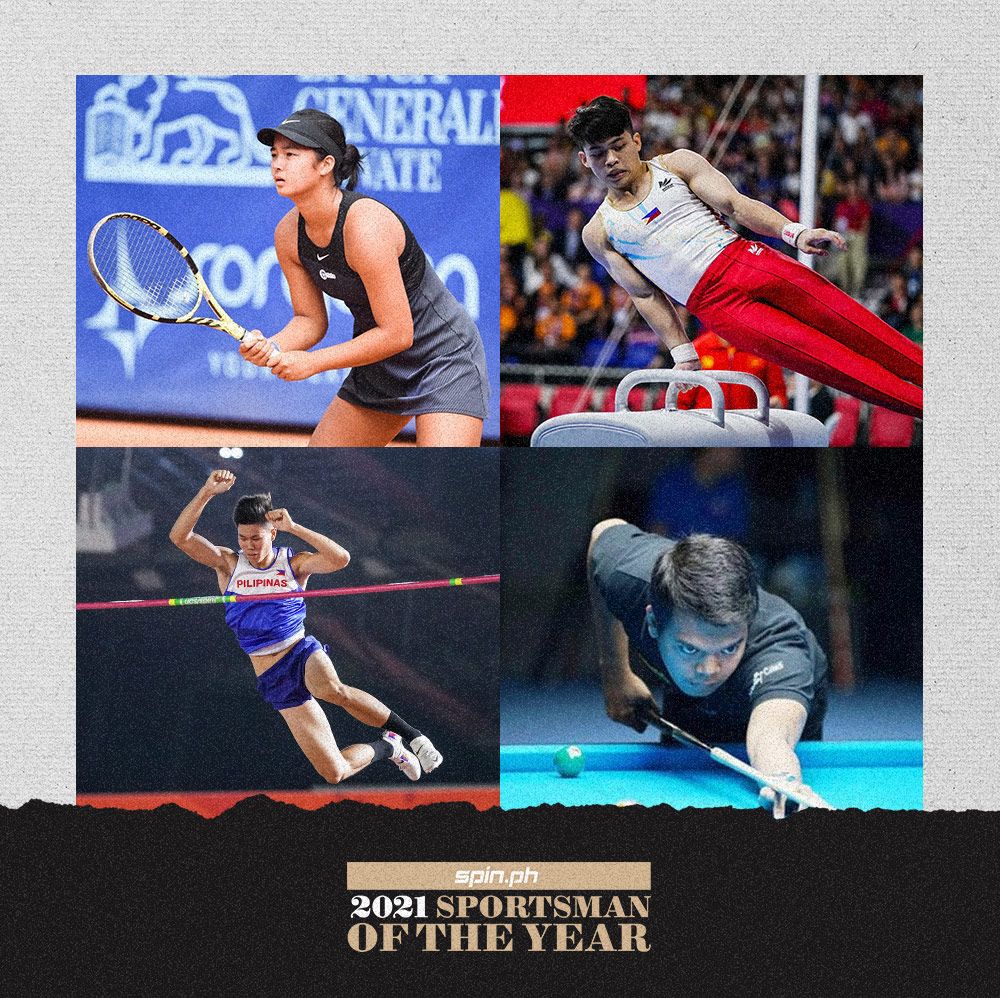 Outside the Olympiad, Carlo Biado and Alex Eala are in the same classification of excelling in the world stage as their victories in billiards and tennis, respectively, have been well-documented.

So by making headlines for their on-court international conquests – and some off-court controversies, the Filipino quartet has been named Newsmakers of the Year as part of our 2021 Spin.ph Sportsman of the Year awards. 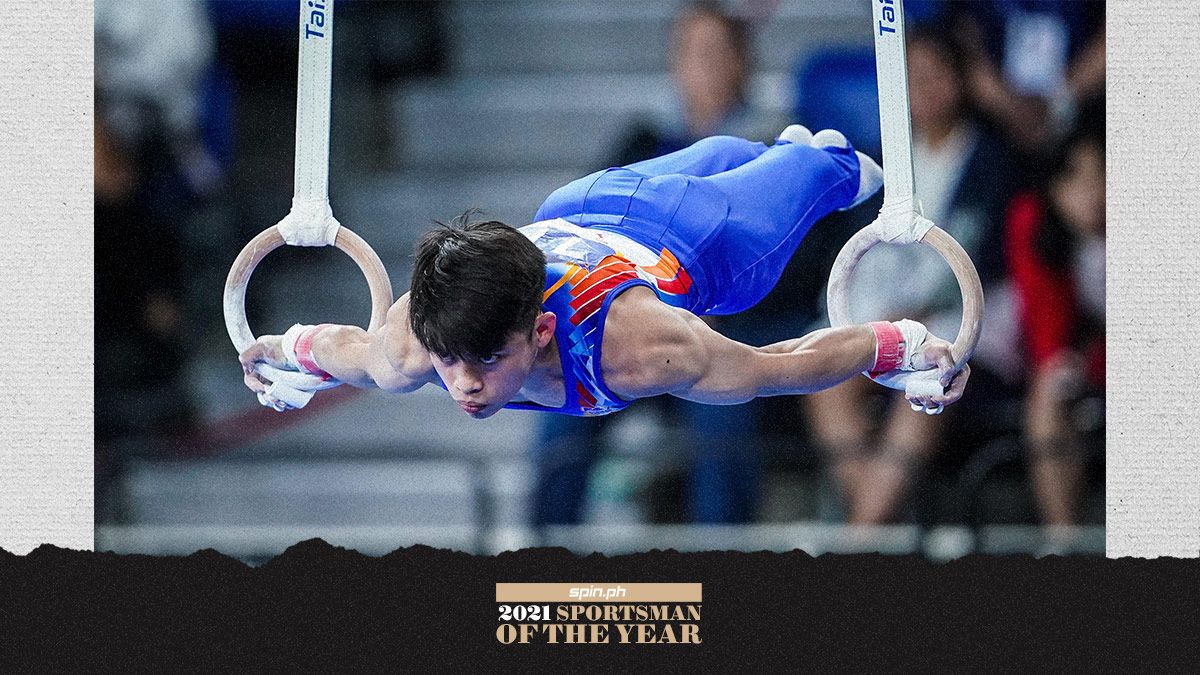 More than Hidilyn Diaz, it was Yulo who was billed as the best bet to win the country’s first Olympic gold medal. But the weight of expectations appeared too heavy on the 21-year-old gymnast’s broad shoulders as he stumbled in his favorite floor exercise event, finishing 44th out of 64.

But after failing to reach the finals of his pet event where he was reigning world champion, Yulo wasted no time to start his comeback. He made a surprise appearance in the vault finals where he fell just short of a podium finish, ending up in fourth spot with 14.176 points from two jumps – just .017 points off the bronze-medal winning score by Armenia’s Artur Davtyan.

It was a sign of even better things to come.

Less than two months after the Olympics, Yulo exorcised his floor exercise demons by ruling his pet event – on top of bagging a bronze medal in the vault – in the All Japan Senior and Masters Gymnastics Championship. 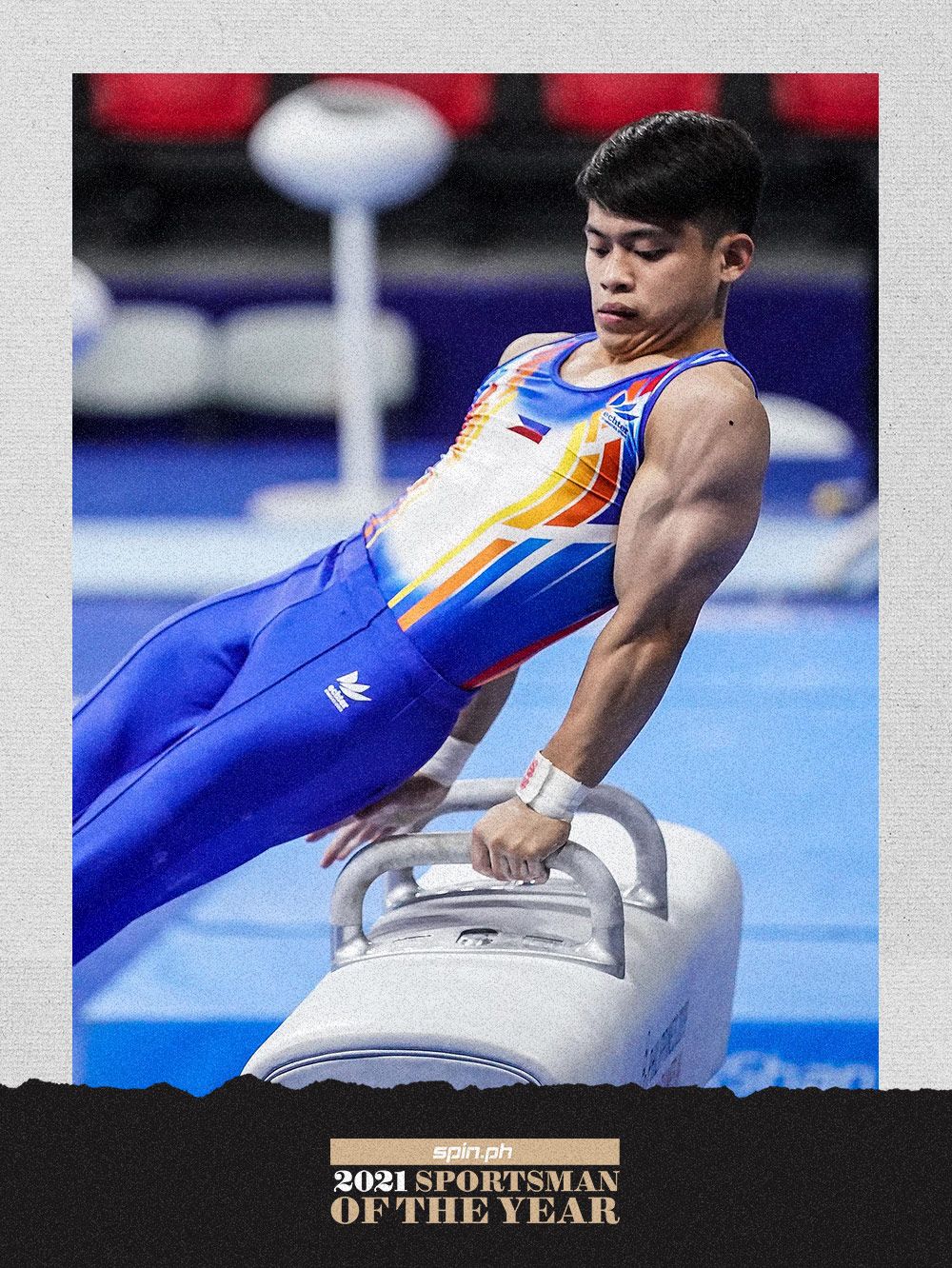 Yulo saved his best for last in late October. Shrugging off an injured elbow, he captured the gold medal in vault at the 50th FIG Artistic Gymnastics World Championships in Kitakyushu, Japan for his second career world title, this time in a different apparatus.

The Manila-born gymnast added a silver medal in the parallel bars to put an exclamation point to his impressive worlds campaign that deserved a P750,000 reward from the Philippine Sports Commission.

Obiena makes news on and off track 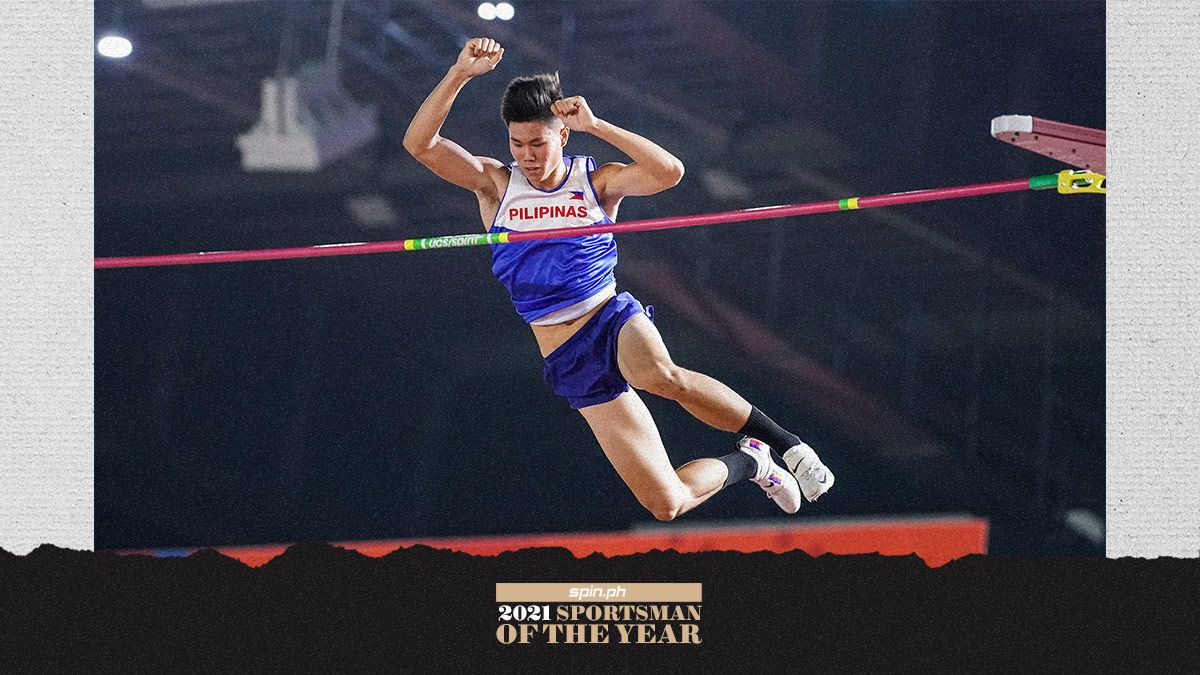 Ranked No. 6 in the world, Obiena was also poised to become the first Filipino to win an Olympic medal in athletics since Miguel White in the 1936 Summer Games in Germany.

The Tondo-born pole vaulter, though, had a shaky qualifying round in Tokyo, needing three attempts to clear 5.75 meters to book a ticket to the finals.

There, he cleared 5.70 meters on his third try, but twice missed 5.80M and aborted his third and final attempt twice over a dispute with officials. Despite winning an appeal that paved the way for a final jump, Obiena still failed to clear the bar.

It was a disappointing result for Obiena, whose personal high was 5.87 meters.

The 25-year-old Obiena finished 11th with a best effort of 5.70M in the event ruled by world record-holder Armand Duplantis on an impressive 6.02M effort. 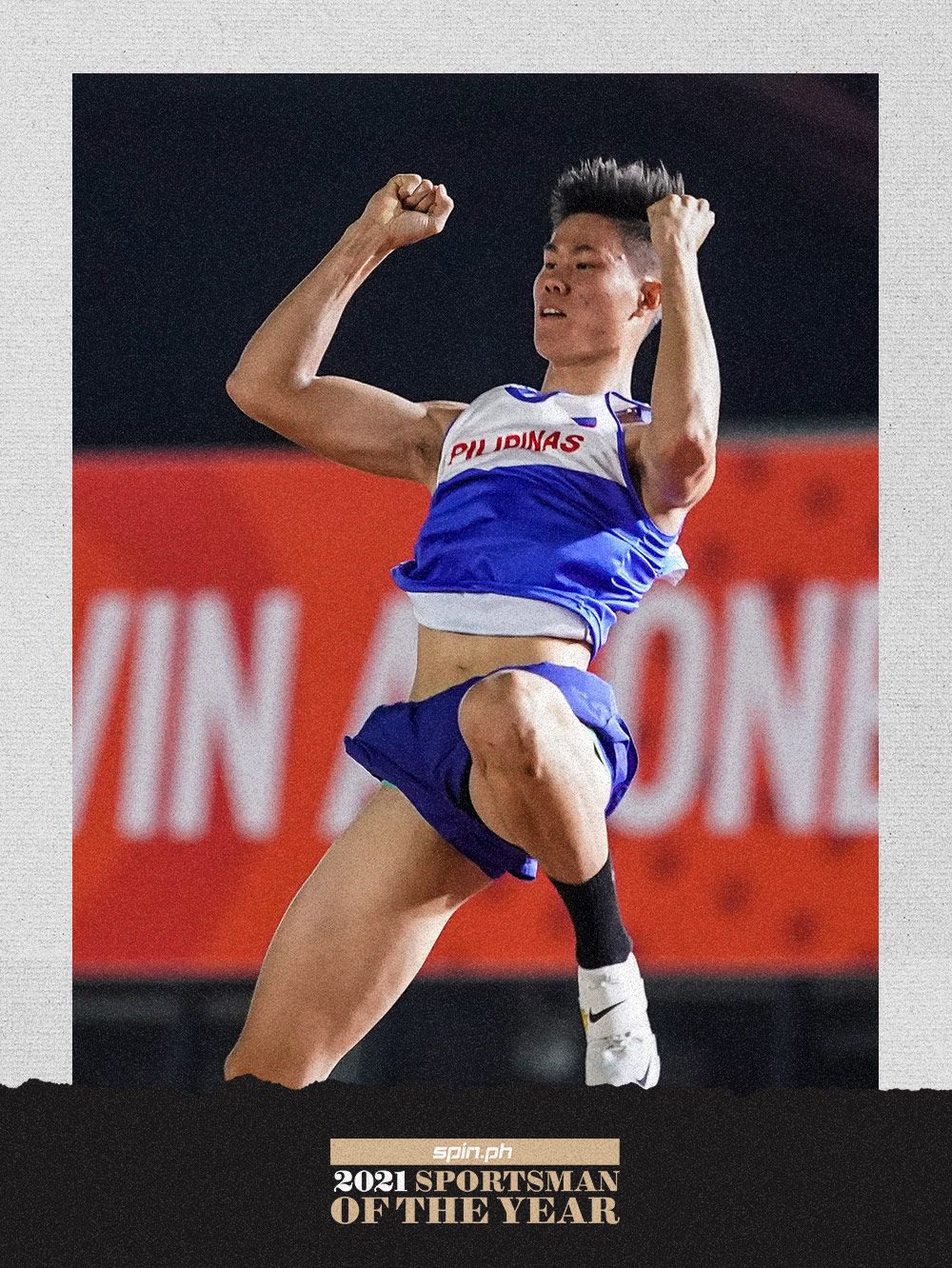 But less than a month after the Olympics, Obiena lived up to his potential as he broke his own Philippine record by clearing 5.91 meters to finish second behind Duplantis in the Meeting de Paris, a competition that’s part of the 2021 Wanda Diamond League.

Oozing with confidence, Obiena sustained his rise in September as he set a new Asian pole vault record by clearing 5.93 meters to rule the International Golden Roof Challenge in Austria.

Obiena surpassed the old mark set by Kazakh Igor Potapovich, who cleared 5.92 for a record that had stood since 1992.

But just as he was tapering off in competitions for the year, Obiena made headlines again – but for the wrong reasons this time.

Obiena was dragged into a messy dispute with his federation, the Philippine Athletics Track and Field Association (Patafa), over the alleged non-payment of salaries of the pole vaulter’s Ukrainian coach in Vitaliy Petrov. 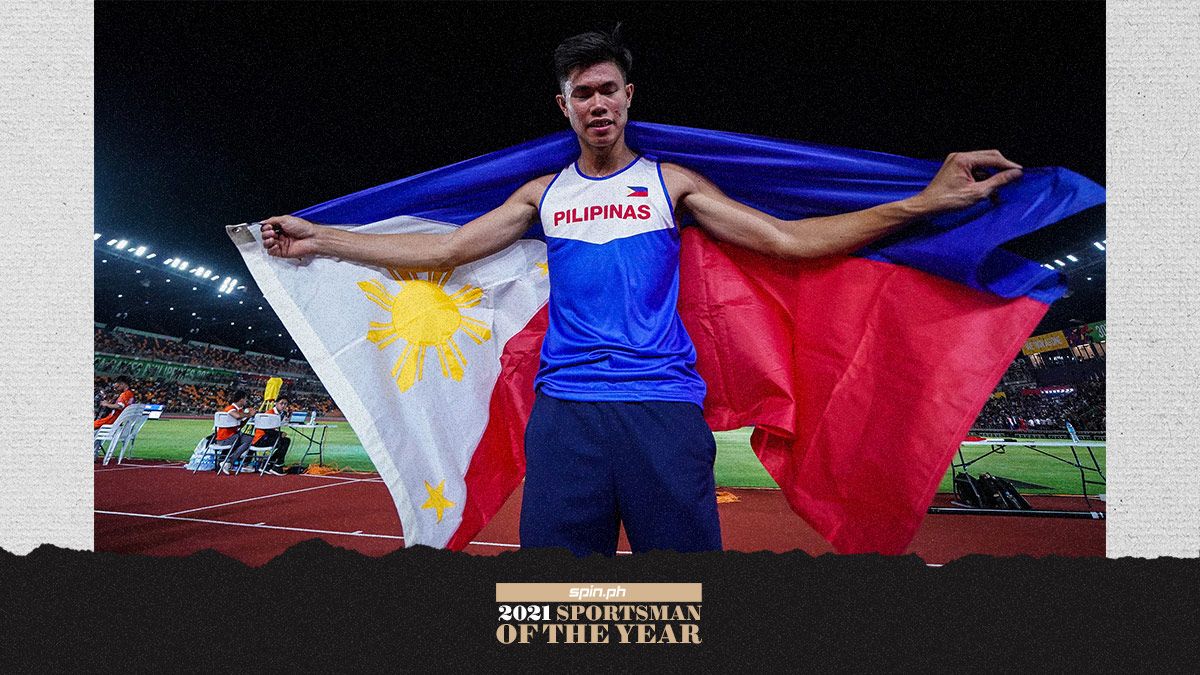 Both camps have aired their sides, with the Philippine Sports Commission, Philippine Olympic Committee, and even the Senate all doing their own investigations into the matter, with the PSC, for a while, acting as mediator between both sides.

Whatever the outcome of the issue should hardly leave a dent to what has been remarkable year for the country’s top athletics bet. 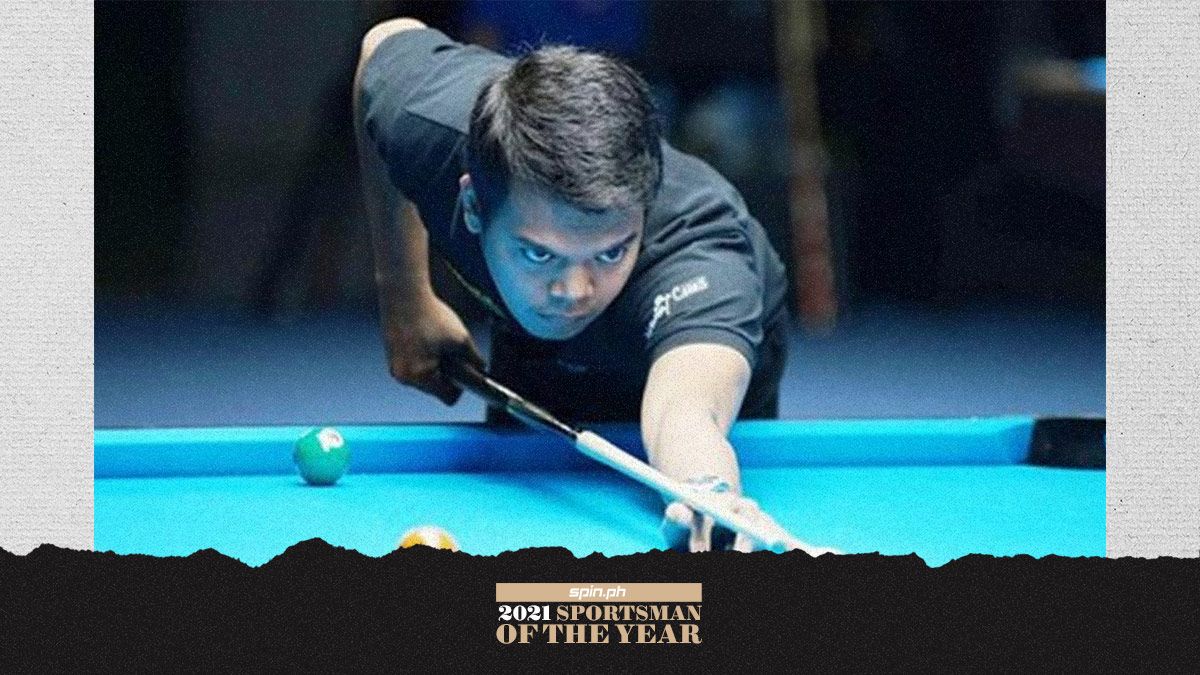 It took a San Juan, La Union native to rule one of the most prestigious tournaments in billiards and spark a renaissance in a sport that Filipinos had seem to have little interest lately.

Relatively quiet at the start of the year, Biado made noise in September when he captured the US Open Pool Championship crown to become the first Filipino since Efren “Bata” Reyes in 1994 to win the competition.

A month before turning 38, Biado gave himself an early birthday present as he emerged as the last Pinoy standing in an Atlantic City, New Jersey field that also had Dennis Orcollo, whose semifinal loss prevented an all-Filipino final.

After warming up his US Open campaign with three convincing wins against Steve Fleming of the US, Canadian Vincent Beaurivage and Mika Immonen of Finland, Biado fell to Spaniard Daniel Alcaide Bermudez, 11-5, in a loss he could afford as he was relegated to the loses’ bracket. 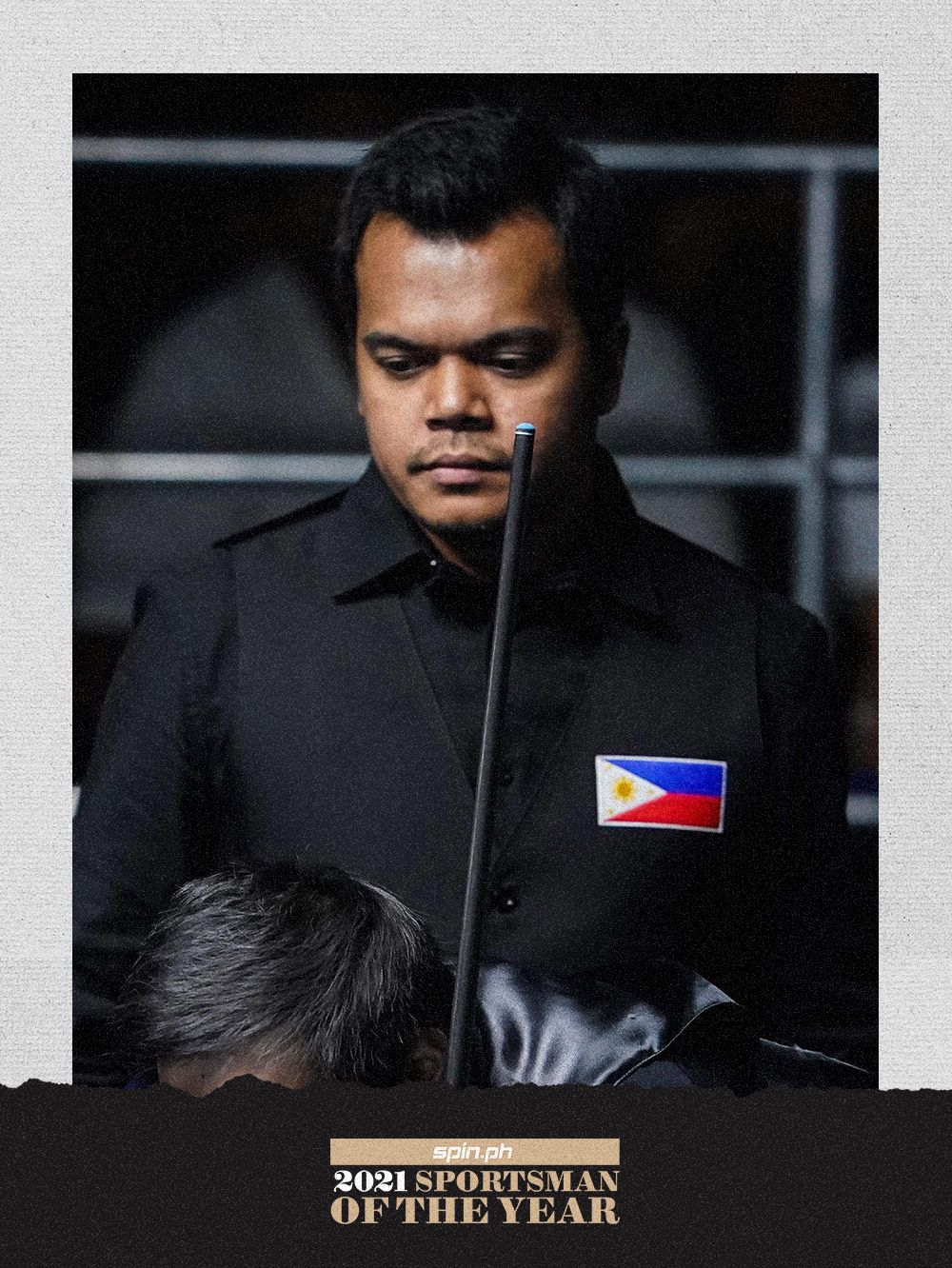 Regaining his groove, Biado then went on to beat Swiss Daniel Schneider, 11-3, compatriot Jeff De Luna, 11-6, and Jayson Shaw of Scotland, 11-8 to reach the knockout rounds. There, Biado finally dispatched Round 4 tormentor Bermudez, 11-10, in the round-of-16 before dispatching compatriot Johann Chua with the same scoreline.

After two battles that went hill-hill, Biado overcame Naoyuki Oi of Japan, 11-9, in the semifinals, to earn a spot in the finale against Aloysius Yapp of Singapore.

Not bad for someone who trained on his own at home after the pandemic lockdown shut down all of the billiard halls in the country. 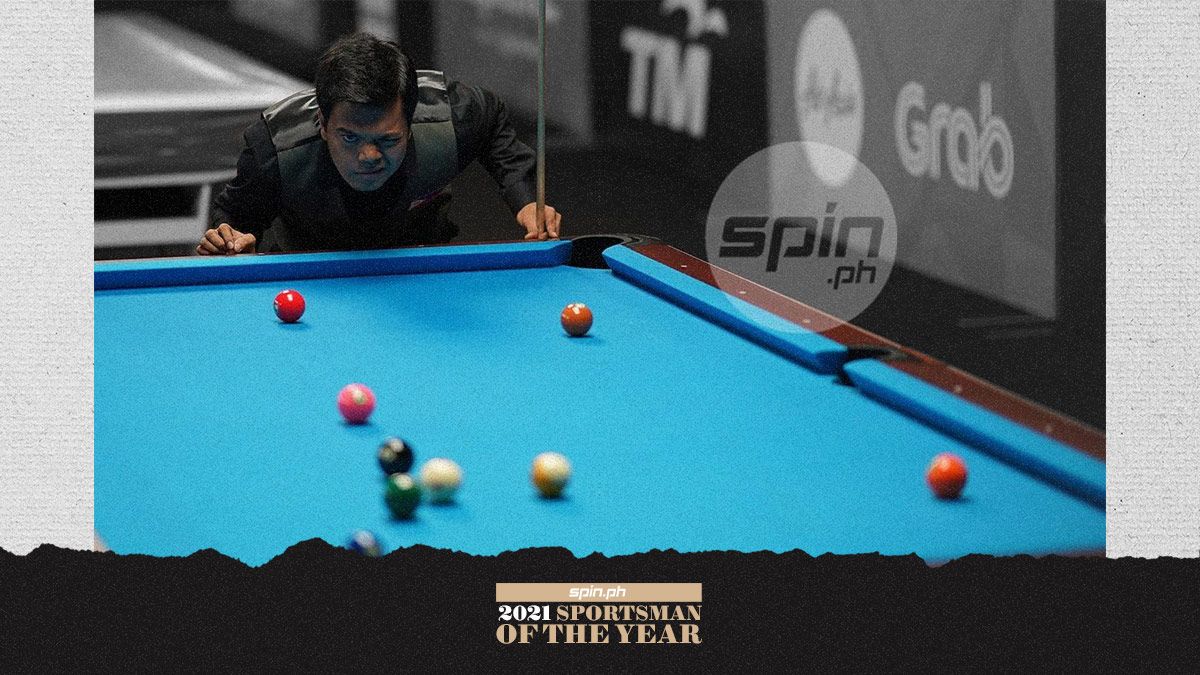 Biado sustained his torrid run as he ruled the Abu Dhabi Open 9-ball Championship in November after beating compatriot Jordan Benares, 13-6, in the finale to bag the AED20,000 (about P272,000) cash prize. 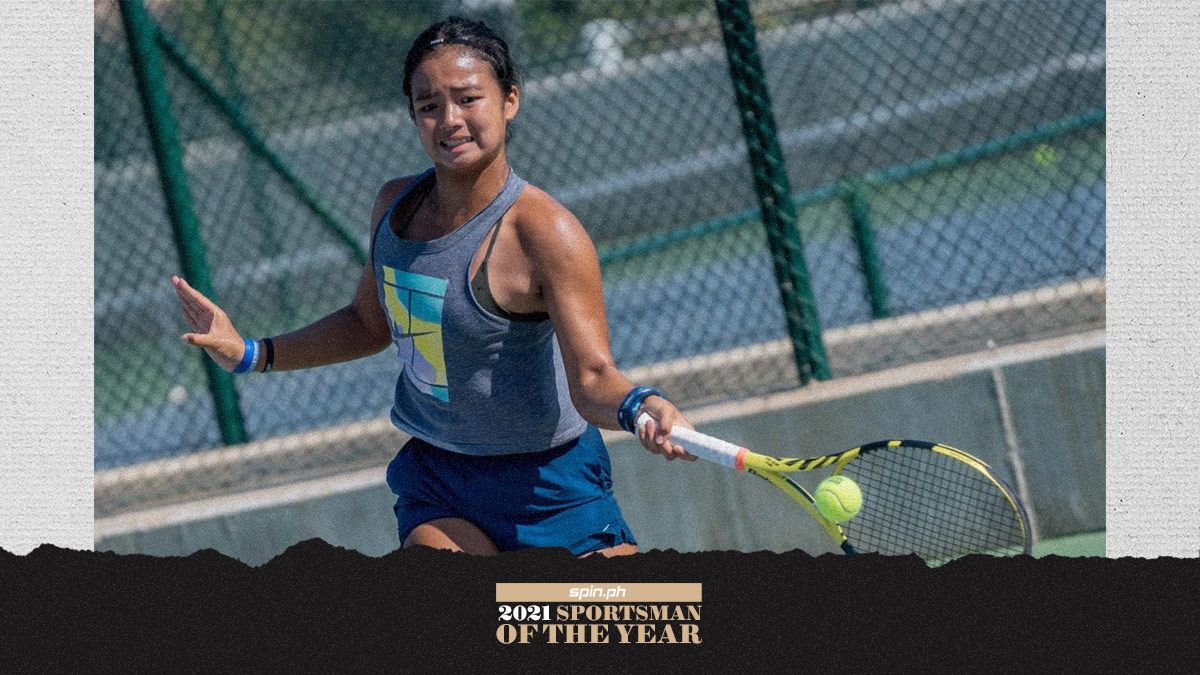 After introducing herself as the country’s newest tennis sensation in 2020, Eala picked it up from where she left off.

The teen netter wasted no time to continue making strides as she won he first professional championship in January by rallying past Yvonne Cavalle-Reimers, 5-7, 6-1, 6-2, for the W15 Manacor tournament in Mallorca, Spain.

The youngest in the field in the International Tennis Federation tournament, then at age 15, Eala showed steely nerves beyond her years to shrug off a first-set loss before prevailing against a hometown bet 13 years older than her. 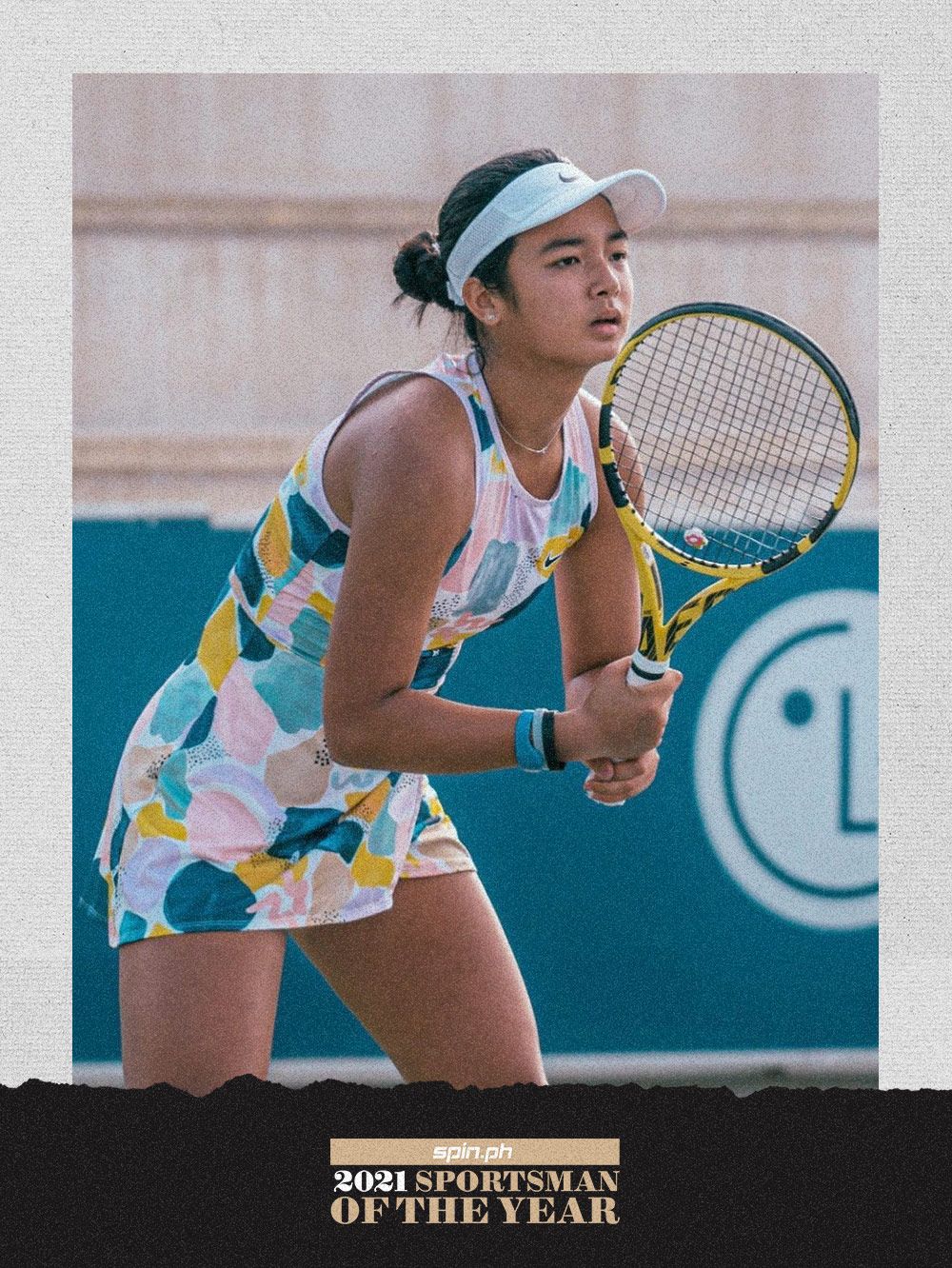 Then in June, less than a month after turning 16, Eala continued to show that she’s belongs in Grand Slam tournaments as she captured the French Open Girls’ doubles crown together with Russian Oksana Selekhmeteva. The duo beat the pair of Maria Bondarenko of Russia and Hungarian Amarissa Klara Toth in the final, 6-0, 7-5.

It was the second Grand Slam crown for her career after clinching the Australian Open Girls’ doubles championship in 2020, two months before the global pandemic struck.

Let’s see if Eala can make it a hat-trick of Grand Slam doubles victories this year.