A TALL lineup which has speed for its main weapon.

The 12-man roster will be led by 6-foot-11 Kai Sotto and 6-foot-8 Shaun Geoffrey Chiu, jacking up the team's average height to an impressive 6-5.

Yet the team will still bank on quickness in its bid to top anew the qualifier for the U-16 Fiba Asia Cup.

"Speed pa rin," Oliver said when asked what will be the team's advantage from the rest in the five-team field during the Philippine Sportswriters Association (PSA) Forum at the Golden Phoenix Hotel on Tuesday.

The team has an average height of between 6-foot-4 and 6-foot-5, which Teh describes as the ‘tallest U-16 Youth squad assembled in years.’

“Ngayon lang tayo nagkaroon ng malalaking players, so definitely it’s huge for us,” admitted Oliver. “It would be to our advantage especially sa rebounds kasi maliliit tayo (dati). And getting rebounds meant more opportunities for us to run the transition.”

The Seaba U16 features Thailand, Singapore, Indonesia, and Malaysia in a single-round robin competition. The top three finishers earn berths to the Fiba Asia U16 to be held sometime in October or November.

As it is, the Thais loom as the toughest opponent of the Filipinos in their bid for a top finish.

While Batang Gilas has no idea on the composition of opponents since teams alter their rosters during each edition of the Seaba, Teh disclosed Thailand has one Thai-American in their lineup.

Batang Gilas opens its campaign against Singapore on Sunday, and then takes on Indonesia the following day.

The team takes a break on Tuesday before facing Thailand on Wednesday, and then capping its schedule by going up against Malaysia on Thursday. 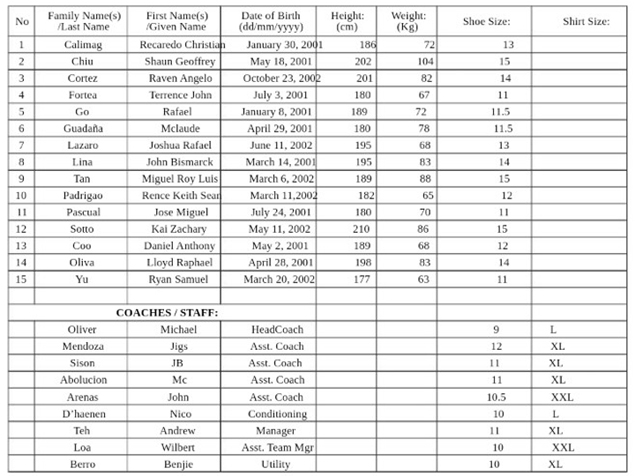