TWO world champions, a legendary icon that continues to defy Father Time, an Asian kingpin, and the pinnacle of the Southeast Asian Games.

Philippine sports hasn’t had as big a blast than it had in the year 2019.

Humble gymnast Carlos Yulo and brave lady boxer Nesthy Petecio distinguished themselves as world champs with their inspiring triumphs just hours apart one fine day in October, Ernest John Obiena made a case as the best pole vaulter in Asia, and Manny Pacquiao remained a durable figure inside the ring.

And the rest of the Filipino athletes? They put their best foot forward too, got their acts together and gave this country of pover 100 million people an early Christmas gift by bagging the SEA Games overall championship despite facing greater odds.

While there were a number of setbacks here and there, the good still outweighed the bad, and not deprived the Philippines from basking in one of the most glorious years in its sports history.

SPIN.ph looks back at the events that unfolded and made 2019 a memorable one with its list of the Top 10 local sports stories.

1. PHILIPPINES RECLAIMS SEA GAMES OVERALL TITLE AFTER 14 YEARS – Team Philippines set aside the organizational mess and the confusion that marred the country’s first hosting of the SEA Games in 14 years when it emerged overall champion for only the second time since it began competing in the regional meet in 1977. Arnis and dancesport, two non-regular events added to the SEA Games calendar by the host, sparked the Filipinos’ golden surge, which traditional sports such as athletics, taekwondo, boxing, wushu, triathlon, judo, and the ever beloved basketball, later sustained by delivering on their respective ends. Once the smoke of the two-week, four-cluster battle cleared, the Filipinos found themselves the runaway winner with a record number of gold (149), silver (117), and bronze (121) medals, surpassing their total output of 113-85-93 when they won the overall championship for the very first time in 2005. Vietnam with a 98-85-105 tally and Thailand with 92-103-123 medal count, finished a far second and third, respectively behind the host. 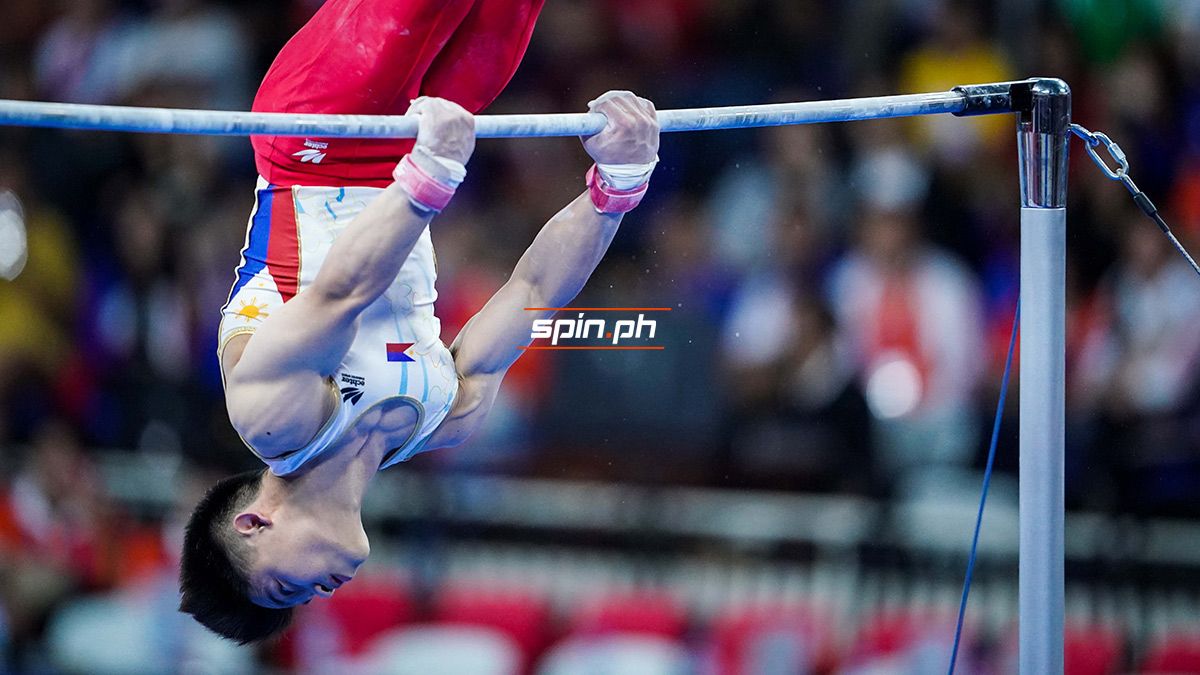 2. CALOY YULO WINS HISTORIC GOLD FOR PHILIPPINES IN WORLD CHAMPIONSHIPS – The 4-foot-11 Yulo made history in Stuttgart, Germany one October night when he bagged the gold in the floor exercise event of the 49th FIG Artistic Gymnastics World Championship. The Japan-based gymnast capped his one minute and 19-second routine by scoring 15.300 points in beating Artem Dolgopyat of Israel (15.200), and China’s Xiao Ruoteng (14.933) for the gold, becoming the first Filipino and male Southeast Asian gymnast to achieve the feat. A year ago in Doha, Qatar, Yulo already showed a portent of things to come when he clinched the bronze in the same floor exercise event of the world meet. In winning the gold, the Filipino also clinched a berth in the Tokyo Olympics in 2020. The 19-year-old Yulo, who grew up in the streets of Leveriza where his family still lives, capped a fruitful year by winning two gold and five silver medals in the 30th Southeast Asian Games here. 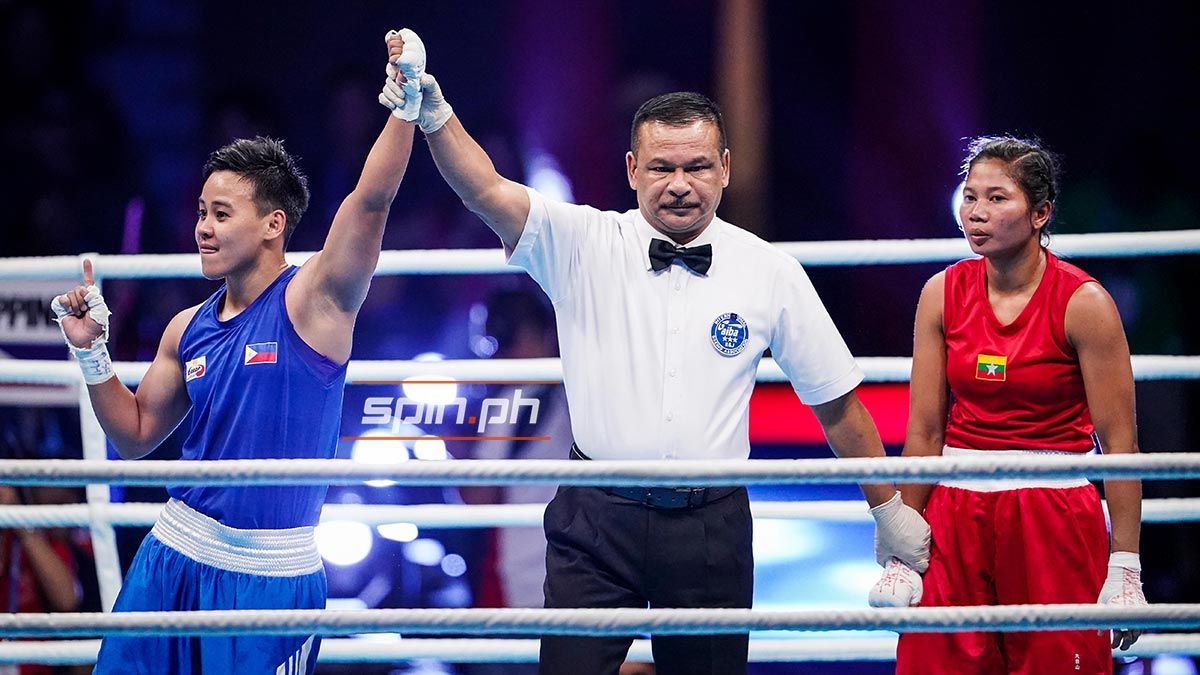 3. NESTHY PETECIO SCORES GOLDEN PUNCH IN WORLD CHAMPIONSHIPS – Always a bridesmaid, never a bride? Not anymore in the case of this native of Davao City, who finally claimed the gold in the AIBA Women’s World Boxing Championships. Petecio bucked a partisan crowd at the FSK Sports Complex in Ulan-Ude, Russia to beat local bet Liudmila Vorontsova by split decision and ruled the featherweight division of the meet. It was a breakthrough gold for the 27-year-old Filipina, who always ended up settling for the silver medal in previous campaigns either in the world or Asian level. Her victory highlighted a golden, 24-hour stretch for Philippine sports that saw the country produce two world champions in a day’s span following the triumph of Caloy Yulo in the FIG Artistic Gymnastics World Championship in Stuttgart, Germany. During the SEA Games, Petecio also ruled her weight class for her first ever gold in the biennial meet and contributing to the seven=gold haul by the national boxing team. 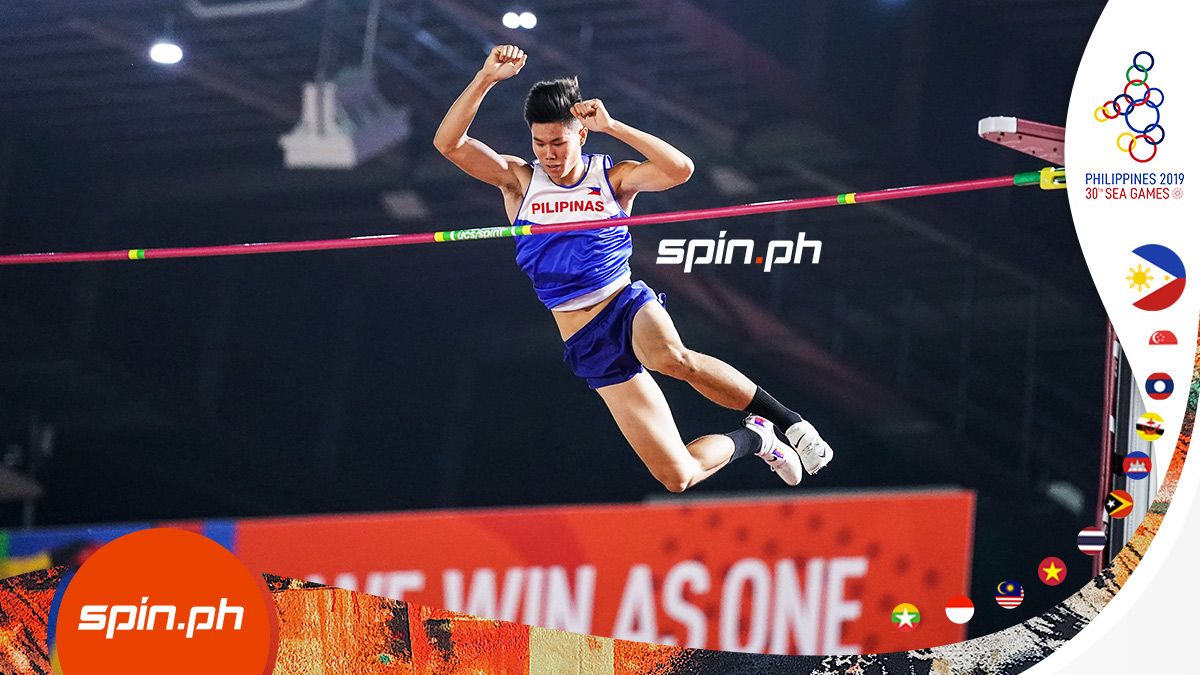 4. EJ OBIENA LEAPS TO A BERTH IN THE 2020 TOKYO OLYMPICS – To pole vaulter Ernest John Obiena belonged the distinction as the first Filipino athlete to clinch a berth in next year’s Tokyo Olympics. The 24-year-old trackster did it by topping the Salto Con L’asta meet in Piazza Chiari, Italy in September. The Filipino cleared the height at 5.81 meters in winning the event and surpassing the Olympic qualifying standard of 5.80 meters for men’s pole vault. The 6-foot-1 son of former national pole vaulter Emerson Obiena, earlier warmed up for the Olympic qualifier when he bagged golds in the Summer Universiade (Italy), and the Asian Athletics Championships (Doha, Qatar) where he broke the meet record with an effort of 5.71 meters. The Tondo-born pole vaulter repeated the trick in his final event of the year by setting a new gold standard in the Southeast Asian Games. He cleared 5.45 meters in erasing the previous mark of 5.35 meters owned by Thai rival Porranot Purahong. Obiena’s winning jump was one of seven new Games record established, and part of the 11 golds won by the Filipino tracksters in all. 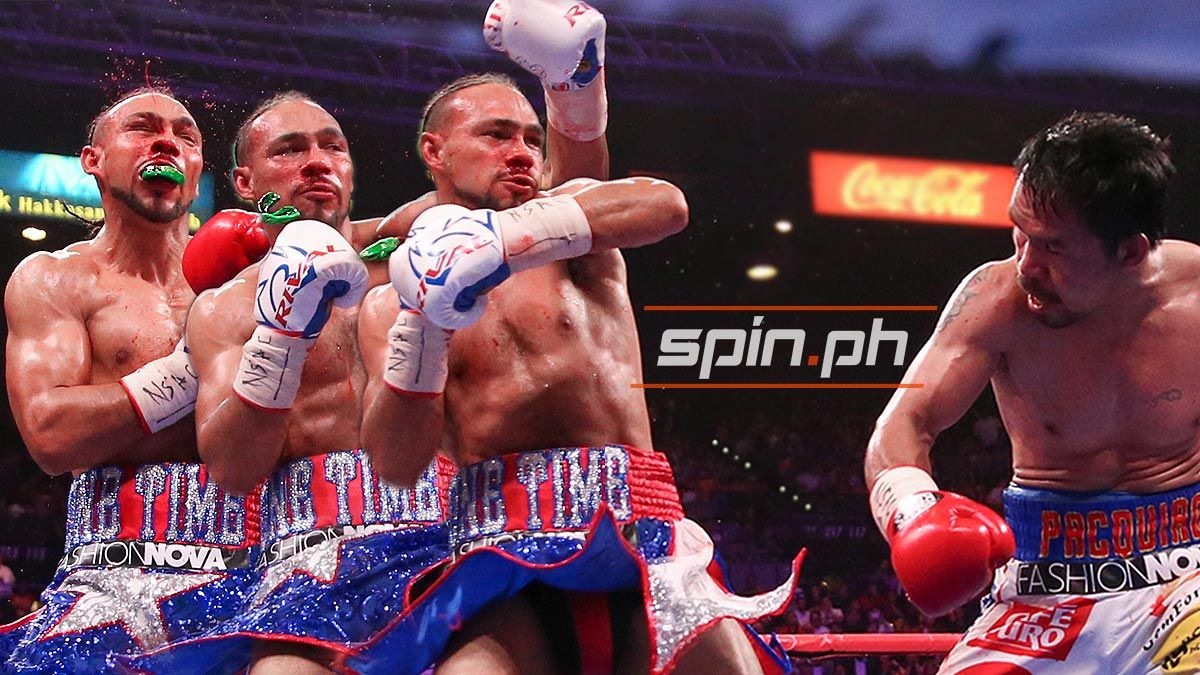 5. AGE JUST A NUMBER FOR BOXING ICON MANNY PACQUIAO – Despite his advance age of 40 – already considered old by boxing’s standards – Manny Pacquiao continues to defy odds by taking on younger and dangerous opponents, all in the prime of their careers. The Filipino senator began the year by facing former world champion Adrian Broner, the brash-talking, 30-year-old American who’s a former protégé of Pacquiao longtime rival Floyd Mayweather Jr. The pride of General Santos City beat Broner by unanimous decision in retaining his World Boxing Association (WBA) welterweight crown. Six months later, the ‘Pacman’ raised the ante when he challenged undefeated Keith Thurman (29-0, 22 KOs) for the WBA super-welterweight crown before a sellout crowd at the MGM Grand in Las Vegas. Pacquiao took the initiative and floored the 31-year-old Thurman in the opening round, only to slow down in the second half of the fight and allow his opponent from Florida to rally and make it a competitive fight. But the Filipino hurt Thurman anew in the 10th round with a perfect body shot to regain control of the bout, which he eventually won by split decision, 115-112, 115-112, 113-114. The back-and-forth action was thrilling enough to have it considered as Fight of the Year, and Pacquiao a sentimental favorite for Fighter of the Year honor. 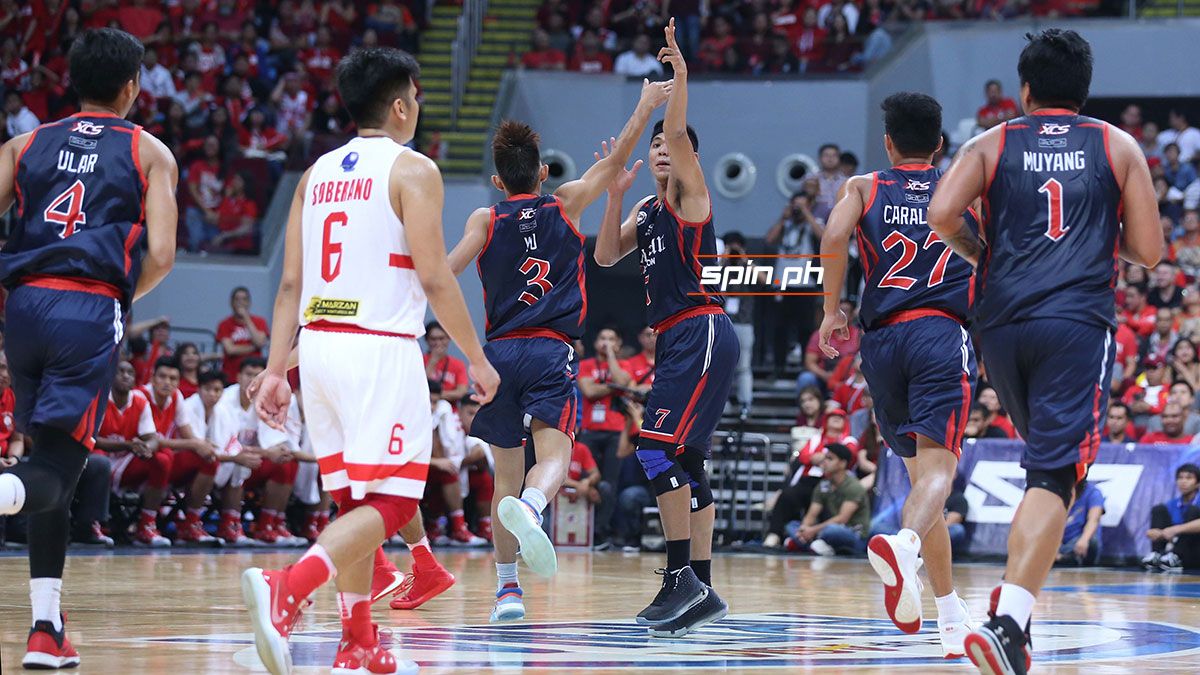 6. LETRAN IS AGAIN NCAA’S KNIGHT IN SHINING ARMOR – Letran again proved to be the thorn in San Beda’s side. The third-seeded Knights completed one of the comebacks for the ages by surviving two knockout games and beating the highly-favored, three-time defending champions in a winner-take-all match to win the NCAA Season 95 men’s basketball championship. San Beda appeared to be indestructible especially after advancing outright to the finals following an 18-game sweep of the two-round eliminations. But buoyed by their wins over San Sebastian and second seed Lyceum in a pair of knockout matches in the Final Four stepladder, the Knights stunned the previously unbeaten Red Lions in the opener, 65-64, behind the gutsy plays of point guard Fran Yu. That eventually set the stage for Letran reclaiming the championship behind a thrilling 81-79 win in the deciding Game 3 of the series. Yu was named Finals MVP as the Knights ended another championship run by the Red Lions after doing the same feat in 2015 when they halted San Beda’s five-year reign. 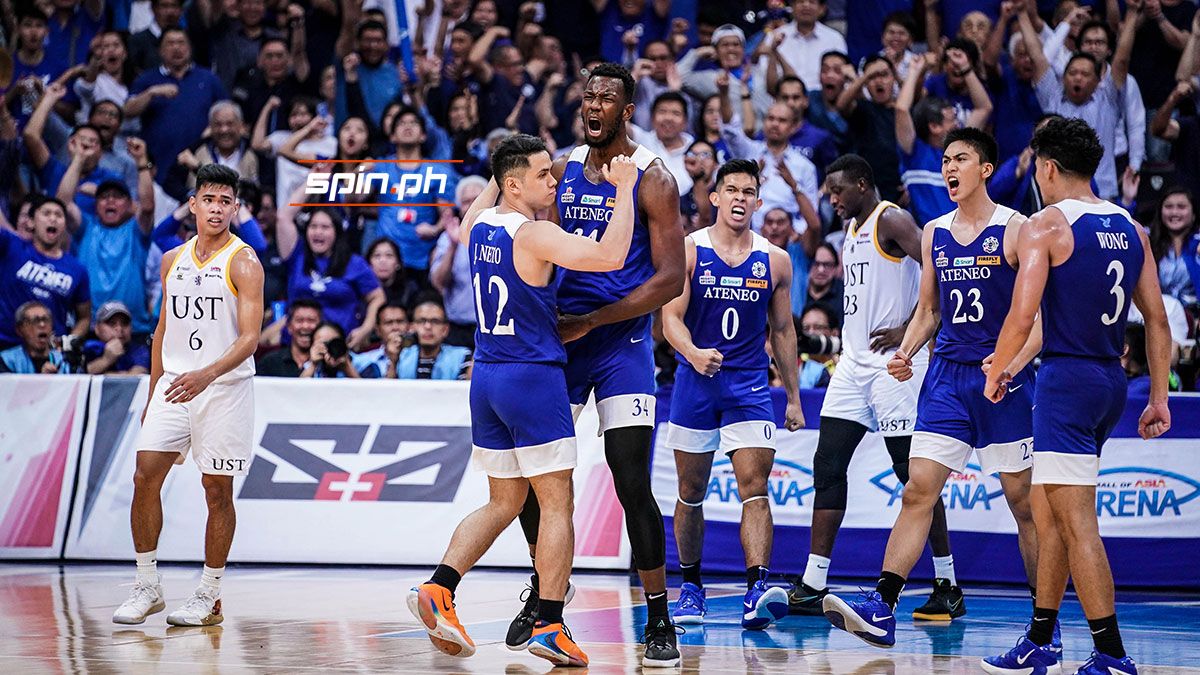 7. ATENEO COMPLETES PERFECT SEASON – Ateneo was the epitome of the perfect team which played flawless for the entire Season 82 of the UAAP. An experienced, well-disciplined unit that thrived under the structured system of coach Tab Baldwin, the reigning champion, starring star veterans Thirdy Ravena, Isaac Go, Matt Nieto, and young big man Angelo Kouame, were just too much for the opposition, dominating the two-round elimination with a 14-game sweep for an outright berth in the finals. Not even the inspiring rise of University of Santo Tomas as the fourth-seeded team that made it all the way to the championship was not enough to deny the Blue Eagles their date with history, completing a sweep of the best-of-three title series in winning the men’s basketball title for the third year in a row. Ateneo’s feat marked the first time a men’s team went 16-0 in a season, and was the first champion squad to go unbeaten since UST went on a 14-0 romp during its 1993 title run. Ravena averaged 24.5 points in the series and was named Finals MVP for the third season in a row. 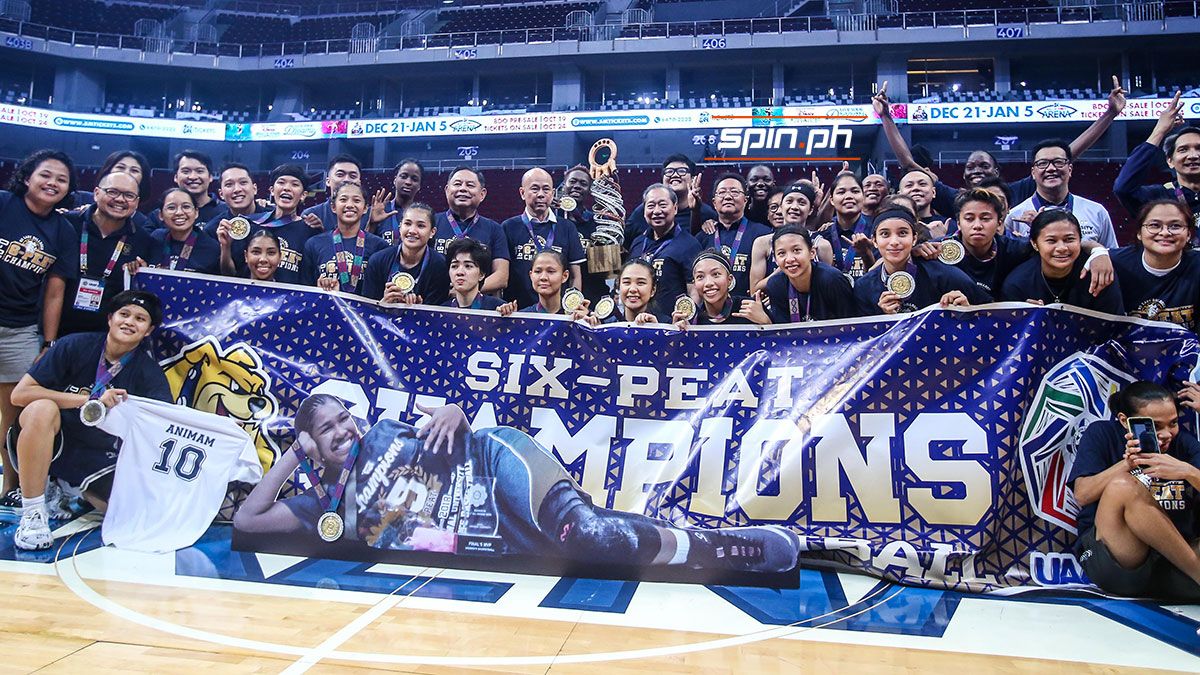 8. NU LADY BULLDOGS TAKE A BITE AT HISTORY – The National University Lady Bulldogs just kept raising the bar as far as UAAP women’s basketball is concerned. Handled by Patrick Aquino, the team won a sixth straight championship without a loss, extending its unbeaten run to 96-0 over the last six years. The UST Lady Tigresses tried their luck, but just like the five others before them, also fell short of toppling the champions from their throne. Two more seasons of a 16-game sweep would have the Lady Bulldogs surpassing the 126 winning streak set by UConn Huskies in the U.S. women’s NCAA. The team would later extend its dominance all the way to the 30th Southeast Asian Games as the Gilas Pilipinas women’s basketball squad, composed of the very same core of the Lady Bulldogs, won for the country its breakthrough gold in the regional meet, thrashing Thailand in the gold-clinching game, 91-71. 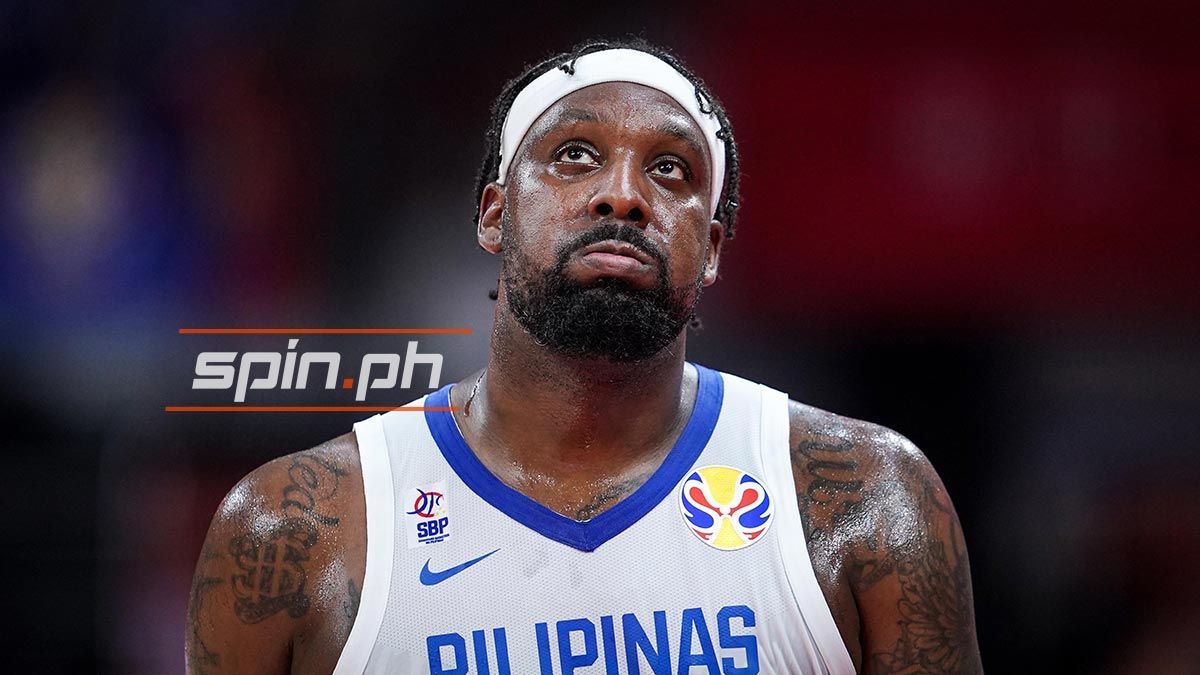 9. GILAS PILIPINAS LIMPS HOME FROM FIBA WORLD CUP – What started with modest expectations ended up a disappointment for the Gilas Pilipinas men’s team in its FIBA World Cup campaign in China. Coached by Yeng Guiao, the national team, which advanced to the tournament for the second straight time by punching a ticket right on the final day of the qualifiers, failed to register a win in the five games it played, including an 0-3 record in the Group Phase where the Filipinos were bracketed with powerhouse teams Italy and Serbia, along with Angola. It also lost its two games in the Classification Phase opposite Tunisia and Asian rival Iran. The closest Gilas Pilipinas came to winning was against the Angolans, who nipped the Filipinos in overtime, 84-81. Its 126-67 loss to Serbia meanwhile, was the biggest winning margin for the world’s No. 6 ranked team in World Cup history, erasing the previous mark of 43 points registered against Jordan (112-69) in the 2010 edition of the meet. If there’s any silver lining for the national team’s bid, it was rookie players CJ Perez and Robert Bolick provi g they are the future of Gilas Pilipinas especially with the country hosting the next FIBA World Cup in 2023. 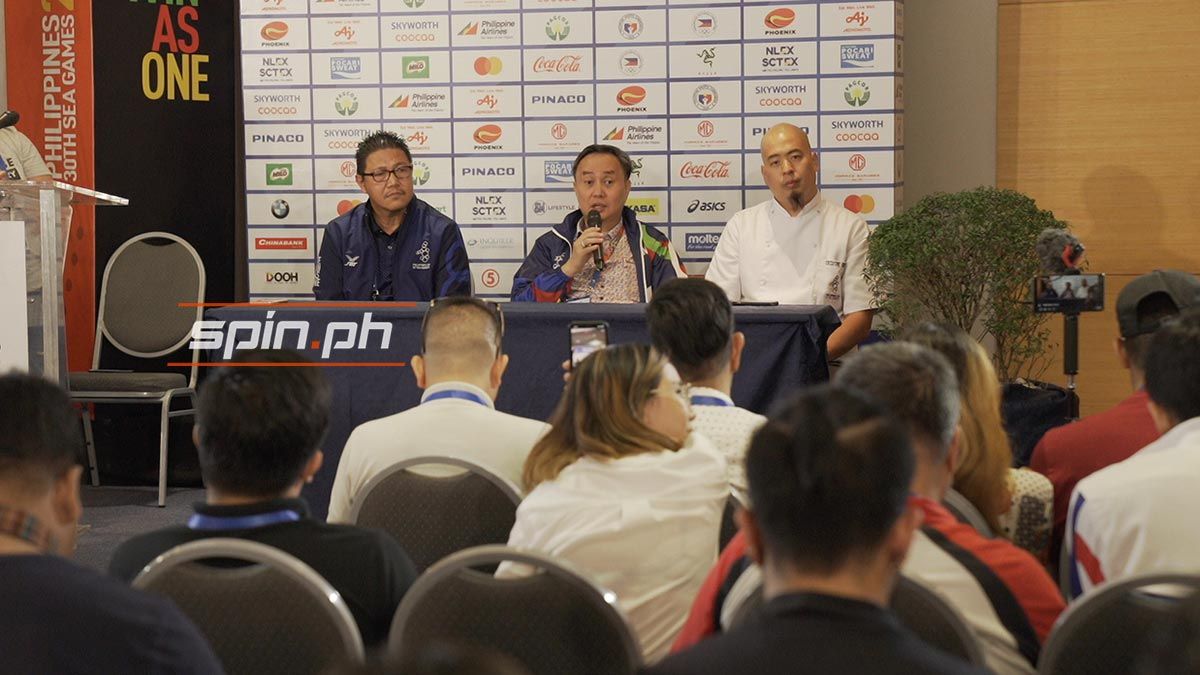 10. BAMBOL TOLENTINO ASSUMES POC PRESIDENCY – Abraham ‘Bambol’ Tolentino found himself suddenly on top of the Philippine Olympic Committee (POC) after beating athletics chief Philip Ella Juico in a special elections at the Century Park Hotel. Tolentino, president of the Integrated Cycling Federation of the Philippines (Philcycling), previously held the position as chairman, but was forced to seek the presidency when previous running mate and POC chief Ricky Vargas, irrevocably resigned from his post for being under heavy attack from ‘majority of the POC board’ after becoming one of the incorporators of the Philippine Southeast Asian Games Organizing Committee (PHISGOC) foundation, and getting involved in other various issues concerning the country’s hosting of the biennial meet. Former POC secretary-general Steve Hontiveros replaced Tolentino when he was elected as chairman of the Olympic body. 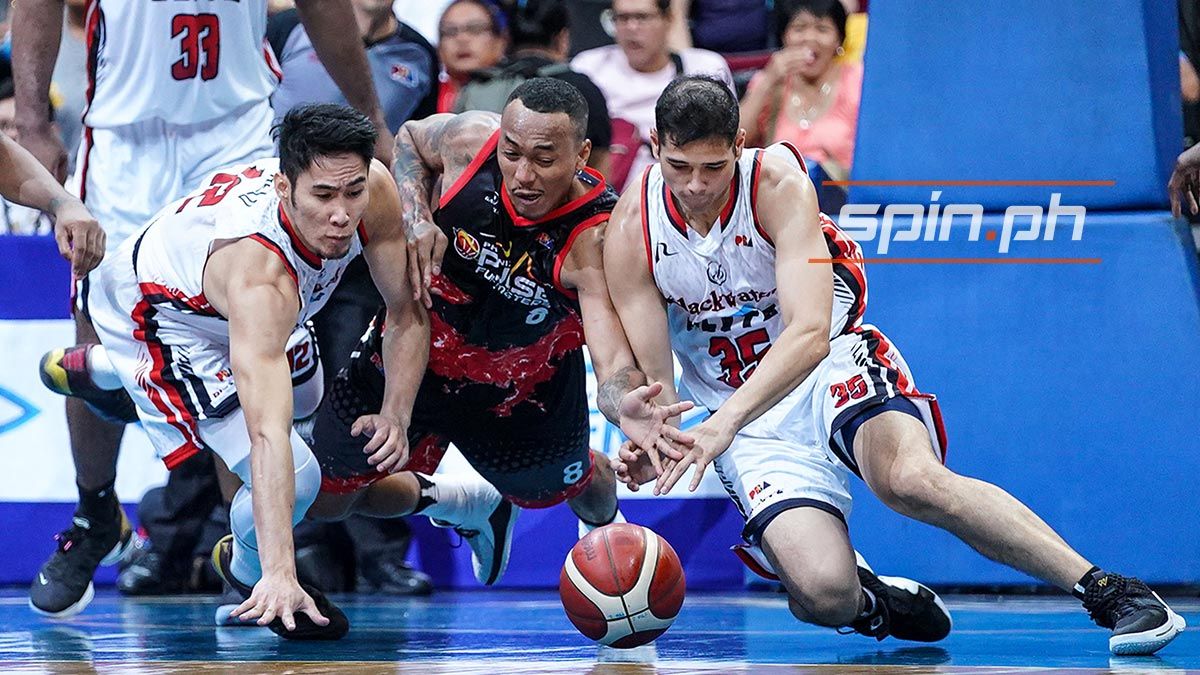