SINGAPORE - The Philippine women's basketball team lost what its coach earlier referred to as the 'championship game' of the 28th Southeast Asian Games.

Perlas Pilipinas bowed to defending champion Thailand, 62-57, early Tuesday at the start of the basketball competitions of the biennial meet ta the OCBC Arena here.

The national squad failed to sustain its momentum after coming through with a 9-0 run that put the team ahead, 44-43, in the fourth period.

The Filipinas also couldn’t convert a basket inside during the stretch run.

The Nationals had to dig deep into their bag of tricks in the second half after scoring just eight points in the second quarter to trail, 32-23, at halftime.

Afril Bernardino was the lone double digit scorer for the Philippines with 19 points while also contributing eight rebounds and five steals.

Amby Almazan had eight points and 15 rebounds for the Filipinas, who will next face Vietnam.

The loss was a dampener for the Filipina cagers, who are seeking to win their first ever gold medal in the meet but had the misfortune of going up against the mighty Thais right in their debut game.

The format will have the top team at the end of the single-round robin eliminations winning the gold medal outright. 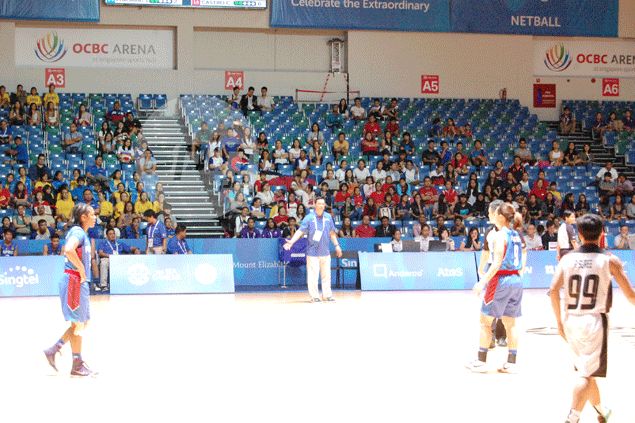