KUALA LUMPUR - Perlas Pilipinas coach Pat Aquino was left to rue the unusual circumstances leading up to a loss to host Malaysia that knocked them out of gold-medal contention in the 20017 Southeast Asian Games.

Perlas Pilipinas was scheduled to play an 11:15 a.m. match against unbeaten and reigning champion Malaysia on Thursday, just hours after playing an 8 p.m. game against Thailand.

Aquino admitted the short turnaround time between the two games was definitely a factor as Perlas dropped a 56-60 loss to the hosts, falling out of the the title race.

Worse, the team, which had to claw its way back from 15-points down to beat Thailand, 67-65, reached the team hotel at around 11 p.m. after the bus took a longer route from MABA Stadium, Aquino said.

"We had to go around the city pa before going back to the hotel. And then, we had to walk a long way to the hotel because the bus brought us down somewhere far," said Aquino.

"'Yung adrenaline was so high, I think they probably didn't sleep well. We had to wake up early (while) Malaysia had a break yesterday. It's really a big factor," said Aquino.

As if those were not enough, Aquino also lamented a three-second call and a travelling violation on Afril Bernardino late in the game that Malaysia turned into key baskets.

"For our part, those are wrong calls. The travelling of Afril was crazy and the three seconds, ang bilis. Siguro part of the homecourt advantage na sinasabi nila. Dapat handa tayo doon next time," said Aquino.

Still, Aquino said he doesn't want to take anything away from Malaysia which, he said, played an outstanding game by shooting 40 percent from the field, including 50 percent in the first half.

But he reserved his biggest praise for his team, who battled back from 16-points down to tie the score at 54-all with a little over two minutes left in the game.

"Let's not take anything away from Malaysia. They did play well today. They were attacking from the inside and the outside," said Aquino. 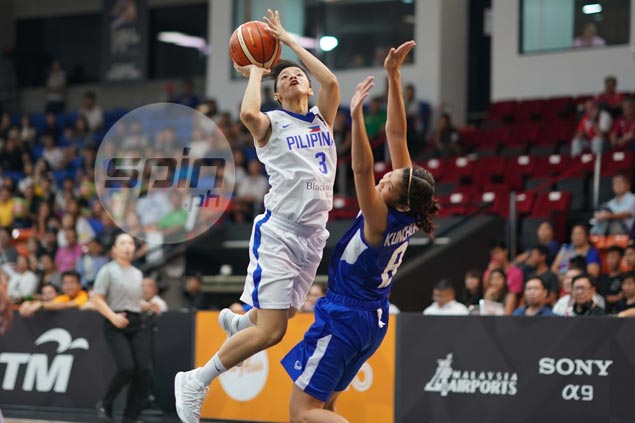 "We fell short. That's how things are. I'm just happy that we were there. I know the girls were tired already from last night's game and in this game.

"Wala na ako masabi kundi sorry (to the Filipino people). We failed the expectations of everyone. But I'm still proud of my girls for doing everything to win. I can see in their eyes na they wanted to win."

Despite the disappointment, Aquino hopes the team can regain its composure in time for a match against Vietnam on Friday which Perlas needs to win to get a shot at the bronze medal.