PBA board flies to KL to extend support for Gilas, PH contingent in SEA Games

MEMBERS of the PBA board flew to Kuala Lumpur on Monday to show support to Filipino athletes – specifically the Gilas cadets – campaigning in the 29th Southeast Asian Games.

Commissioner Chito Narvasa along with former league chairman Robert Non of the San Miguel Corp. group and Patrick Gregorio from the MVP bloc led the small delegation, which will watch Gilas Pilipinas when it plays Myanmar on Tuesday night at the MABA Stadium.

Hours upon its arrival, the group tendered a sumptuous dinner to the entire Gilas team courtesy of San Miguel Corp. president and CEO Ramon S. Ang.

All 13 players were present including the team staff, with the exception of head coach Jong Uichico and deputy Jimmy Alapag, who were at the MABA Stadium to scout the game between Thailand and host Malaysia.

The Thais beat the Malaysians, 90-75, behind the 36-point explosion of Tyler Lamb, including seven three-pointers. Gilas will meet Malaysia on Wednesday.

[See It will take a 'different philosophy' for PH to beat Korea, says Joe Lipa]

The SMC group – also through RSA – likewise hosted a dinner for the women’s volleyball team where it has four players from its Petron ballclub, namely Mika Reyes, Rhea Dimaculangan, Ces Molina, and Aiza Maizo.

“Parang token of appreciation and support for both basketball and volleyball teams by Mr. Ang,” said Marcial from the Malaysian capital.

If not for separate commitments, the board would have come in full force as it usually did in supporting the Gilas program in various international competitions. Not around were board members of Alaska, KIA, Rain or Shine, NLEX, and Star.

Former chairman Ricky Vargas of TnT Katropa, who is also president of the Alliance of Boxing Associations in the Philippines (ABAP) is also expected to arrive in time for the team’s game against Myanmar.

The board returns to Manila on Wednesday morning. 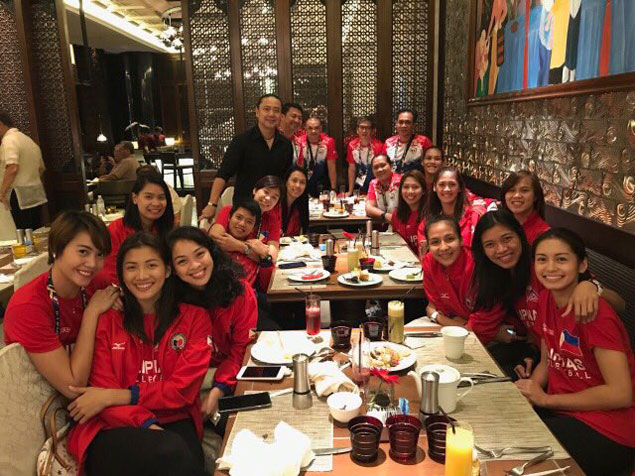