LOOKBACK: How PH fared the last time SEA Games were held in Vietnam

SAVE for the inglorious debacle that has befallen the men's basketball team, Hanoi has been fairly good to our Philippine athletes.

Finishing fourth, it's the country's finest performance in the biennial event that wasn't hosted here.

The last time the Philippines had this level of success in the SEA Games outside of the country? Also in Vietnam.

The Filipino contingent also ended up at fourth place in the 2003 SEA Games as it bagged 49 gold, 55 silver, and 75 bronze medals from the 600 athletes that competed in 28 sports.

It was four golds more for the Philippines as it narrowly beat Malaysia to make it to the top four.

Wushu also helped the Philippines get over the hump with six golds thanks to golden doubles from artists Arvin Ting (gunshu) and Willy Wang (qianshu), as well as victories from Eduard Folayang and Dolly Andres in sanshou. 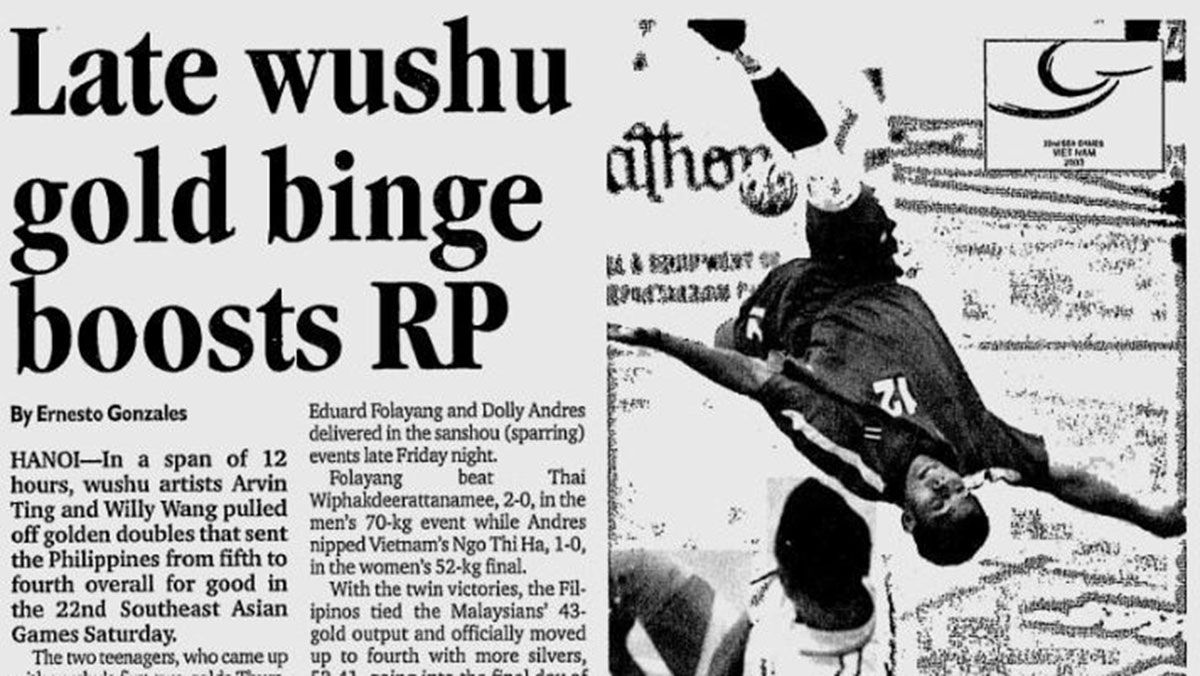 Toni Rivero was also sensational for the taekwondo team which had five gold, three silver, and six bronze medals while these games also saw standout performances from fencing which delivered four golds led by Richard Gomez, and chess led by Mark Paragua who was pivotal in the delegation taking home three gold medals including the men's individual rapid.

It was an expected gold medal performance for the RP Team in men's basketball with Gary David, Ranidel de Ocampo, Marc Pingris, and Rich Alvarez carrying the Aric del Rosario-coached squad to a dominant 5-0 sweep in Ho Chi Minh. It was the Philippines' last gold medal before it was served a Fiba suspension and the event was scrapped for the Manila staging in 2005.

Boxing, though, incurred the biggest blackeye from the games with just a lone gold medalist in light flyweight Harry Tanamor and having five silver medalists, prompting coach Boy Velasco to cry foul. "Pinagkakatay tayo rito," he was quoted in a report by Philippine Daily Inquirer's Roy Luarca.