[Editors' note: With this piece, SPIN.ph completes its list of the Top 10 Sports Heroes of 2017. On Wednesday, we will announce our choice for the 2017 Sportsman of the Year]

AT 16, Ma. Cielo Honasan is already one of the most decorated para athletes in the national team, having won three gold medals in the 2017 Association of Southeast Asian Nations (Asean) Para Games in Kuala Lumpur last September.

Hard to believe the teenager turned to running to escape bullying.

Honasan, you see, was born with a rare condition called Beckwith-Wiedeman Syndrome, a disorder that leads to the overgrowth of certain parts of her body. In her case, Honasan’s right leg and arm are longer than the other. 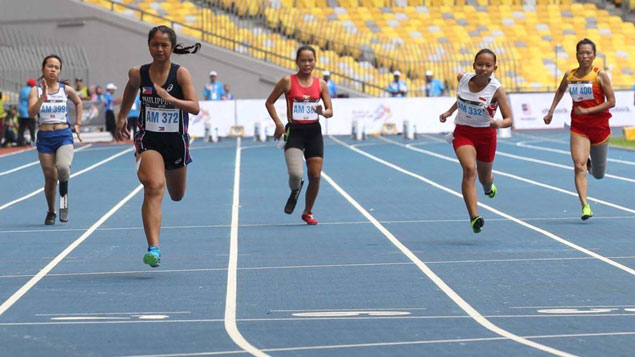 Because of her condition, Honasan became a target of bullying from her elementary classmates in her hometown of Botolan in Zambales and, needing an escape, the kid turned to sports. She tried out for a spot in her school’s track and field team.

The bullying stopped after she made the track and field team, and the tryout opened a whole new world for Honasan, who became a member of the Central Luzon team to the 2015 Palarong Pambansa in Tagum before eventually becoming a member of the national team.

Two years later, she made a smashing international debut in the Asean Para Games, where she was the youngest competitor in the T44 classification (single below knee amputation or an athlete who can walk with moderately reduced function in one or both legs).

Honasan swept the 100-meter, 200m, and 400m events, emerging as one of the most bemedalled Filipino athletes in the multisports showpiece.

Honasan capped the year with another impressive performance Asian Youth Para Games in Dubai, where she once again ruled her favorite 100m run and placed second in the 200m and 400m events while going up against the best in the continent.

However, a technicality prevented her from being eligible for a medal.

She is the least bit disappointed over the disqualification, seeing a world of possibilities as she embarks on an athletic career.

This early, Honasan, who is coached by Joel Deriada, is already getting scholarship offers from various universities in Manila, but the Grade 11 student have declined the offers for now as she decided to finish her high school studies in her hometown.

The future is bright, indeed.