ALMOST nine decades removed from the first time the Philippines ever bagged a medal in the Olympic boxing competitions, the country's hunt for its first ever gold medal in the sport continues.

Team Philippines had two legitimate chances in the 2020 Tokyo Olympics to end the long drought, but Nesthy Petecio and Carlo Paalam still couldn't break through the glass ceiling.

Those heartbreaks are just the latest in Philippine boxing's long list of close shaves.

Though the sport accounts for eight of the 14 medals the country has won in the Summer Games, gold has been elusive.

Paalam threw everything including the kitchen sink during the men's flyweight final, but a devastating four-punch combo from Galal Yafai of Great Britain rocked him to the ground in round one.

The Cagayan de Oro-born boxer made ways in the following rounds to catch up, but he could only convince one of the five judges to favor him as he fell short in his gold medal bid.

It was still a silver nonetheless for Paalam, who rampaged through the draw starting with a stunning 4-1 win over Ireland's Brendan Irvine in the round of 32, before taking down Algeria's Mohamed Flissi via unanimous decision in the round of 16, Uzbekistan and top Shakhobidin Zoirov with a 4-0 quarterfinal stunner, and a deliberate rout of Japan's Ryomei Tanaka in the semis.

Sena Irie never allowed Petecio to find her rhythm in their featherweight clash.

The Japanese opted for repeated clinches that threw the Davaoena out of her game, which allowed the hometown bet to become the first ever gold medalist in women's Olympic boxing with all five judges favoring her.

Still, Petecio's prowess was evident, from her clinical 5-0 shutout of Congo's Marcelat Sakobi Matshu in the round of 32, a stunning split decision win over top-seed Lin Yu-ting of Chinese Taipei, and a bombastic 5-0 demolition of Yeni Arias of Colombia, to her impressive 4-1 semis win over Italy's Irma Testa.

Petecio and Paalam matched the silver of Mansueto 'Onyok' Velasco, who had a controversial bridesmaid finish in Atlanta in 1996.

The pint-sized bet, then fresh from a silver medal finish in the 1995 Asian Boxing Championship, was relentless from the first ring of the bell, forcing the referee stoppage win in round one of his match against Tsai Chih-hsiu of Taiwan in the round of 32.

He then manhandled Cuba's Yosvani Aguilera, 14-5, in the round of 16, before taking down Morocco's Hamid Berhili, 20-10, in the quarters, and Spain's Rafael Lozano, 22-10, in the semifinals.

But in the finale of the light flyweight division, Velasco struggled to put up points against the bigger and meaner Daniel Bozhilov Petrov of Bulgaria despite his late flurry, leaving everyone, especially the Philippine delegation inside Alexander Memorial Coliseum stunned.

It was a silver he took home, but many felt that it was a gold stolen out of Onyok's grips.

There have also been comparisons to what happened to Anthony Villanueva 32 years earlier, settling for silver after a split decision loss to Stanislav Stepashkin of the Soviet Union in the featherweight division final of the 1964 Tokyo Olympics.

Though bloodied from the right eyebrow in the first round, the 19-year-old also brutalized Stepashkin in the following rounds, yet only got the favor from two of the five judges in a really close call at the Korakuen Ice Palace.

Villanueva showcased his strength after rolling through the draw, first eking out a 3-2 win over Giovanni Girgenti of Italy in the round of 32, before steamrolling over Tahar Ben Hassan of Tunisia, 4-1, in the round of 16, a referee stoppage win over Piotr Gutman of Poland in the quarterfinals, and a dominant 4-1 split decision over Charles Brown of the US in the semifinals.

Tough as all four losses were, the silver medal is still something worth to be proud of. 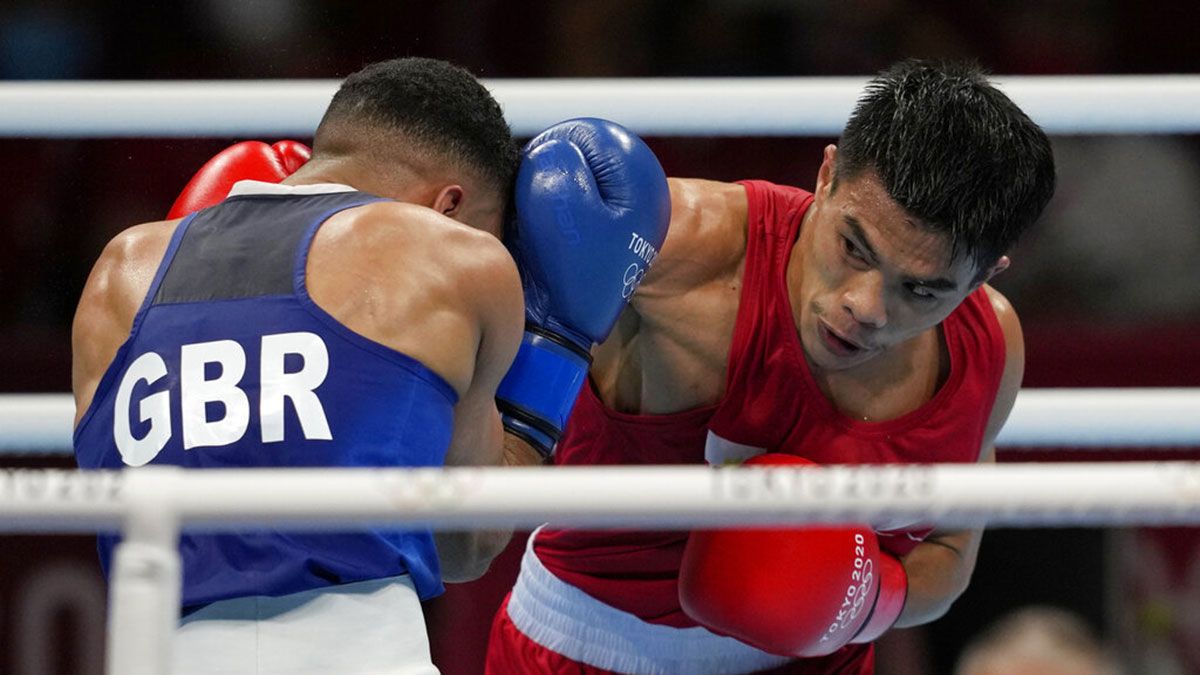 Even the other four boxers who have won their bronze medals could proudly hoist their accomplishments in the quadrennial showpiece.

Jose Villanueva was the first boxer to deliver a medal for the Philippines, taking home the bronze in the bantamweight division in the 1932 Los Angeles Olympics.

The Binondo-born pug earned a bye in the quarterfinals, where he defeated Akira Nakao of Japan, before falling to eventual gold medalist Horace Gwynne of Canada in the semifinals.

He did gain consolation as he vented his ire on US fighter Joseph Lang in the bronze medal match to reach the podium in front of a packed crowd inside the Olympic Auditorium, 32 years ahead of his son Anthony's silver medal feat.

Leopoldo Serantes also earned a bronze medal for the Philippines in the light flyweight division in the 1988 Seoul Olympics.

A former soldier, the 26-year-old had Anthony Villanueva serving as his coach and earned a bye to the round of 32 where he immediately displayed his power to pull off a referee stoppage win over Hassan Mustafa of Egypt.

Serantes continued to flex his prowess in the next stages, scoring a unanimous decision win over Sammy Stewart of Liberia in the round of 16 and another referee stoppage against Mahjoub Mjirich of Morocco in the quarterfinals, before Bulgaria's Ivailo Khristov gave Serantes a taste of his own medicine, shutting him out with quick jabs to take the unanimous decision triumph at Jamsil Students' Gymnasium.

The Philippines' staying power in the light flyweight division rolled on in the 1992 Barcelona Olympics, this time with Roel Velasco bagging a bronze medal in the same weight category.

The 23-year-old boxer from Bago, Negros Occidental was a sight to behold at the Pavelló Club Joventut Badalona, showcasing his sensational fists right from the round of 32 where he decimated Kenya's James Wanene, 16-1, and in the round of 16 where he pounced India's Rajendra Prasad.

Velasco then escaped with a close 7-6 win over Great Britain's Rowan Williams in the quarterfinals, but ran straight to a wall in the semifinals as he suffered a referee stoppage defeat in the first round of his bout against eventual gold medalist Rogelio Marcelo of Cuba.

Velasco, of course, is one of the current mentors in the Philippine boxing team, along with older brother Nolito, who is the head coach of the women's team in Tokyo.

And of course, the fourth of the bunch is Eumir Marcial, who made a strong case in the men's middleweight division of the Tokyo Games.

The Zamboangueno boxer earned a bye in the round of 16 and destroyed Younes Nemouchi of Algeria, forcing a referee stoppage due to an injury, before a sensational first round knockout of Armenia's Arman Darchinyan in the quarterfinals to assure himself of a medal.

Marcial, however, ran straight to a brick wall against eventual silver medalist Oleksandr Khyzhniak of Ukraine, narrowly losing via a 3-2 split decision in the semis and end up with a bronze medal.

Painful as it may be to look back at the history books, the solid three-medal haul the Philippine boxing team has had in Japan may be a seen as a solid indication that Filipino boxers are on the upswing anew.

And after Petecio, Paalam, and Marcial's podium finishes, it's no longer that far-fetched the country can register another strong performance in Paris in three years' time.

Who knows, the 2024 Olympics may finally be where Filipino boxers will have their gloves raised at the end of the tournament and finally hear that sweet Lupang Hinirang blasting through the speakers.