Diaz lifted a total of 200 kilograms to finish second behind gold medalist Hsu Shu-Ching of Chinese Taipei in the women's 53 kg. class, ending a medal dry spell that dates back to boxer Mansueto 'Onyok' Velasco's silver in the 1996 Olympics in Atlanta.

Diaz also became the first ever Filipina, and the first in weightlifting, to land in the Olympic for the country.

The 25-year-old native of native of Zamboanga City previously competed in the 2008 Beijing (wildcard) and 2012 London Olympics but came home empty handed on both campaigns.

This time, there was no denying her.

[See Diaz stands to receive P5M from PSC. And that's just for starters]

It was an unlikely turn of events for Diaz, who was actually about to settle for the bronze since fancied Li Yaun of China, who just moments earlier set an Olympic record in the snatch after lifting 101 kilograms, still has two attempts left in the clean and jerk.

But to the horror of the crowd at the Riocentro Pavilion 2, Li couldn’t complete her final two attempts at 126 kilos, thus eliminating her from a podium finish.

Shu-Ching won the gold convincingly with a total lift of 212 kgs. or 12 kgs. ahead of Diaz.

The Filipina actually had a slow start when she only lifted 88 kilos in the snatch to finish fifth at the halfway mark of the competition.

Li quickly showed the way following her record breaking feat at 101 kgs, followed by Shu-Ching with 100.

But Diaz bounced back in the clean and jerk, lifting 112 kilos on her second try to surpass third-running Yoon Jun Hee of South Korea and assure herself of a podium finish.

“Thank you, Lord,” she shouted shortly after.

Hsu lifted 112 kg on her second try and didn’t even bother to lift a third try following the disastrous finish by the Chinese lifter.

Hsu is now looking to claim the gold medal from the London Games four years ago. The Taiwanese champion called on Olympic officials to decide on the matter, after retest of samples from 2012 Olympics winner Zulfiya Chinshanlo turned out positive.

The Kazakh lifter was suspended in June and was not entered in Rio. 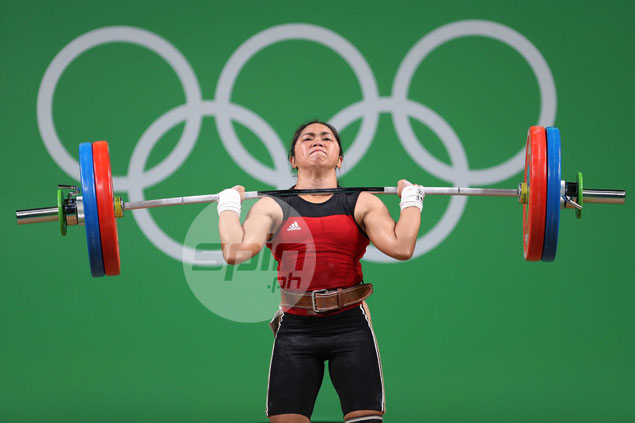