by tim reynolds, ap
3 days ago

MIAMI — The banners are all aligned next to one another, swaying from the rafters over the court where the Miami Heat play their games. LeBron James has one. So does Dwyane Wade. Alonzo Mourning and Tim Hardaway, too.

They commemorate Olympic gold medals won as a member of the Heat.

And Bam Adebayo wants one.

The Heat center and his USA Basketball teammates — those who were cleared to fly or weren't still playing in the NBA Finals, anyway — arrived in Japan on Tuesday for the Tokyo Olympics. The Americans are seeking a fourth consecutive gold medal, and if they come home with that shiny prize, then Adebayo's banner plan will be complete as well.

"That's my goal," Adebayo said. "I want Miami to think of me as one of the greats to come through the city. I want to be able to warm up and see my name in the rafters. A lot of guys don't get this opportunity, so my goal is just to make sure that I seize this moment and not mess around with it."

Adebayo is one of two centers on the Olympic roster. New addition JaVale McGee — who replaced the injured Kevin Love — is the other. The Americans start Olympic play Tuesday against France, a significant game considering the French are the team that eliminated the US from medal contention in the Basketball World Cup two years ago.

Adebayo will play a significant role in the US rotation.

"He does what he does," U.S. coach Gregg Popovich said. "He's active. He's a rebounder. He runs. He knows how to play with teammates. He's handled the ball in Miami a lot, on wings, on elbows, out top, (dribble hand-offs), splits, pick-and-rolls. He's going to be very valuable to us and obviously our best rebounder."

It's a much different feeling for Adebayo now, compared with his first USA Basketball experience.

He was cut from the World Cup team in 2019 after a week of workouts in Las Vegas, and Adebayo hadn't been back to that city until July 5 — when he flew there from Miami to start Olympic training camp. Walking through the airport that day, he acknowledged some of the frustration from not making that U.S. roster two years ago was still present.

"I'm not the type of person that holds grudges," Adebayo said. "But it's a motivation factor, for sure."

Mourning and Hardaway won their banners as members of the Heat at the 2000 Sydney Olympics. Wade won his at the 2008 Beijing Games; James won at the 2012 London Games. James also won in 2008 and several other players who have worn the Heat uniform — including Chris Bosh, Shaquille O'Neal, Jimmy Butler, Andre Iguodala, Ray Allen, Gary Payton and Christian Laettner — are among those who have Olympic gold in their collection as well. 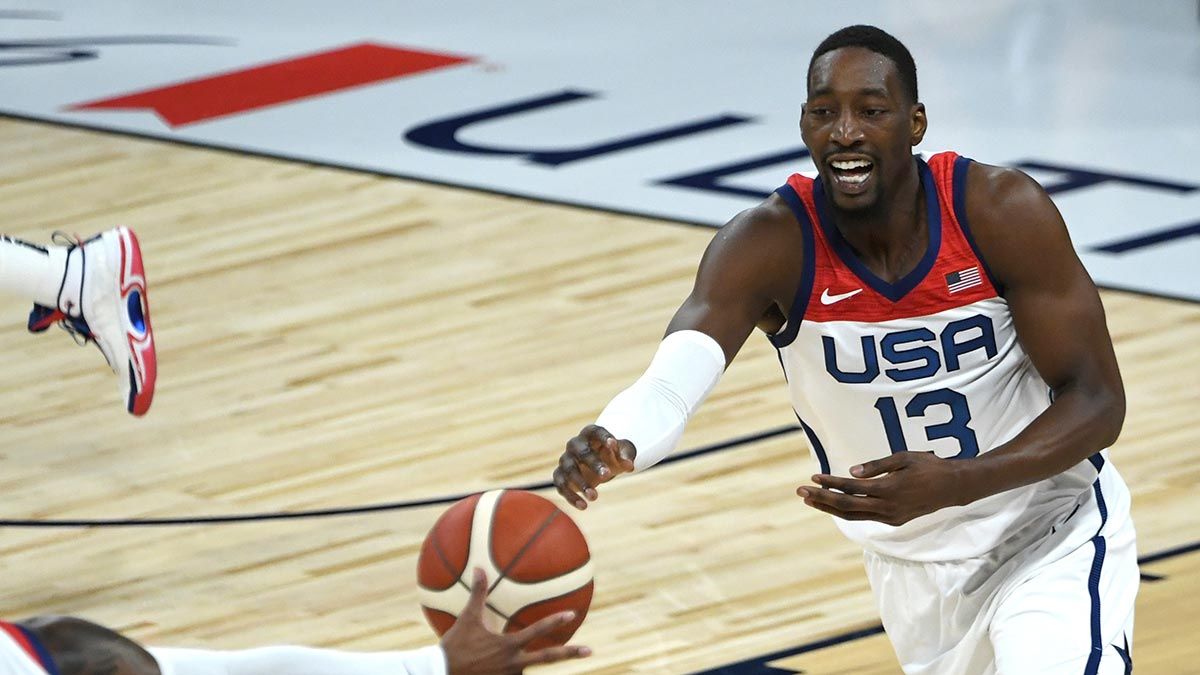 But the banners are reserved for those who win gold while members of the Heat.

These days, that phrase — "my city" — takes on a different meaning.

Miami is hurting right now, a month or so removed from the condo collapse in Surfside, Florida, a waterfront town just a few miles north of downtown Miami. The middle-of-the-night crumbling of that building has been blamed for at least 97 deaths with a handful of people still unaccounted for.

One of Adebayo's final things to do before he left Miami for USA Basketball's camp in Las Vegas was to go to the site, to pay his respects, to thank first responders, to tell them he would have them in mind on his Olympic journey. He was told that the bottom seven floors of the complex were essentially pushed underground by the weight of the floors above them and that made him think of the apartment building where until recently he and his mother lived; Adebayo was on the 48th floor, his mother on the fifth.

"Going there, putting a wreath down for those who were missing, those who were recovered, those who didn't make it, it just hits you all at once that it could have been some of your friends, that it could have been anyone in here," Adebayo said. "I talked to the first responders and they were still full of hope. I felt like I was a therapy person. That's why I say it's my city because those faces, they responded to me. I wasn't doing anything special. I was just showing up and giving my support to them."

He spoke with someone who was rescued, along with plenty of people who were working long hours digging through the rubble.

"The least I can do is go out and try to win my country a gold medal, win my city a gold medal," Adebayo said. "To bring that back to Miami, it would just give some people a little light, a little spark that they need right now."