Monsour del Rosario of taekwondo and Robert Bachmann of squash said holding another election for president and chairman as ordered by Pasig City Regional Trial Court judge Maria Gracia Cadiz-Casaclang is the best way for the POC to restore its credibility.

“Let’s pursue the election para maklaro ang lahat, on who does the NSAs really want,” Bachmann, president of the Squash Rackets Association of the Philippines, said on Tuesday as he joined Del Rosario and Philippine Karatedo Federation secretary-general Raymund Lee over lunch at the Sangeupsal Korean restaurant.

Del Rosario, representing District 1 of Makati in Congress and current the secretary-general of the Philippine Taekwondo Association (PTA), agreed.

“I think that’s the clamor of the majority of the NSAs and the other sports leaders,” he stressed. “Let’s do it fair and square. It’s long overdue. Let’s see if that would be the solution."

But at the same time, they urged all parties involved to respect the outcome of the elections, if ever there will be one.

“We should also respect the result of the elections. If Cong. Peping wins, unite under him,” said Bachmann, younger brother of Alaska PBA board of governor Dickie Bachmann.

The RTC Branch 155 decision declared null and void the POC polls held on Nov. 25 where Cojuangco ran unopposed to win a fourth straight term as president.

The court ordered the country's highest Olympic body to conduct a new election and include Ricky Vargas of boxing and cycling’s Bambol Tolentino on the list of candidates for president and chairman, respectively.

Vargas and Tolentino were earlier disqualified by the POC election committee because they were not ‘active members’ of the POC general assembly, one of the pre-requisites for an official seeking a position within the Olympic body. 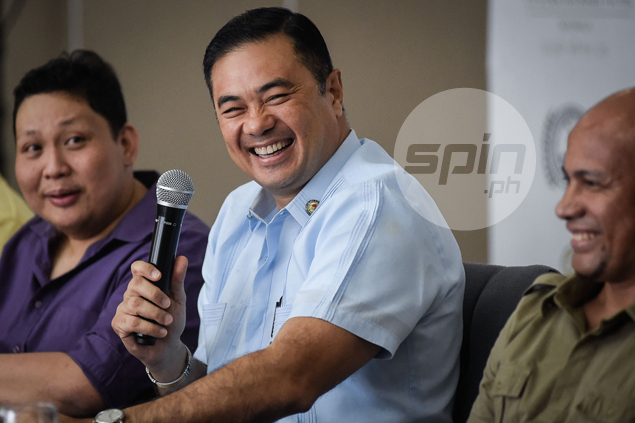 Del Rosario admitted the POC dispute has left him in a quandary.

And if he has his way, Del Rosario said he wants Vargas and Cojuangco to settle things between themselves.

“Ako ang iniisip ko mag-usap na lang silang dalawa,” he said. “For me, it would be nice if the two leaders will talk.”