With fans back in the stands in US, teams adapt again to noise

MADISON, Wisconsin — Big Ten teams spent the opening week of the season getting reacquainted with an unfamiliar sound.

After playing in empty stadiums throughout the pandemic-delayed 2020 season, teams across the country welcomed spectators back and many stadiums were packed on the first big weekend of the season. In the Big Ten, that meant the resumption of some traditions, too, from midnight yell practice at Texas A&M to Wisconsin students bouncing to "Jump Around" to Iowa fans waving to kids at the children's hospital adjacent to Kinnick Stadium.

The return of fans on game day also requires teams to adjust. Competing without spectators made it easy for players and coaches to communicate with one another last year. Now it's a little trickier.

"You could definitely see, especially with some of the younger guys, it's hard to simulate that in a practice," Wisconsin defensive coordinator Jim Leonhard said. "You really go over a year (since) that was an issue, when you couldn't yell from the sideline and catch somebody's attention."

Teams tried their best to simulate it anyway.

Maryland was at home for its season-opening 30-24 victory over West Virginia and figured to benefit from the atmosphere generated by a partisan crowd. The Terrapins piped in crowd noise for last Thursday's practice anyway just so they could get accustomed to it.

"It drives us crazy as a coach to have to deal with it, because you can't necessarily coach your guys, but (we were) anticipating that we would have a good crowd," Maryland coach Michael Locksley said.

The difficulty of communicating amid crowd noise figured to be a bigger factor for younger teams. Upperclassmen at least had experience playing in packed stadiums before 2020, but freshmen and sophomores hadn't dealt with this before.

Wisconsin offensive guard Jack Nelson acknowledged the prospect concerned him as he prepared to make his first career start. He discovered he had no reason for concern.

"I'd say I kind of overestimated it," Nelson said. "I didn't have any problems with it. I could feel the crowd's energy."

It would have been tempting to assume that the return of spectators would put road teams at more of a disadvantage this year, particularly after a season without fans. While the sample size is small, early results suggest that isn't necessarily the case. 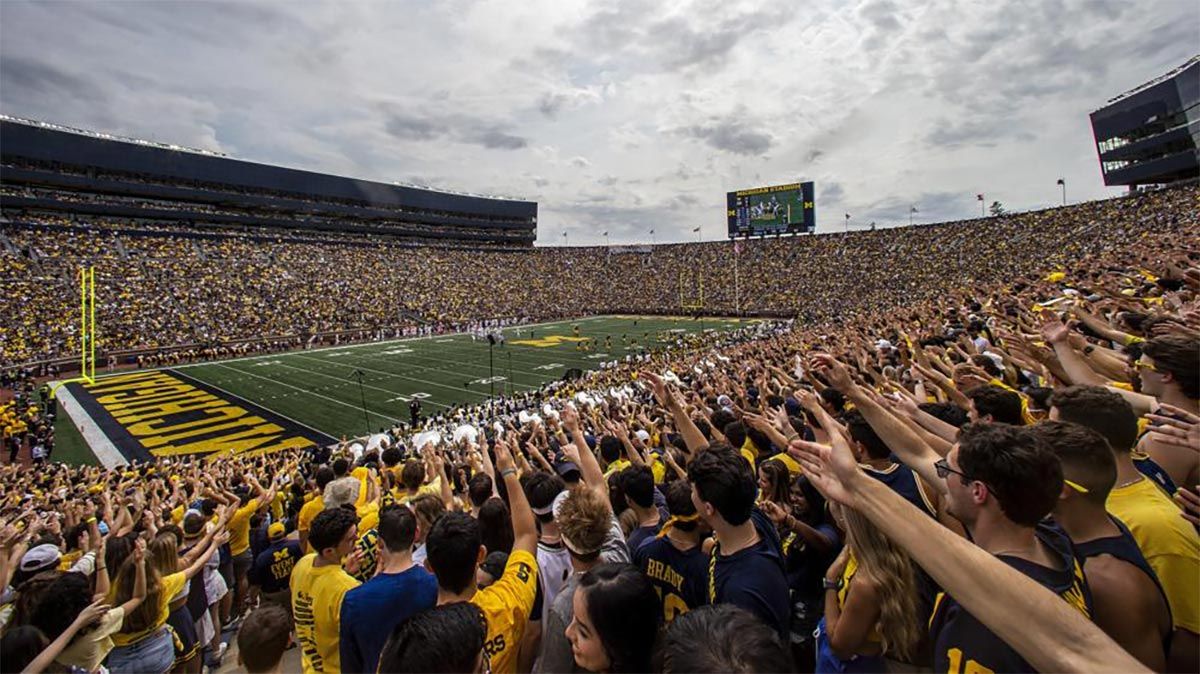 Those road upsets were particularly sweet with fans back in the stands.

"It just motivated you to do your best," Penn State quarterback Sean Clifford said. "Last year with the piped-in noise, there was no real enthusiasm. It was fun to go into someone else's house again and be able to silence them with big plays."

Whatever the early results suggest, teams believe they do need to adapt to this major difference from last season.

"Just to be able to deal with the noise on third downs, especially for an opposing team's offense and communication and all of that, it affects guys jumping offsides and being slower on the snap count and getting a jump on things," said Indiana coach Tom Allen, who emphasized that he wasn't blaming any of those factors for his team's 34-6 loss at Iowa.

Conventional wisdom suggests the offenses face more of an adjustment with the return of fans because crowds often generate the most noise when the home team is on defense to cause as much of a distraction as possible.

Ohio State coach Ryan Day cited the difficulty the offense occasionally had during the season-opening victory at Minnesota.

"It was loud on third down, and we had to handle that, and we did have a couple of false starts where we could have done a better job of in that case being louder and more deliberate and all of that," Day said.

But the defenses also face a challenge, even if they use visual signals whether it's noisy or not.

"It does cause different issues, whether it's substitution issues or just pre-snap, post-snap communication," Leonhard said. "Our defense relies on it."

Sometimes that caused its own distractions.

"I'll be honest, probably the loudest game I was in was Northwestern last year with just the speakers, because they would play a wildcat noise and it was louder than anything," Nebraska guard Ethan Piper recalled. "It was terrible noise."

They prefer the noise created by actual fans.